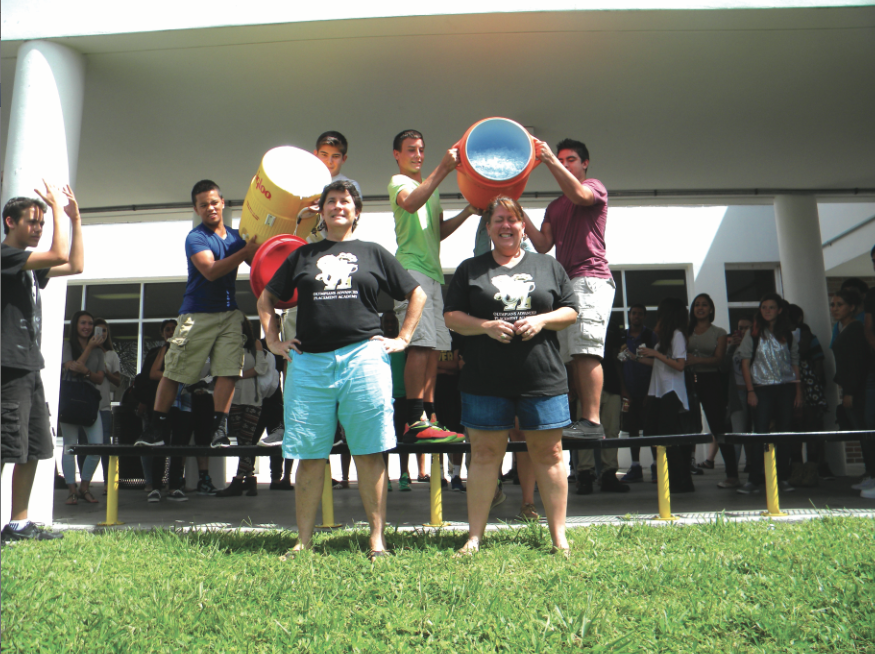 Social Studies teacher Renee Manwaring (left) and English teacher Kelly Lawrence prepare to get doused with ice water as they take part in the ALS Ice Bucket Challenge in front of hundreds of students during first lunch on the second day of school.

On Tuesday, August 19, in front of close to 1,000 students during first lunch, Ms. Kelly Lawrence, English teacher, and Ms. Renee Manwaring, social studies teacher, participated in the rave that has been storming the nation: the Amyotrophic lateral sclerosis (ALS) ice bucket challenge.
The concept is simple: if an individual is nominated, he or she has 24 hours to pour a bucket of ice water over his or her head, or donate $100 to the ALS Association. Then, the person will nominate three more individuals who have 24 hours to do the same thing, contributing to the domino effect that has taken the nation by storm.
The reason behind the millions of freezing cold people is simple: to raise awareness. ALS, better known as Lou Gehrig disease (named for the famous New York Yankees player was diagnosed with the illness in 1939), is a nerve disease that is caused by the rapid degeneration of motor neurons, slowly paralyzing the afflicted until they become completely emaciated by the lack of muscle. The result is death.
“The ice bucket challenge was an ingenious method to raise funds and awareness for an incredible debilitating disease,” claims Ms. Linda Pearson, science teacher and an ice bucket challenge participant. “Its varied success shows us how involved people are willing to get when given the opportunity.”
The ice bucket challenge is being recognized nation-wide, from pro-athletes to congressmen to movie stars, all who very willingly pour ice water on their head and/or donated to the cause. Some of the celebrities participating include soccer player David Beckham, pop-singer Lady Gaga, and even Kermit the Frog of the Muppets.
This challenge reached new heights when actor Charlie Sheen, (“Two and a Half Men”) dumped cash over his head instead of ice water. He donated $10,000 to the ALS cause, and he continued that by challenging other big time stars such as Jon Cryer and Ashton Kutcher to either dump ice water over themselves or match his donation.
“The ice bucket challenge has been attacked by many as not focusing on the problem at hand,” states junior Emily Addeo. “The point of it is to spread awareness, which it definitely has. My only fear is that people aren’t donating what they promised.”
According to the ALSA, people have been more than generous to the organization. The ice bucket challenge has raised over $94 million in the United States to fund research and a possible cure for the disease.