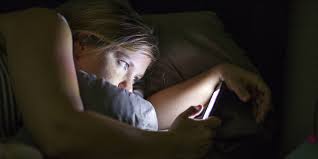 We live in era in which smart phones and technology dominate our daily lives. Along with this technology comes the social media that teenagers go to during their free time. Social media has heavily influenced teenagers all around the world and contributed to their wide knowledge of their surroundings and social standards; however, it also plays a role in the mixed up and unpredictable sleeping schedules teenagers have now adapted to.

A study involving over 270,000 adolescents from the eighth, 10th and 12th grades conducted from 1991 through 2012 showed that while nine hours is the standard recommended by the National Sleep Foundation, many teens are likely to get around seven hours of sleep.

Senior Kaitlin Thompson believes the greatest effect comes “when people use it right before they go to sleep.” According to a new research from Brigham and Women’s Hospital, reading from a screen before bed not only makes it harder for students to fall asleep, but also impacts how alert they are the next day.

Now what would it be like to have a classroom filled with sleepy teenagers that didn’t get enough sleep the night before? They wouldn’t have the energy to grasp any of the information given in classes. Much of the blame can be placed on the impact electronic devices have on sleeping schedules. Senior Shayna Soares adds, “When you go on the computer or on your phone right before bed, it makes it harder to sleep because our brains think we should be awake.”

Let’s face it: the first thing many students do first thing after waking up is reach for the phones. Who hasn’t felt that familiar sting as their eyes adjust to the brightness of the screen? Checking one’s phone first thing in the morning and being on that phone for a prolonged time before going to sleep both contribute to decreasing a student’s ability to remain alert during class.

The more technology advances, the more teenagers get hooked on the latest advancements. Social media and electronic devices have become a large part of students’ lives. While social media certainly can be an asset to a student’s education, it all comes down to when it is being utilized. When social media starts interfering with the sleep cycle, the possible educational benefits of its use are negated.