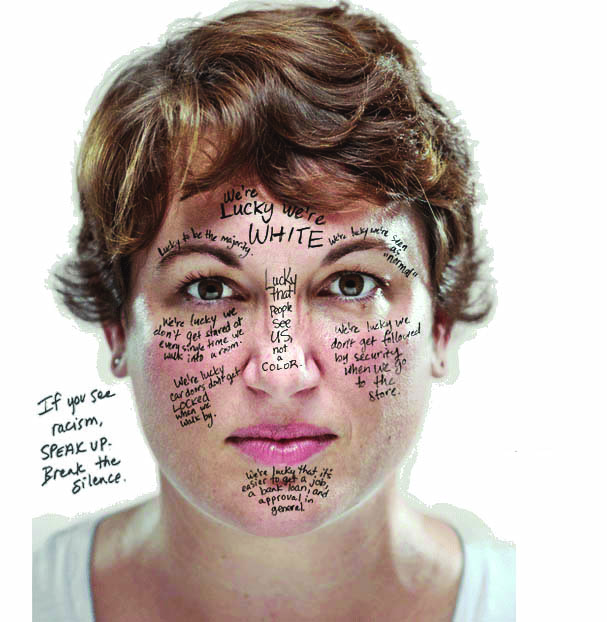 This article appeared in the October 2015 issue of the print edition of THE TORCH as a part of the center spread feature titled “Blind to Our Own Bigotry.”

“White privilege.” If asked whether this is a real issue in today’s society some would agree wholeheartedly and some would argue vehemently that it is a made-up concept. Which side of the argument one ends up on is often directly related to the color of that person’s skin.

Reasonable people should be able to agree however that white privilege does exist to at least some degree. White privilege is the societal privileges that benefit white people in Western countries beyond what is commonly experienced by non-white people under the same social, political, and economic circumstances.

Upon hearing the term, most white people assume it is an attack upon them. They believe it is being used to accuse white people of being inherently racist, but that is not the case. White privilege, while a product of racism inherent in a predominantly white society, runs deeper and is a part of the oppression non-whites face throughout their lives that white people don’t experience as a result of their skin color.

In many instances, white privilege comes into play in everyday circumstances. From being denied a job based on the color of their skin or having to sit through seeing white people get away with blatant racism, people of color (POC) face the discrimination that white people rarely have a problem with.

A specific example would be when Rashid Polo, an African American male, posted videos of himself walking around a store while being tailed by a white employee. Throughout the course of the video, the clerk kept a close distance from Polo while keeping an eye on him.

Black people being seen as “thieving thugs” perpetuates discrimination against them while striking the false threat of their presence. On the other hand, there is rarely a double takes when a white person walks into a store to shop. No sly looks of suspicion from employees and definitely no one following their every move around the store.

White privilege can even be seen in the media. The predominant race on television and in movies is, of course, white. The “token” black friend is even a common television trope that clearly shows the lack of black characters on television.

Some white people do not understand the effects this misrepresentation of POC has. They have no trouble seeing themselves portrayed because all they have to do is turn on the TV.

In 2012, the University of Southern California conducted a study explaining the lack of representation for people of color. “Across 100 top grossing films of 2012, only 10.8 percent of speaking characters are black, 4.2 percent are Hispanic, five percent are Asian, and 3.6 percent are from other (or mixed race) ethnicities.“ The study also showed how these roles were portrayed in a negative and stereotypical way.

Common stereotypes of POC characters include the “smart Asian student” or the “loud, sassy black woman,” while white characters contain the more complex personalities and storylines. This act of white-washing adds to the systematic stereotyping that people of color have been trying to destroy for years.

A large majority of white people assume that they gained their achievements solely on their hard work, but their fair skin and privileged position is a determining factor in their success. “I hate the fact that no matter what, I’ll always have to work twice as hard to be seen as worthy as white people are,” says senior Lou-anne Clerger.

Is it not surprising that even in today’s so-called “progressive” society that so many white people will still deny the existence of the privilege they have enjoyed their entire lives? Can the playing field ever be made even for POC when there is a denial that the imbalance even exists? There can be no doubt that POC are still at a distinct disadvantage in today’s society. One that they won’t be able to overcome until that disadvantage is recognized by people of all colors.