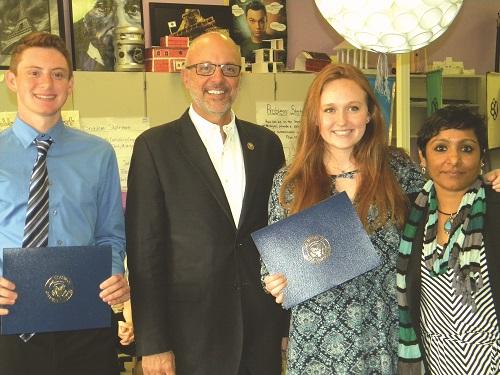 Spector and Cunningham were presented with official U.S. Congressional certificates of commendation for their accomplishment by District 21 Rep. Ted Deutch on Feb. 18 in Engineering teacher Ms. Nirmala “Miss Nimmi” Arunachaalam’s classroom. The winning apps from across the country will be displayed in Congress on March 1.

Spector and Cunningham winning entry is the Number Ninja app, designed to help students understand and practice math concepts. The app deals with lessons ranging from how to calculate the slope  of a line between two points to Pythagorean theroum.

The Congressional App Challenge is aimed at encouraging high school students to learn how to code by creating their own software application for mobile, tablet, or other computing device on a platform of their choice. The entries were judged by a panel of local computer science professionals and Congressional representatives.