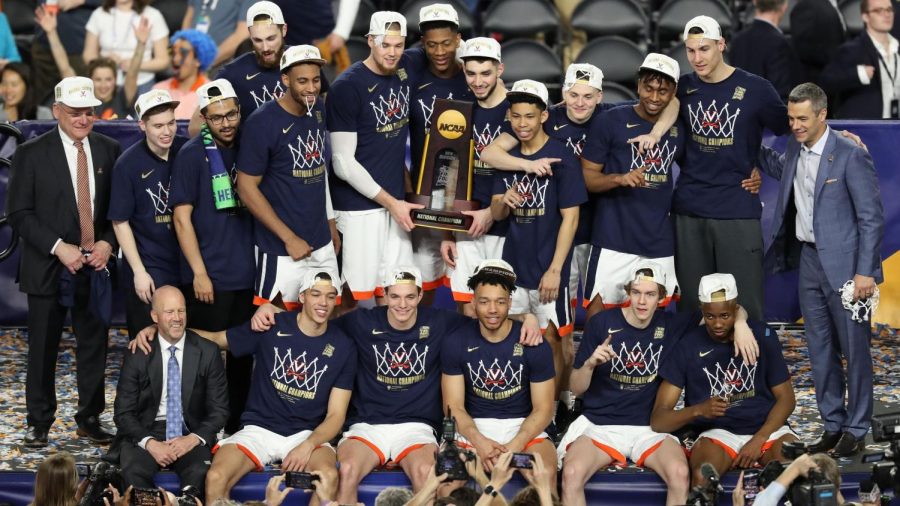 By winning the 2019 NCAA Men's Basketball Championship, the University of Virginia became the first team to win the title after being eliminated in the previous year's tournament's first round.

Year after year, when March rolls around so does the madness of college basketball’s greatest spectacle: the NCAA Men’s Basketball Championship Tournament aka March Madness. A panel of sports writers, analysts, and athletic directors hand pick sixty eight teams, divide them into four regions and seed them one to sixteen. To win the National Championship, a team has to win six straight games, the first four coming in its own region, and then the other two are against winners of the other region.

The 2019 tournament, similar to every other year, brought us many storylines. Every year there are underdogs beating favored teams, no matter how good the favorite is. In the first round – the round of sixty four – there were twelve teams that beat a team that was seeded higher than them, including surprising upsets by thirteen seed UC Irvine over four seed Kansas State, and a series of upsets by twelve seeds; Liberty, Oregon, and Murray State, over five seeds. This year’s second round – the round of thirty two – was the first time since 2009 that there were no upsets.

In the Sweet Sixteen, the first one seed, The University of North Carolina, fell to five-seeded Auburn by a whopping seventeen points. Other upsets coming in the Sweet Sixteen were two three seeds, Purdue and Texas Tech, beating the respective two seeds in their region.

Going into the Elite Eight, there were three one seeds left in the tournament, Duke, Virginia, and Gonzaga, but after the round had ended, Virginia was the only one left standing. After two wins by a combined three points, the overall one seed Duke Blue Devils faced their toughest opponent yet, The Michigan State Spartans, in an Elite Eight showdown. The game was back and forth for the entirety of the forty minutes, including ten lead changes and eight ties, with Duke’s biggest lead being nine and MSU’s seven. MSU came out on top 68-67 on a clutch, go-ahead three pointer by forward Kenny Goins, and a missed free throw from Duke’s R.J Barrett. Gonzaga ended up losing to the eventual tournament runner up, Texas Tech by six points in the Elite Eight round.

With 5:24 left in the game, Virginia was up by ten and no one believed that Auburn had a chance to come back. But defying all odds, Auburn completed the comeback, and with 0:17 left Anfernee McLemore hit two free throws to put Auburn up by four. Virginia raced down the court and the ball found its way to Kyle Guy, Virginia’s best three point shooter, who hit a three from the corner to put Virginia within one. Right after that, Virginia fouled Auburn’s point guard, Jared Harper, who stepped to the line and made one out of two free throws. Virginia pushed the ball down the court, but at half court, Virginia point guard Ty Jerome dribbled the ball off of his heel and proceeded to pick it up and start dribbling again. By rule that is a double dribble, but everyone watching that game including the refs, did not notice it.

That no-call led to Guy’s missed three point attempt, but he was fouled on the shot attempt. That put Guy at the free throw line for three shots, and he drained all three. The no-call on the Jerome double dribble and the foul call have been “the talk of the town,” even after the national championship game, because if either had gone the other way, Auburn would have moved on to the championship game instead of Virginia. Although by rule the play was a foul because the defender didn’t allow for the shooter to land, the argument against the call was that the refs were deciding the game instead of the players.

In the National Championship game it was one vs. three, Virginia vs. Texas Tech. The game stayed close, coming down to the wire. The game was tied at the end of regulation after a few missed jump shots by both teams, so the teams went into the first overtime period. At that point, Virginia ran away with the game, winning 85-77.

This was the first time in tournament history that a team got knocked out of the round of 64 the previous year only to come back to win the championship the following year. This was a huge win for Virginia because last year they were the first one seed ever to lose to a sixteen seed.

Some of the top performers of the tournament included Murray State’s Ja Morant, who recorded the first triple-double of the tournament since Draymond Green did it for Michigan State in 2012, with 17 points, 16 assists, and 11 rebounds against five seed Marquette.

Dylan Windler of Belmont had 35 points to go along with 11 rebounds in a first round loss to Maryland.

Jordan Burns, from Colgate, scored 32 points in their first round game,a 7-point loss to the two seed Tennessee.

Caleb Homesley had 32 points in Liberty’s first round upset over Mississippi State, but got knocked out in the next round. Losing to four seed Virginia Tech.

In UCF’s first round game against VCU, 7’6” Tacko Fall, had 13 points, 18 rebounds, and an incredible five blocks to lead the Knights into the second round.

In Gonzaga’s round of 32 game, forward Brandon Clarke poured in 36 points and eight rebounds in  a 12 point win over Baylor.

Also in the round of 32, Purdue and Carsen Edwards put on a show vs. Villanova, as Edwards scored 42 points, a new career high. Edwards stayed hot, and in their next game against Tennessee had 29, and followed that game with 42 points in a loss to Virginia.

To add on to all of the madness, college basketball enthusiasts annually enter themselves into bracket pools, which is where a person picks all 67 of the games that will be played in the tournament, and the person with the most correct picks wins the pool. Never in history has a person picked every single game right.

That is because there is a 1 in 9.2 quintillion chance that someone will fill out a perfect bracket, but this year a man by the name of Gregg Nigl had every single game right up until the Sweet Sixteen. If his bracket would play out exactly how he had predicted, the payout would have been one million dollars, but during the third round of the tournament, everything went downhill for Nigl. Not only is it incredible that his bracket was perfect through 48 games, but the fact that Nigl didn’t really know much about college basketball makes the storyline that much more intriguing, Nigl picked the winner of the games based on factors such as if he knew someone that went to the college, or if he liked a team’s colors.

Once again, March Madness really lived up to its hype and its name. With all the upsets and incredible individual performances, it is really the most entertaining three weeks in sports.