OPINION: While Donations to Rebuild Notre Dame Cathedral May Be Well-Intentioned, the Money Could Be Put to Better Use 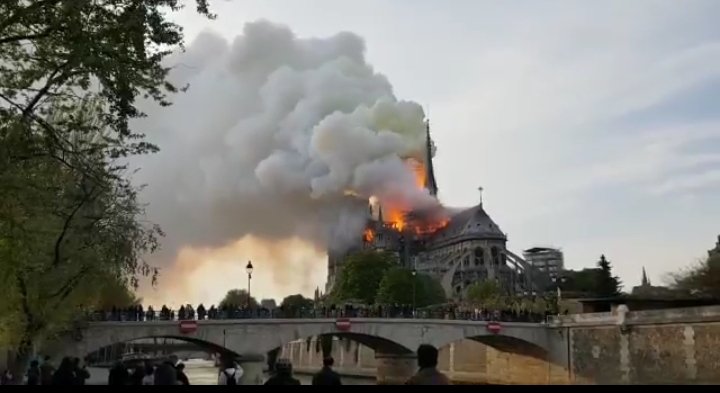 Over one billion dollars was raised to rebuild the Notre Dame Cathedral in Paris which caught fire on April 15.

The whole world looked on in shock as Notre Dame, the iconic 856-year-old cathedral in Paris, was engulfed by flames on April 15. The video of the cathedral’s spire collapsing into the fire was both horrifying and mesmerizing to watch. People wept as they worried that the important cultural and historical monument might be lost. In response, the world came together to show their support and send donations for the cathedral’s reconstruction.

Approximately $1 billion was raised for the cathedral in only two days. The first major donations were pledged before the fire was even over. François-Henri Pinault is the CEO of Kering, which owns luxury fashion brands such as Gucci, Yves Saint Laurent, and Balenciaga. Pinault donated $112 million; his rival Bernard Arnault, who is the richest person in Europe, followed soon after with a donation twice the amount. Later, the Bettencourt Meyers family who owns L’Oréal and the CEO of French oil giant Total made similar contributions as well.

While the flood of support for Notre Dame was certainly a beautiful moment of unity, it also brought some uglier realities to light. The fact that so many millionaires and billionaires were more than eager to outdo one another in making the biggest donations shows that lack of capital is not the issue when it comes to solving the world’s crises. This raises the question as to why there is not similar support for organizations that are working to combat more dire and life-threatening issues. It also showcases that some cultural losses are seemingly less valued than others by society.

Even within France, many people were upset by the massive amounts of money given for the cathedral when there are nearly 30,000 homeless people in Paris. In some Parisian neighborhoods, over 40 percent of all residents live below the poverty line. In recent months, anger over economic inequality has led to protesters in the streets known as the Yellow Vest movement. The Notre Dame donations further fueled class resentment and protests by the Yellow Vests.

For one, the Catholic Church is already a very rich organization. Its exact wealth will likely never be known since the Vatican Bank has faced embezzlement and fraud scandals and some countries (including the U.S.) don’t require religious groups to release financial statements. However, it has been reported that the Vatican Bank manages $64 billion of assets and keeps gold reserves (much of which was exploited from colonies such as South America under the Spanish) worth more than $20 million with the U.S. Federal Reserve. This is of course not to say that churches don’t deserve donations, especially for restoration efforts, but it is important to keep in perspective which institutions might have the biggest need for financial help.

In sharp contrast to the successful funding of Notre Dame, there are struggling aid campaigns such as the UN’s efforts to bring food to the starving people of Yemen who are experiencing the “world’s worst famine in 100 years.” In October 2018, the UN said that over 85,000 children under the age of five may have died because of starvation. Thousands of Yemeni civilians have also been killed in bombings by Saudi Arabia.  The ongoing conflicts all over the Middle East have sparked a refugee crisis and have caused the destruction of culture as well. Many might not consider that the Middle East, which was once the cradle of civilization, is home to numerous architectural feats that are hundreds if not thousands of years old; many of these have suffered from the consequences of war.

Furthermore, there is the Muslim Uighur minority in the Chinese territory of Xinjiang that is experiencing systematic persecution. Reportedly over a million Uighur and Kazakh Muslims are imprisoned in a network of detention camps. Uighurs face religious repression and are closely surveilled by the Chinese government. Before and after satellite images are circulating the internet showing that mosques in the region are disappearing. Out of 800 mosques, at least 200 have already been destroyed. For example, the Keriya mosque (thought to be built in 1237) was photographed in 2016 with thousands of worshippers leaving, but by 2018 the site where it had stood was completely empty.

Brazil’s National Museum in Rio de Janeiro burned down last September in a preventable fire caused by governmental neglect and a dire lack of funding and resources. The 200-year-old museum housed millions of priceless specimens, including some of the oldest and rarest dinosaur fossils. It had countless precolonial South American artifacts and protected indigenous Brazilian cultures with its collection of audio recordings of indigenous languages, some of which are no longer spoken. Irreplaceable heritage and history was lost, yet the event was barely recognized on the world stage.

For problems closer to home, one need only to look at the water crisis in Flint, Michigan. The city has not had safe drinking water since 2014, and the city estimated that it would take about $55 million to reestablish the ability to deliver clean water to its citizens. Twelve people have died from the tainted water. Also, between March 26 and April 4 of this year, three historically black churches in the same Louisiana parish were burned down. These acts of arson were likely connected hate crimes. Luckily, awareness raised during the Notre Dame fire led to a surge in donations for these black churches, with their GoFundMe campaign reaching $1.8 million.

Environmental projects are also worthy causes in need of support. For instance, the billion dollars could have been put to very good use in cleaning up the Great Pacific Garbage Patch, a gyre of microplastics in the ocean between Hawaii and California. It is the largest accumulation of ocean plastic in the world, forming an area three times the size of France. Plastic poses a great threat to marine wildlife, strangling and suffocating species and poisoning animals that ingest it. It will only become increasingly difficult and expensive to address environmental concerns such as this as time progresses.

Everyone should be glad and grateful that Notre Dame will be able to be restored to its former glory thanks to donors’ generosity, as it is a beautiful monument and a significant symbol for both Christendom and France. However, acknowledging that there are more important issues that should probably be solved first is not an expression of ingratitude. Let us not forget the people facing difficulties all over the world who are in need of help as well. At the very least they deserve to have their struggles known.