OPINION: Olympic Heights and school district would do well to consider cutting ties with Chick-fil-A 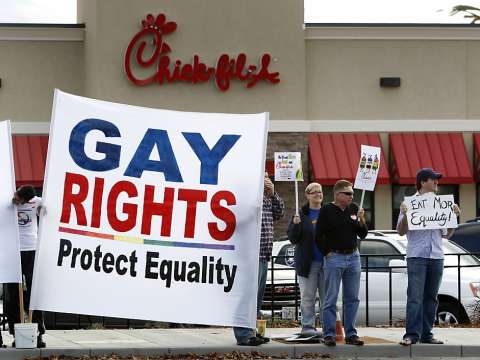 Chick-fil-A has been in and out of the news for several years, and America’s third-largest fast-food chain is once again in the spotlight for the controversy related to its financial support of anti-LGBTQ organizations. That controversy makes one wonder why Olympic Heights and the School District of Palm Beach County are in a business relationship with a corporation that seemingly works against the best interests of many of its students and employees.

The uproar began in 2012 after chairman, president, and Chief Executive Officer Dan T. Cathy made comments opposing same-sex marriage, stating that gay marriage is “inviting God’s judgment” and that he believes in the “biblical definition of the family unit.” The backlash to Cathy’s comments and the revelation that Chick-fil-A donates millions of dollars to organizations with anti-LGBTQ agendas sparked the original boycott that continues to this day.

The lengthy boycott has in the past year expanded to some cities and college campuses refusing to allow Chick-fil-A franchise openings, eventually leading Chick-fil-A to announce on Nov. 18 that starting in 2020, it will no longer be donating to the organizations that have anti-LGBTQ agendas. The announcement stated that the Chick-fil-A Foundation will only donate to Junior Achievement USA, Covenant House International, and local food banks in order to promote youth education, combat youth homelessness, and fight hunger.

However, just two days after making that announcement, in response to backlash from Christian conservatives, Chick-fil-A amended their announcement with Chief Operating Officer Tim Tassopoulos refusing to say that the company would not donate to groups that oppose LGBTQ rights in the future, telling Vice Magazine, “No organization will be excluded from future consideration – faith-based or non-faith-based.”

OH’s relationship with Chick-fil-A over the years has included the Town Center Chick-fil-A franchise being a current “business partner” of the OH Academies Program and the selling of Chick-fil-A sandwiches as various fundraisers. Chick-fil-A has been a Corporate Partner of the school district for a number of years, and In 2017 was inducted into the Palm Beach County School District’s Business Partner Hall of Fame for being a “major financial contributor for the 185 schools in our district.”

At the Sept. 20, 2019, OH pep rally, the Chick-fil-A cow mascot made an appearance to promote one of those sandwich-selling fundraisers. Many in the crowd went wild and eagerly snagged one of the coupons that were handed out, but others looked visibly disturbed, particularly so when OH’s own lion mascot got down on both knees to bow to the cow. While this was clearly meant as a funny gimmick, to onlookers who are a bit more conscious of the company’s reputation this was quite unsettling. Something about seeing your school mascot, which is supposed to represent the entire student body and the spirit of togetherness, bowing down to an establishment that promotes anti-LGBTQ beliefs just doesn’t sit right.

OH principal Ms. Kelly Burke, commenting on the school’s and the district’s relationship with Chick-fil-A points out that Chick-fil-A is an “appropriate business partner” as per school district corporate partnership policy and that “they supply meaningful resources to the district and are a strong proponent of public education.

On the Town Center Chick-fil-A partnership with the OH Academies, Academy Coordinator Ms. Anita Foster comments that OH students are participating in the Chick-fil-A Leadership Academy wherein “one of the members of the management team comes into the classroom once a month and provides leadership lessons and assists with service projects that benefit our community and school.”

Foster goes on to add, “We appreciate the support that all of our business partners provide to each of our academies by giving our students real world experiences through field trips, internships, guest speakers and sponsorship of academy events.”

When contacted for comment on why the school district is partnered with Chick-fil-A, District Business and Community Partnership Liaison Mr. Jimmy Lee Peterkin, Jr. referred The Torch back to Ms. Burke.

For those looking for specifics on the company’s controversial donation practices, Equality Matters reports that the Cathy family donated over $1.9 million to anti-gay groups in 2010 through the WinShape Foundation, a charitable giving organization founded by the Cathy family that receives nearly all its funding from Chick-fil-A. This included gifts to the Marriage & Family Foundation (a group opposed to both divorce and gay marriage), the Fellowship of Christian Athletes (a sports camp that requires leaders to sign a “statement of faith” that includes a “purity statement” prohibiting “sex outside of marriage” and “any homosexual act”), as well as Exodus International (a group that promotes conversion therapy).

By 2017, Chick-fil-A was still donating $1.65 million to the Fellowship of Christian Athletes. The company also donated $150,000 to the Salvation Army, which is an evangelical church and has allegedly discriminated against employees in same-sex marriages and turned away transgender individuals from shelters. A Salvation Army media relations director once said that gay people deserve death, and the NYC Commission on Human Rights charged the Salvation Army with discriminating against transgender patients at four of its substance abuse centers. Additionally, tax returns from 2017 revealed a $6,000 donation to the Paul Anderson Youth Home, a Georgia-based “Christian residential home for troubled youth” that, according to ThinkProgress, teaches that same-sex marriage is a “rage against Jesus Christ and His values.”

Recently, outrage erupted on social media that Chick-fil-A was helping “kill gays in Uganda.” While exaggerative, this claim was born from the fact that on October 10, 2019, Uganda’s Minister for Ethics and Integrity Simon Lokodo told Reuters that the country intended to revive a failed 2014 bill (known as the “Kill the Gays” bill) that would make homosexuality punishable by death.

So how is this connected to Chick-fil-A? Well, the National Christian Foundation has sponsored projects to oppose LGBTQ rights in Uganda and sent American pastors to meet and train anti-LGBTQ Ugandan ministers. From 2008 to 2011, the NCF received donations from Cathy’s WinShape Foundation. It was during this time that the original bill was first being devised and promoted, meaning that there is truth in saying Chick-fil-A money has indirectly funded anti-gay legislation and programs abroad.

Even though the company now claims to be changing its donation strategies for at least the coming year, for many people the damage has been done, and the company’s reputation is tarnished.

LGBTQ advocacy organizations such as GLAAD advise “cautious optimism,” as “Chick-Fil-A still lacks policies to ensure safe workplaces for LGBTQ employees and should unequivocally speak out against the anti-LGBTQ reputation that their brand represents.” Furthermore, the chain made similar promises to cut ties with anti-LGBTQ charities back when this controversy first surfaced years ago, but backtracked on that pledge.

And, the Chick-fil-A questionable track record on equality is not limited to its controversial donations. Back in 2002, a Muslim employee sued the chain for religious discrimination, claiming he was fired for refusing to pray to Jesus with other employees at a management training. ThinkProgress also reports that Chick-fil-A does not include employee protections for discrimination based on sexuality and gender identity.

At this point, the real question is more about what we as a society are willing to accept. Clearly, we are fine with ignoring ugly truths in favor of our personal convenience. People love Chick-fil-A and seemingly aren’t willing to give up their juicy chicken nuggets and savory sandwiches, as evidenced by the company’s continued profitability. An OH student wishing to remain anonymous admits that while she does not agree with the company’s views and actions, she would never give up eating there because the food is “so delicious.” On the other hand, OH senior Alicia Coronho and English teacher Ms. Stephanie Bachar both think it is impossible to support a company without supporting their beliefs. Coronho reasons that “you are giving them money to do the thing you don’t ‘support.’” Bachar says, “Once someone buys a product, they buy into the beliefs of the company.”

Obviously, OH and other Palm Beach schools are benefiting from a business partnership with Chick-fil-A. It is inarguably a good thing to help out local schools and further their academic and extracurricular programs. But is it ethical for schools to collaborate with and enable establishments that have hurt others, even if it might benefit them financially? These are concerns that we should be addressing rather than ignoring. Other schools around the country have already cut ties with Chick-fil-A over its controversies.

In October, the principal of Lusher High School in New Orleans chose to decline serving free Chick-fil-A at an employee lunch “out of respect to [their] LGBTQ staff,” as “it is not part of Lusher’s culture of kindness and community.” In another instance, the board of Pittsburgh Public Schools voted to oppose Chick-fil-A as a corporate sponsor for the Pittsburgh Kids Marathon and Kids of Steel program last year. The school board resolution proclaimed, “The family-owned, privately held restaurant company … sends the wrong message to LGBTQIA+ children and families who face psychological abuse and experience the effects of bullying at disproportionate rates.”

It is time for Palm Beach County schools to be more considerate towards the LGBTQ community and mindful of their feelings as well. It has been estimated that roughly ten percent of the human population is gay. Many faculty members and students openly identify as being LGBTQ, and one can assume that there are even more who are not open about it. Coronho, a student vocal about her bisexuality, reveals that she tries to “stay away from Chick-fil-A” because the company has done things that are “completely outrageous.” She adds, “I don’t really think a school has any business associating itself with Chick-fil-A.” Fellow LGBTQ senior Austin Browne thinks the PBCSD’s partnership is wrong “due to the company’s issues with the LGBTQ+ community” and that the partnership only serves to “further alienate a community that is already discriminated against constantly.”

Bachar echoes this sentiment, expressing that the relationship is inappropriate because “it contradicts the values encouraged in schools.” She elaborates, “They [the school district] hand out ‘We’re All In’ badges for teachers to wear but support a company that goes beyond bullying and funds traumatic practices under the guise of religion. The PBCSD protects employees who are LGBTQ but sells the products of an anti-LGBTQ company to students. Supporting Chick-fil-A is a total contradiction and a message of hypocrisy to LGBTQ students and staff.”

Until there is concrete evidence that Chick-fil-A is taking serious action to change its image and make reparations to those it has hurt over the years, the School District of Palm Beach County and Olympic Heights would do well to consider ending their partnerships with Chick-fil-A and only partner with less controversial companies. Schools are supposed to feel like a second home and be an inclusive, welcoming place for all students and employees; by supporting Chick-fil-A and accepting them into our schools with open arms, we are forsaking that essential principle.