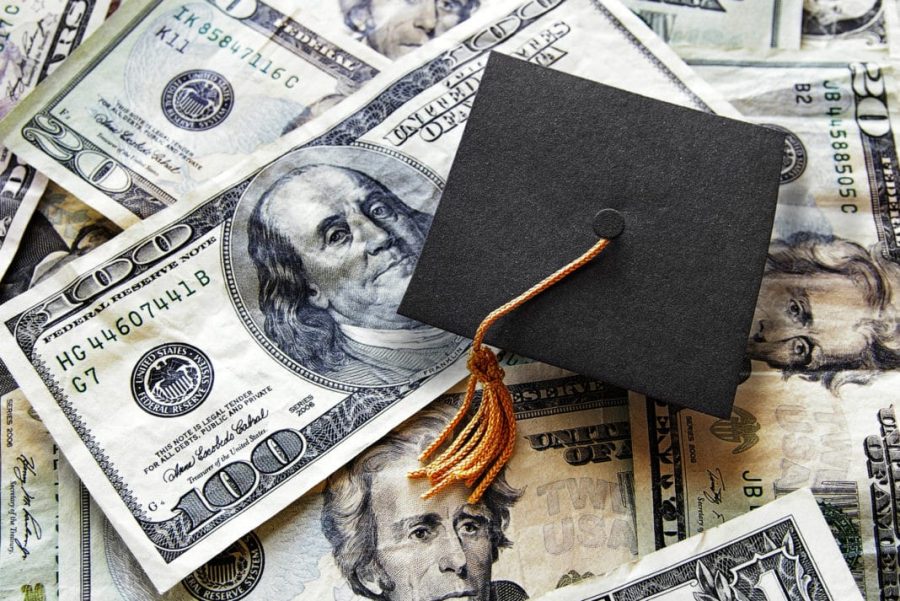 High school can sometimes feel like a long, never-ending tunnel. Freshman and sophomore year can still be struggles to which to adjust, and junior year can be overwhelming with difficult coursework and stressful college entrance exams.

However, there is a beacon of light at the end of the tunnel: senior year. Many students eagerly await senior year, as it is thought to be the best part of the high school experience. Senior privilege, no final exams, getting summer vacation a few weeks earlier than the rest of the school, and major events such as prom and Grad Bash are all perks of being a senior. But, not everything about senior year is fun and games; something that many students underestimate is just how hefty the price tag is.

To begin, there is the matter of the famed cap and gown. These iconic symbols of American education are staples at graduations at all levels, from preschool to college. Here at Olympic Heights, students must purchase their caps and gowns from a company called Herff Jones if they want to walk across the stage at graduation. The School District of Palm Beach County uses Herff Jones as their official vendor.

Some students have expressed concerns that Herff Jones is acting as a monopoly, but Mr. Carlos Ramon, an Economics and Government teacher at OH, sets the record straight. He explains, “The school district has a vetting process where they go and shop for various vendors for the same service. Technically, the district has the authority to choose the best vendor based on their costs, their price, and various other characteristics and intangibles that they’re in control of in terms of the budget, so that’s why [Herff Jones] is not considered a monopoly.”

The basic cap and gown order for OH students currently costs $56. Ramon asserts, “Supposedly, because the district shops for that same service or product, they’re getting the best price possible.” If graduates desire any additional memorabilia and/or apparel offered in  one of Herff Jones’s special “packages,” then graduates need to be prepared to be spending substantially more.

For some students, the graduation products are not worth the value. There are a few who have even said they would rather just not attend graduation at all. OH senior Nikola Zaklan says, “I think that they [Herff Jones] definitely overcharge in general, especially for just a cap and a rental gown.”

Fellow senior Matthew Shaw considers it unfair that “we have to pay money to walk along the stage with our peers, not to mention the fact that we don’t even get to keep our gowns.” He also declares, “It doesn’t make sense that a single business is the arbiter of our graduation status.”

Furthermore, the cost of taking senior portraits and purchasing an OH yearbook is quite steep. Seniors who want to have their picture in the yearbook must make an appointment at a Prestige Portraits studio, which has its nearest locations in Sunrise and West Palm Beach. The basic session costs $20 and includes getting a formal yearbook photo taken as well as ten poses in an outfit of the student’s choice. The deluxe session costs $35 and allows for more poses and an extra outfit. In past years, the OH yearbook let seniors select a formal photo and a casual photo. This year, only the formal photo is being used. And if a student actually wants to own the yearbook, that requires shelling out at least another $90!

So, what was the point of having the seniors pay for sessions at Prestige Portraits and wait to pose for countless photos in numerous outfits, only to not have any of those pictures go in the yearbook? The answer is that Prestige is now able to more effectively entice students and parents to purchase prints of the photos.  “A la carte,” or individual prints, normally cost $59, and package deals range from a $119 “Intro Package” to a $499 “Perfect Package.” Obviously, no family is under any obligation to make these purchases, but considering that students already made the effort to get the photos taken and that they won’t be seeing them in the yearbook, many are giving in to the ridiculously overpriced offers.

Many seniors have been lamenting the burden of the whole photo process. Some say the locations are too far away from them or are unwilling to waste their time and efforts. Shaw states, “I know it sounds kind of dramatic, but having to take time out of your day to spend three hours in a lobby waiting to get pictures taken is super annoying. I mean there are those who struggle to get food on the table and having to pay $20 or more to take a picture that you can’t even keep, and then spend even more on a yearbook, is insane.”

Other students, such as Meer Hossain, claim they merely forgot to set up an appointment in time to meet the Nov. 1 selection deadline for the yearbook photo. Clearly, an abundance of issues arise when the responsibility of yearbook pictures is completely placed upon the student.

It is a shame that people might be missing out on some of the most significant and memorable aspects of their final year of high school merely because of these reasons. Every senior should be in the yearbook so that their friends and classmates can see and remember that person for years to come. To not include someone in the yearbook and treat them like they don’t exist just because they didn’t spare the time or money to get their portraits taken at a studio is, frankly, disrespectful.

A fairer plan of action would be to offer seniors the ability to get their pictures taken at school for free, just as all the underclassmen yearbook pictures are done. Any seniors who want to drive to Prestige and have professional portraits taken with their choice of poses and outfits are of course more than welcome to. But this way, every single student would at least have a picture that could go in the yearbook.

The absurdity of the aforementioned prices becomes far more apparent when taking into consideration all the other costs that come into play during senior year. Many seniors attend the homecoming dance in the fall and the much-awaited prom in the spring.

Homecoming tickets usually cost $40, with prices being raised to $50 after a certain deadline. This year, there were complaints from students who say that they ordered their tickets but found them unavailable when trying to pick them up from SGA, leaving them no choice but to pay the increased fee at a later date. It has frequently been said in recent years that the quality of homecoming is not living up to its price tag. While the underwhelming food and decorations are areas of discontent, the most prevalent objection is about the music being played. Under the official “OH Hoco 2019” Instagram account, eighteen comments were left under the last post which had praised homecoming as “a success.” All of the comments were about students’ displeasure in the choice of music and requesting a different DJ.

OH’s prom has a far better track record than its homecoming dance, with a 2019 graduate assuring that it was “awesome.” Prom is held at a venue rather than the OH gym and is overall a more upscale event. So it is not surprising that prom tickets are more expensive, ringing in at $110. But this price becomes a bit hard to swallow when one takes into account all the additional costs that can come with prom such as outfits, hair and makeup, and transportation. The online service Thumbtack estimates that people hiring a makeup artist are “likely to spend between $50 and $150.” People spend at least as much money on an outfit as well. According to a 2015 national survey from Visa, the average total cost for prom is a whopping $919.

In addition, there are several fun trips open to seniors, most notably the Grad Bash trip to Universal Studios and Islands of Adventure. This trip costs OH students $140. However, there are other trips throughout the year organized by classes and clubs that seniors might want to go on as well, such as the Seaworld trip that was this December or the Epcot trip coming up in February, both of which have ticket prices in the $70 range. Some students are limited by their families’ financial capabilities and thus find themselves torn between having to choose one trip over the other. Shaw acknowledges this difficulty, saying that he really wants to go to Epcot but doubts he is able to afford both it and Grad Bash.

Aside from all these events and graduation-related costs, there are still academic expenses to examine as well. Every honor society and most clubs charge annual dues for membership, which can range from $10 to $30. Several honor societies also charge their senior members more than their underclassmen members, with the reasoning that the money is needed to purchase cords for graduation.

And let’s not forget college applications, tests, and test preparation! Registering for the SAT or ACT costs about $50, and tutoring for the tests is an option that many lower income families cannot afford. The average college application costs at least $30, but expect to pay $75 for some out-of-state schools and the Ivy Leagues. Of course, there are fee waivers available that eliminate the costs of test registration and college applications, but those only help people who are eligible for free or reduced lunch. Families who might not meet the benchmark income for eligibility but also do not have the extra money to spare on such expenses are at the biggest disadvantage.

Bearing these many expenses in mind, it is important for seniors and their families to start saving and planning accordingly right away. Being a senior means that you have many exciting opportunities and advantages offered to you, but unless senior year at OH becomes significantly less expensive, it is also likely that you will need to prioritize and make some difficult decisions. Ultimately, different experiences hold different values for every person. Seniors should put theirr money into the things they care about most and try not to get swept up in what “everybody else” is doing.