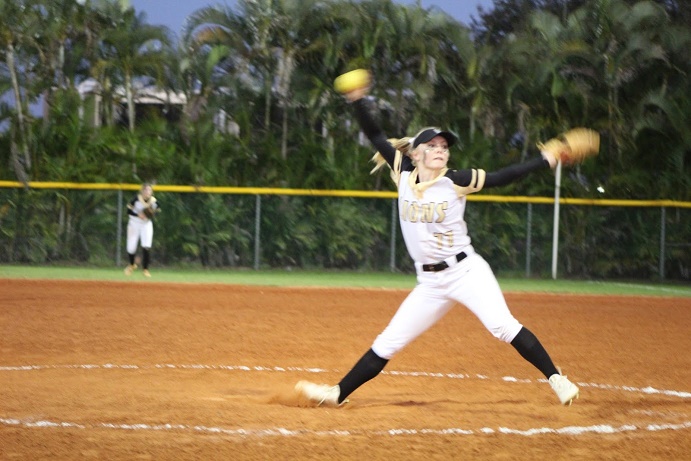 Both on the mound and at the plate, senior Kaitlyn Cunningham has been the catalyst to the Lions softball team's undefeated streak.

The last thing the Olympic Heights softball team and new head coach Dylan Lee needed was for the blistering streak the team is off to in its 2020 season to be put on hold. But that is exactly what has happened with the coronavirus forcing the closing of schools and the suspension of all high school athletics.

The Lions ran its record to 11 wins against zero losses with a 9-0 shellacking of Spanish River on Friday, March 13, the last day of athletics for Palm Beach District schools before the coronavirus shutdown. Over those 11 games, the OH squad has scored 103 runs while only surrendering four, with all four of the surrendered runs being unearned.

Leading the charge for the Lions is senior pitcher and FAU commit Kaitlyn Cunningham. Over 50 innings pitched Cunningham has given up only 22 hits and eight walks while striking out 52.

And she’s doing it with the bat, as well. Cunningham is leading the team in all of the triple crown categories with a eye-popping .677 batting average, three home runs, and 15 runs batted in.

Also getting it done at the plate are junior Avery Throckmorton batting .545, senior Alexandra Perez (.429), and sophomores Maddie Wicihowski (.419) and Hannah Zerbo (.419).

Cunningham says her goal in this her final year is to get to the state championship as the team has not advanced past regionals since she has been on the team. “With our new coach, I see some improvement with different strategies and different drills in the way we play the game,” Cunningham offers as a reason she believes this year’s team can make it to the state playoffs. “Incredible” and “amazing” are two words which Cunningham exclaims when thinking of winning a state championship.

Lee, who comes to OH from Somerset Canyons where he coached the middle school team,  was attracted to the Lions head coaching position when it came open at the end of last year based on the programs continued success and improvement over the past few years under the previous head coach Ms. Cindy Lucia. Lee felt he could make a significant impact and lead the team to consistent wins. Lee feels that his team has potential to make it to the state championship but only looks to today and the game ahead.

Junior Madison Manning, in her second season on the team, also sees improvement on the team this year due to the new coaching staff. On what she enjoys most about playing on the softball team, Manning explains, “I enjoy making memories with everyone on the team and being able to play with my best friends. I love going to war each game and being competitive on the field.”

If and when the Lions softball team gets back on the field, hopefully the memories Manning speaks of will include a trip to the state championship series.