Way too early Booms and Busts of the 2020 NFL draft 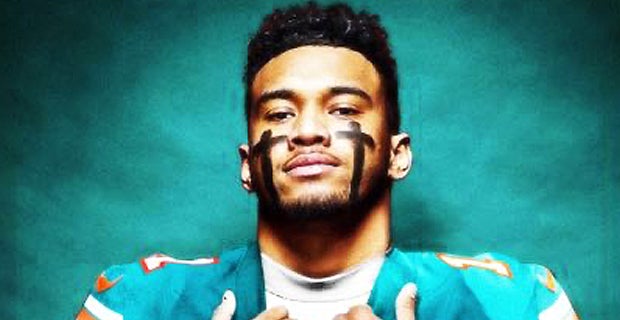 Does the Dolphins Tua Tagovailoa have the physicality to merit being the overall number five pick of the NFL draft?

Isaiah Simmons LB, Arizona Cardinals (Round 1/Pick 8): Simmons was the ultimate weapon last year for the Clemson defense. He took snaps in every position on the field including 239 as a box linebacker, 256 out of the slot, and 130 as the deep safety. Not only can he rush the passer of the edge, he can also cover receivers out of the slot. This versatility will give Simmons so much value on the defensive side of the ball for the Cardinals and he will be a top candidate for defensive rookie of the year. The player in the NFL most comparable to Simmons is Chargers safety Derwin James Jr. They both have the size and speed to play the safety position, but can also play inside the box and even rush the passer on occasion.

Tristan Wirfs OT, Tampa Bay Buccaneers (Round 1/Pick 13): Wirfs was considered by many to be the number one tackle in the draft, but for whatever reason, was the fourth off the board. Wirfs can play both on the right and left side, and is an absolute freak of an athlete. Coming out of the Iowa system that has produced names like Brian Bulaga and Brandon Scherff, Wirfs should be ready to start and make an impact in week one. It also can’t be understated that he is joining what might be the most high powered offense in the league this year after adding Tom Brady and Rob Gronkowski to an already stacked receiving core.

Xavier McKinney S, New York Giants (Round 2/Pick 40): McKinney is another one like Simmons in that he can play multiple positions, but he doesn’t have the same size. He is coming out of Alabama which runs an NFL like system with Nick Saban, so McKinney already knows what to expect at the NFL level. Although he won’t necessarily make an impact from day one, he will soon anchor this young Giants defense.

Jonathan Greenard DE, Houston Texans (Round 3/Pick 26): Greenard led the Florida Gator pass rush last season with 9.5 sacks and 15.5 tackles for a loss, so we know that he can produce at a high level. He has great size for an edge, but also has the explosiveness to get by NFL tackles. Greenard was a great pick for the Texans because he will get to learn from the best in the game, JJ Watt. With both of these guys rushing the passer from opposite sides, this defense should be a scary one this upcoming year.

Tua Tagovailoa QB, Miami Dolphins (Round 1/Pick 5). Tagovailoa came into the 2019 NCAA season as the projected number one quarterback in the 2020 draft, but an injury riddled season dropped him to the third best QB in some people’s opinions. He was very productive in college, but can’t take all the credit because of his star powered offense that featured two first round pick wide receivers this year, and two projected firsts next year. Tua also lacks some of the physical traits that make up most successful NFL quarterbacks. He is listed at six feet, but is more like 5’10” and unlike most shorter quarterbacks, is not very mobile. You can’t compare him to others like Russell Wilson or Steve Young because those guys are two of the most elusive quarterbacks in NFL history. He has all the arm talent to make every single throw on the field, but his lack of athleticism might prove to be too much to overcome to develop into a great quarterback.

Jedrick Wills OT, Cleveland Browns (Round 1/Pick 10): Wills is the most physically gifted tackle in the draft, but he lacks in technique. He is considered a “junkyard dog” because of his ridiculous size, strength, and athleticism, but scouts questioned his work ethic throughout college and that’s worrying. Wills is reminiscent of Oakland Raiders overall 2007 first round pick quarterback JaMarcus Russell, who was so highly thought of coming into the draft, but ultimately failed because of his lack of work ethic. Unlike Tua, Wills has all of the physical characteristics to be a great tackle in the NFL, so whether he is or is not is up to him.

Jalen Reagor WR, Philadelphia Eagles (Round 1/Pick 21): Reagor is highly regarded for his breakaway speed, but what most interesting about him is that he clocked in at a 4.47 in the 40-yard dash at the combine, but at his virtual pro day he ran a 4.22. The difference in those two times may not mean anything in the long run, but it can’t be totally ignored. In his final season at TCU, Reagor racked up a mere 43 catches for 611 yards and five touchdowns, which may be a cause for concern because the other first round receivers in this class had very productive final college seasons. Reagor was also the pick right before Justin Jefferson, who as we know had an incredible season last year with 111 catches, 1540 yards, and 18 touchdowns at LSU.