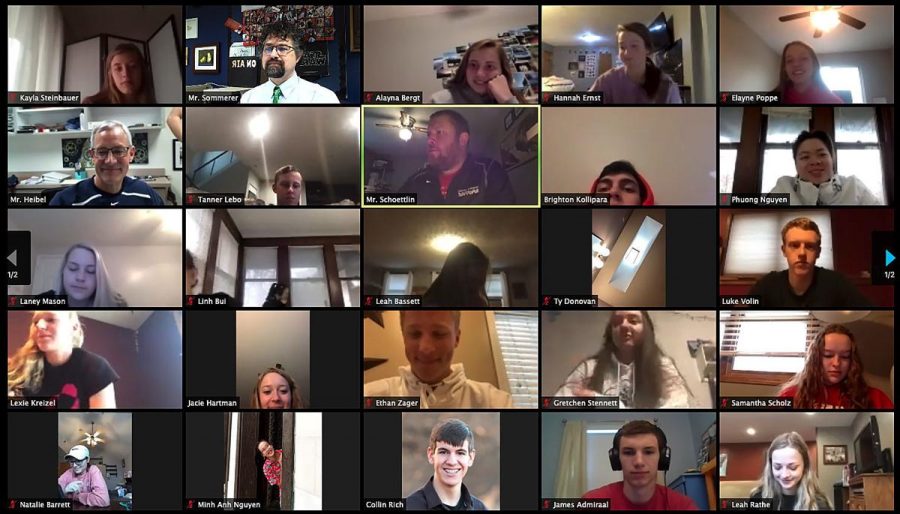 In the unprecedented time of a pandemic, routine things such as returning to school have become anything but routine. The return to online distance learning, albeit with stricter parameters for teachers to follow, has been a bumpy one in the first couple weeks with unusual and frustrating experiences occurring during live class sessions throughout the country. Students and staff have had to deal with some various problems ranging from the frustrating to downright bizarre.

Olympic Heights is no stranger to this, as students and teachers have reported strange happenings during their classes. English teacher Ms. Vanessa Koher has tales of being removed from her own Google Meet sessions, but only during her afternoon classes. “I had many issues with connectivity during Google Meets when I used the GridView extension the first day of school,” Koher explained.

“I was kicked out so many times I nearly panicked,” Koher continued. “When I uninstalled the GridView extension for the second day, I noticed a significant improvement. Google Meets seems to work perfectly during the first block of the day, but I still get kicked out once or twice in my afternoon classes. I thought it was ironic that a Google extension subjected Google Meets to crash while I am using a school-issued Chromebook.”

Meanwhile, OH culinary arts teacher Chef Eric Schlossberg voiced his frustrations for both live class meetings and preparations even before online school re-started. “Prior to beginning the virtual school year, we were all pretty stressed at figuring out how we would function. Fortunately, we were trained to use wonderful extensions to the Google site, Scholssberg told The Torch.

“Unfortunately, they just don’t work,”Scholssberg went on to explain. “Whereas extensions such as Nearpod have become a saving grace, other extensions such as Google Meet Attendance, Google +, and Google Hangouts just don’t function at all. I was greatly depending on these programs to facilitate such tasks as taking attendance and breaking students into small groups to get collaborative work done. I’ve had to immediately change my teaching tactics and spend a couple of days crazy stressed out trying to get these features to work, only to find out that they just don’t function.”

Students have also found creative ways to stay connected during virtual distance learning. I had the most unusual thing happen during online teaching. One of my students was explaining to me why he was unable to be seen while he was in class,” OH art teacher Ms. Jane Tobal shared. “He explained that he had loaned his computer to his grandfather because his grandfather was selling things on eBay, so he had to join our class by logging in through his smart refrigerator. The refrigerator had no camera. Every once in a while he would say, ‘Oh, excuse me, I may drop off for a second, my mom needs to get into the refrigerator because she’s making lunch!’”

This is just scratching the surface. On September 3, a 16-year-old student in Miami-Dade County, the fourth-largest school district in America, was arrested for a massive county-wide cyberattack that caused major internet traffic and technical difficulties for students. Barrett Lyon, CEO of a cybersecurity firm called Netography, compared these cyberattacks to a restaurant. Lyon told the Miami Herald, “It’s like if you own a restaurant and 1,000 people show up without reservations and don’t order food. Your real customers are going to arrive, and suddenly, you have to sort out a huge mess.”

As students try to maintain faith that school will one day be back to normal, problems with the alternative are not doing much to keep students’ and the staff’s morale high through this challenging time. In a year unlike any we’ve ever seen before, filled with little-to-no good news, a morale boost and sense of normalcy would be a welcome sight right now.