EDITORIAL: School district’s mismanaged reopening of campuses began with a lack of foresight 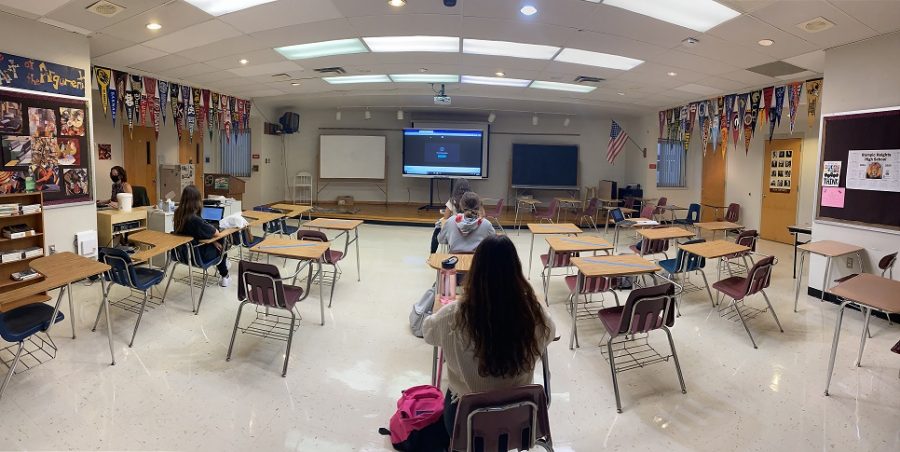 The in-person attendance of Ms. Gina Woods' first period Advanced Placement English Literature and Composition class is indicative of the class sizes across Olympic Heights. The school is averaging less than 500 students on campus per day out of its total population of approximately 2,300 students.

On Sept. 21, the School District of Palm Beach County began welcoming back students to in-person instruction after starting the 2020-21 school year with three weeks of virtual learning only. The return to campuses is not mandatory for students, as parents have the option to either send their children back to campus or to remain in the virtual learning mode. By now, it is no secret that the district was not prepared for a Sept. 21 reopening, and the effects of that rushed reopening still linger.

The school district’s hand was forced by Gov, Ron DeSantis and the Florida Department of Education (DOE) because the plan the district submitted to the state during the summer for its return to in-person instruction tied the return date to the date Palm Beach County transitioned into Phase 2 of its COVID-19 reopening.

By all accounts and their own admission, the district and the school board were caught off guard when the county commission decided to move into Phase 2 on Sept. 8. The Sept. 8 county’s transition into Phase 2 meant that the school district had to reopen its campuses to those students wishing to return by Sept. 15. Palm Beach County mayor Dave Kerner was able to convince DeSantis to give the unprepared school district an extra week to reopen its campuses.

While that extra week was helpful, it was still not enough time for schools to be totally prepared for students to return. A myriad of problems – ranging from poor communication with parents and staff to lacking the necessary personal protective equipment (PPE) to a totally botched attempt to ensure teachers with a high risk of catching the coronavirus would be able to continue to teach remotely – plagued the reopening and have yet to be totally resolved.

Someone at the school district or on the school board should have realized that the county was going to want to reopen as soon as possible due to its objective of regenerating the economy by opening more businesses and getting people back to work, even before it may have been completely safe to do so. During the entirety of the pandemic, our so-called “leaders” at the federal, state, and local levels have prioritized the well-being of the economy over the well-being of the population.

The school district and school board should have realized the county would be in a rush to transition into Phase 2, and it doesn’t take a genius to see the flaws of prematurely opening up a county, let alone an entire school district. Although decreasing, the cases of coronavirus in Palm Beach County aren’t at a safe level as of yet. Masks are still required in public, and the public’s overall mood is still, at best, skeptical at the prospect of venturing into crowded buildings.

While we at The Torch understand that a major part of opening schools around the same time as the county transitioned into Phase 2 is that for many parents to be able to get back to work they need for schools to be open so their children aren’t at home alone during the day. Setting aside the flaws associated with the view that a main function of school systems is to serve as the nation’s babysitter, opening schools before it is safe to do so as a means to make it easier for parents to go to work is a clear act of prioritizing the health of the economy over the health of the population.

The plan to link the schools’ reopening to the county’s transition into Phase 2 was an incredible lack of foresight on the part of the school district and school board. The finger pointing that went on after the school’s reopenings were triggered by the county’s transition into Phase 2 also demonstrated a lack of leadership. The Torch would have preferred the school district and school board formulate an appeal to the DOE to delay its schools’ reopenings until the positivity rate was at an acceptably safe level rather than be rushed into a poorly organized and mismanaged return to brick and mortar by an authoritarian state leadership with little regard for the safety of its citizenry.