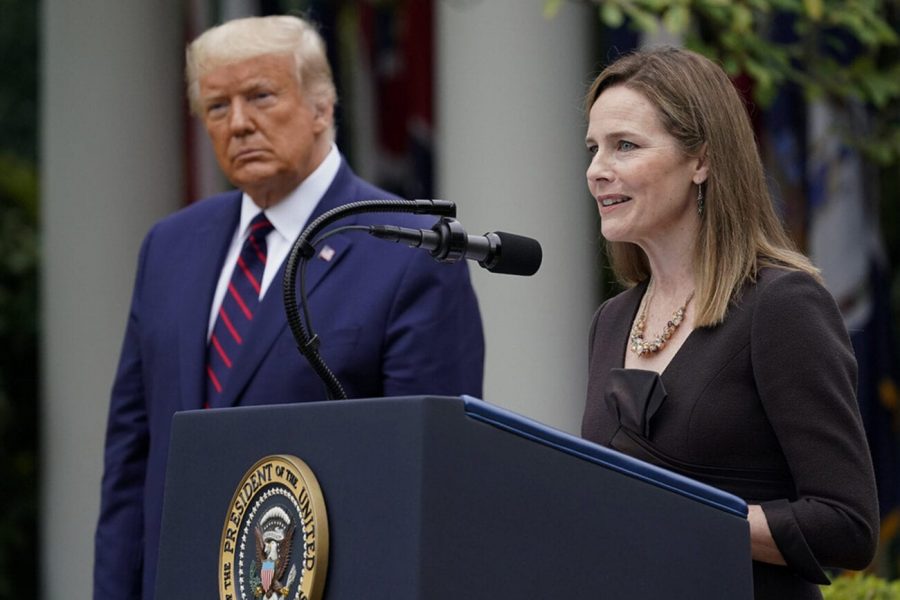 Supreme Court Justice Ruth Bader Ginsburg passed away on Sept. 18, leaving open a seat on the court that President Donald Trump has moved quickly to fill with the nomination of Amy Coney Barrett, a very conservative jurist who is now going through her Senate confirmation hearing. Barrett is practically a polar opposite of Ginsburg, who provided the court with a liberal voice that helped many court cases provide rights to women and the LGBTQ+ community.

Trump’s announcement on his intention to immediately fill the seat came just hours after Ginsburg’s death, distracting from her legacy as an icon and turning her death into a political crusade regarding who will fill the empty seat on the supreme court. Trump’s hastiness to fill Ginsburg’s seat is not only disrespectful to Ginsburg but hypocritical as well.

The hypocrisy comes in regards to then President Barack Obama’s nomination of Merrick Garland to the Supreme Court upon the death of Justice Antonin Scalia in February of 2016. Senate Majority Leader Mitch McConnell (R-KY), arguing that Obama was in the last year of his second term should not be allowed to fill the seat, refused to hold confirmation hearings for Garland. McConnell argued that the American electorate should have a say in who replaces Scalia and the seat should be filled by the winner of the eight-months away 2016 presidential election between Trump and Democratic nominee Hillary Clinton. As a result, Scalia’s seat remained empty for 14 months until it was filled by Trump nominee Neil Gorsuch, who was nominated on Jan. 31, 2017, and assumed the seat on April 10 of that year.

Now, just a bit over four years later, Ginsburg has passed away just six weeks before the 2020 presidential election – one that even the most conservative of polls has Trump losing badly – and the GOP, led again by McConnell, is rushing to fill the empty seat with a Trump nominee. Never has a Senate majority leader acted with more brazen hypocrisy than McConnell has in this matter. And practically the entire Republican Party is in lockstep behind McConnell.

Consider the words of Sen. Lindsay Graham (R-SC) who was instrumental in McConnell’s move to keep Gorsuch from receiving a hearing: “I want you to use my words against me. If there’s a Republican president in 2016 and a vacancy occurs in the last year of the first term, you can say Lindsey Graham said let’s let the next president, whoever it might be, make that nomination.” Yet, here we are four years later, and Graham has completely flipped his opinion in favor of Trump choosing a nominee even though he is not guaranteed another four years in office.

McConnell’s game plan all along has been to pack the Supreme Court and the lower federal courts with conservative judges, eschewing all sense of decency and ignoring the questionable qualifications of those judges. And he has been enormously successful at it. Barrett’s inevitable approval by the GOP-led Senate will give the conservatives a 6-3 advantage on the Court.

Trump, on the other hand,  has an obsession with exerting his power over the United States government, and that is the primary reason he feels the need to fill the position as quickly as possible. Trump says that it is his responsibility, but in his four years of presidency, he has turned away from every major responsibility.

What does the 6-3 conservative majority on the Court mean? One of the biggest concerns is the Court’s upcoming Nov. 10 hearing of the Trump administration’s case to eliminate the Affordable Care Act (ACA). If the Court rules in the Trump administration’s favor, up to 20 million Americans will lose their health care insurance, inevitably leading to a major health crisis in the country. Additionally, despite Trump’s claims to the contrary, the elimination of ACA will allow commercial health insurance carriers the ability to deny coverage to customers with pre-existing conditions, making it more costly – or impossible – for those people to get coverage.

If this sounds hyperbolic, consider this: the GOP has been fighting to do away with the ACA since its establishment in 2010. And they fought it every step of the way in the years prior to it finally becoming law. In those 10-plus years, the GOP has failed to put forth a single viable replacement option for the ACA to make sure that all Americans have access to healthcare.

Besides healthcare, Roe v. Wade, the 1973 Supreme Court case that legalized abortion and gave women some semblence of control of their bodies, is now square in the crosshairs of the conservatives. Also, many Americans are at a danger of losing rights they have fought long and hard to secure. The LGBT+ community’s short-lived success of having legalized gay marriage and working rights are now in considerable peril.

And Amy Coney Barrett is a certain yes vote on the elimination of the ACA, Roe v. Wade, LGBT+ rights, and the Voting Rights Act.

The balance of democracy, unfortunately, rests in the hands of Trump and the Republican party, and as this country becomes more polarized, the dangers of them filling Ginsburg’s seat with their conservative darling Barrett could mean a complete reversal of true American freedom that has been earned by every minority group in the country. If the country continues to move in this direction, the work of justices such as Ruth Bader Ginsburg will be disparaged, and the country will have failed.