Lions football off to 1-1 start in pandemic shortened season 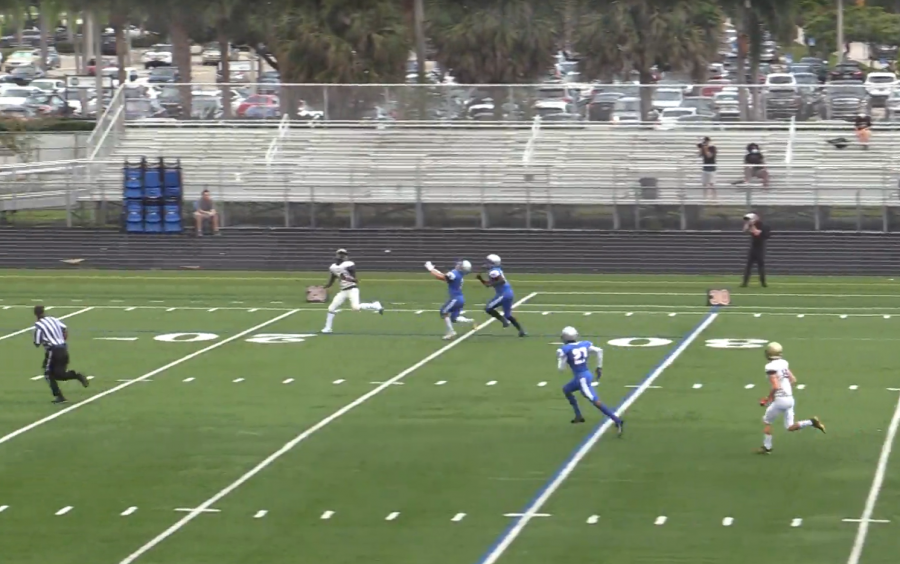 Lions wide receiver K'Ameronn Joseph (in white at the 22-yard line) gets ready to haul in a pass from quarterback Karvon Wright for a 48-yard gain in the Lions' opening drive against Spanish River on Oct. 31.

An Olympic Heights defense that dominated Spanish River on Saturday, Oct. 31 in the season opener of the pandemic-shortened 2020 high school football season was no match for Boca Raton High on Friday, Nov. 6, as the Bobcats steamrolled the Lions 42-2.

Coming off of the season-opening 21-7 win over Spanish River, Lions Head Coach Kevin Wald was feeling pretty good about his team. “I thought the defense played outstanding for the first game,” Wald told The Torch. “The score Spanish River got was a gift off a punt return blunder that should’ve never happened. The defense forced three turnovers, as well. The special teams were outstanding, as well, besides the one punt return turnover.”

The win over Spanish River featured the Lions coming back from a 0-7 deficit behind two touchdown passes from quarterback Karvon Wright to wide receiver K’Ameronn Joseph. The first was an 85-yard bomb to tie the score, and the second was a 29-yard completion to seal the win late in the fourth quarter.

Wright and Joseph also hooked up on a 48-yard completion in the Lions’ opening drive of the game which ended with a blocked field goal attempt.  Joseph ended up with four catches for 163 yards and the two touchdowns on the day.

The OH defense shut down the Spanish River offense for the majority of the game with the Sharks’ only score coming on a short drive after being set up by an OH fumbled punt catch at its own 15-yard line.

The Lions defense also got in on the scoring when defensive end Parker Poloskey recovered a Spanish River snap from their own 18-yard line that went over the quarterback’s head into the end zone to give the Lions a 14-7 lead early in the third quarter.

The Lions defense was also aided by interceptions by safety Jean Alfonso and linebacker Michael Stango. Alfonso added 12 tackles and one pass deflection in the Lions win over Spanish River.

However, it was a totally different game when the Lions faced off against Boca Raton. The Bobcats scored touchdowns on their first three possessions of the game to take an early 21-0 lead. Because the Lions offense was unable to move the ball for the majority of the game, the Bobcats were aided by good field position with three of their six touchdowns on the night coming off of drives of 35 yards or less with two of those three drives taking only four plays to complete and the other only five plays.

The other three Bobcat touchdowns came on drives of five plays for 62 yards, seven plays for 98 yards, and six plays for 70 yards.

OH’s only score came on the last play of the game when OH linebacker Bill Charles sacked the Bobcats’ quarterback in the end zone for a safety.

The Lions will next take on the rival West Boca Bulls on Saturday, Nov 14. The game will be played at Boca Raton High School with kickoff scheduled for 6:00 P.M.