Despite the crazy COVID-19 NCAA football season, it’s a familiar cast of characters sitting atop the rankings 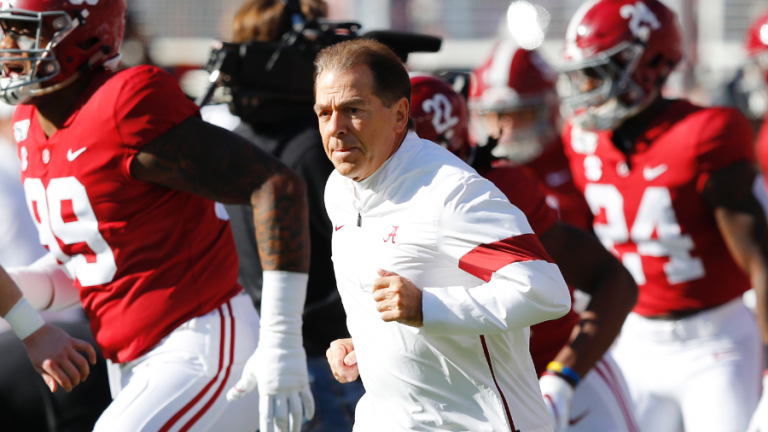 The Alabama Crimson Tide, led by head coach Nick Saban (center), have been an unstoppable force this NCAA season and are favored to win their fifth national championship in the past ten years.

As the NCAA football nears the end of its regular season schedule, fans are getting ready for bowl games and the playoffs. It has been a very different season than normal for college football, but it has turned out to be a very exciting season. From College Gameday every Saturday morning, all the way to the Saturday night games, there have been many action-packed Saturdays for college football fans.

The current College Football Playoff Rankings (CFPR) has some obvious teams at the top, but also some very surprising ones. Sitting at number one is the 9-0 Alabama Crimson Tide. Led by Heisman Trophy contender quarterback Mac Jones and behind the genius of head coach Nick Saban, the Tide has not been seriously challenged in any game this season so far. They have clinched the SEC West title and are favored to win it all.

It looks like Notre Dame making the decision to play this season in the ACC was a great idea, as the Fighting Irish are currently ranked second in the nation after taking out ACC foe Clemson in double overtime on Nov. 7. Notre Dame is a strong contender for the national championship behind the play of their outstanding quarterback Ian Book, but they will have to beat Clemson again in the ACC Championship Game on Dec. 19.

In all fairness to Clemson, now sitting at number three in the CFPR, their loss to Notre Dame came without having their potential Heisman Trophy winning quarterback Trevor Lawrence available for the game due to his testing positive for COVID-19 on October 28. Would Clemson have won if Lawrence was behind center for the Tigers against Notre Dame? Nobody will ever know the answer, but we might get an idea from the ACC Championship Game when the Tigers and the Irish face-off for what may turn out to essentially be a pre-playoff playoff game.

Currently, sitting in the tenuous number four spot are the Ohio State Buckeyes. With the flashy quarterback Justin Fields, an outstanding wide receiver core, and a great coaching staff, this could be the Buckeyes’ year wherein they win their first championship since 2014, the first year of the College Football Playoff System.

The big question surrounding the Buckeyes is if they even deserve a spot in the playoffs. Despite being undefeated, they have only played five games to date, and those have been against some questionable competition. The Big Ten just recently eliminated their six-game minimum to qualify for its championship game to be played on Dec. 19. There are those that believe the elimination of this minimum was done just to keep Ohio State in national championship contention since the Buckeyes sixth and final game of the season, scheduled for this Saturday against Michigan, has been cancelled due to COVID-19 concerns with the Michigan team.

At number five is Texas A&M, who is now at 7-1 on the season. The Aggies sole loss was a 52-24 drubbing by SEC West opponent Alabama. Texas A&M rebounded from that loss by beating the Florida Gators in a very close 41-38 game.

As a result of that loss to Texas A&M, the Gators, despite having clinched the SEC East title last weekend, are sitting behind the Aggies at number six. Florida quarterback Kyle Trask has been the catalyst for the Gators this season and is a favorite to win this year’s Heisman Trophy. For Florida to have a shot to move into one of the four playoff spots, they will need to not only beat LSU this weekend, but also beat Alabama in the Dec. 19 SEC Championship Game. Beating LSU shouldn’t be a problem, but the Gators’ defense will have its hands full with the high-powered Alabama offense.

Rounding out the CFPR top ten are Iowa State, Cincinnati, Georgia, and the University of Miami. It would take some strange happenings over the next two weeks for any of  those teams to snake into a top four spot and make the playoffs, but crazy things tend to happen in the closing weeks of the NCAA football season.

Looking ahead, we project the playoff teams and the other major bowl games that makeup the New Year’s Six Bowls. In the first of those matchups, we see Georgia and Cincinnati in the Chick-fil-A Peach Bowl. In the Capital One Orange Bowl, we project a Miami vs. Indiana matchup. We see Coastal Carolina vs. USC in the Playstation Fiesta Bowl and Iowa State and Florida in the Goodyear Cotton Bowl Classic.

In the first of the playoff games at the Rose Bowl, we project the Ohio State Buckeyes vs. the Notre Dame Fighting Irish. In the second playoff game at the Sugar Bowl, Alabama will take on the Clemson Tigers. After the semi-finals, we project a National Championship Game at Hard Rock Stadium in Miami between Alabama and Ohio State, with the Crimson Tide winning their fifth national championship in the past ten years.