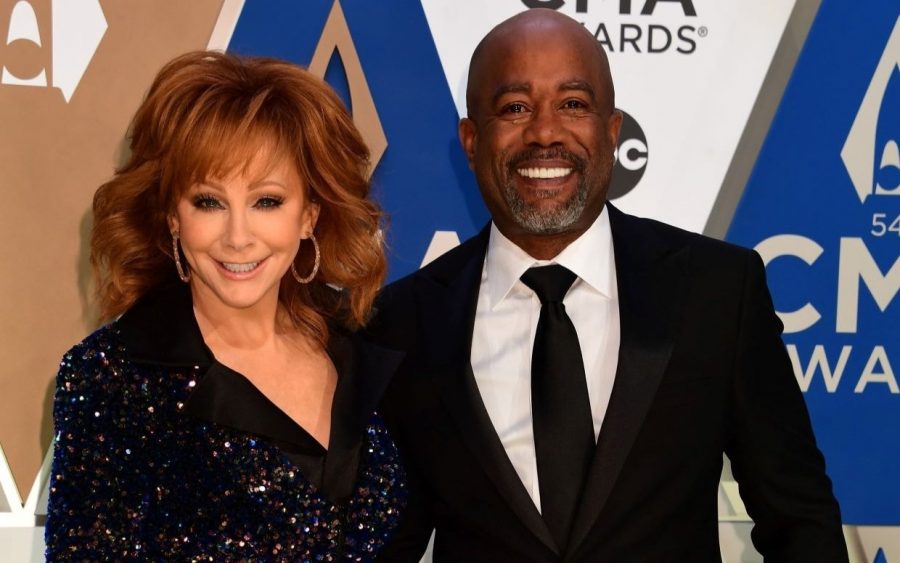 The 54th Country Music Awards (CMA) held last month came with some glitz and glamor, but also a bit of controversy. Held at Nashville’s Music City Center, the audience was small due to limitations imposed by COVID-19 social distancing measures, but it wasn’t any less star-studded.

The show was hosted by country music legend Reba McEntire and Darius Rucker, formerly the lead singer of Hootie and the Blowfish. McEntire, who has won six CMA and has been nominated for many, many more, and Darius Rucker, who has won one and been nominated for four others. Together they made a truly dynamic hosting duo. Those in attendance attendees included Maren Morris, Luke Combs, and Eric Church.

The night started off with an opening performance by Jason Aldean, Dierks Bentley, Brothers Osborne, and Ashley McBryde. Their performance was a tribute to the late Charlie Daniels, who died of a stroke, on July 6, at the age of 83. In addition to Daniels, the show also honored country music megastars Joe Diffie and Kenny Rogers, both of whom passed away in March of this year.

The group Little Big Town paid tribute to Kenny Rogers, who passed in March by singing “Sweet Music Man.” John Pardi paid tribute to Joe Diffie by singing “Pickup Man,” one of Diffie’s biggest hits. It has been a rough year for country music, but the CMAs certainly brought back some fond memories and made some new ones.

However, the Country Music Association received some complaints and backlash about the absence of tributes for other legendary country artists that passed this year. Artists such as John Prine, Billy Joe Shaver, and Jerry Jeff Walker. Prine died at age 73 in April as a result of COVID-19. Walker and Shaver both died in October at the ages of 78 and 81 respectively.

Singer-songwriter couple Jason Isbell and Amanda Shires were so outraged at the Prine snub that they quit the Country Music Association, returning their lifetime membership club. Also angered by the Prine snub, singer-songwriter Sturgill Simpson tweeted a video clip of himself saying, “Two seconds. That’s all it would’ve took. Two seconds. Literally, two syllables: John. Prine. That’s it… nope.” Then he pointed over his shoulder at Rucker’s performance of “Beers and Sunshine” on the broadcast of the awards show on his television and added, “All the time in the world for this s–t.”

Despite the controversy, the show had several high points, including in-person performances by Combs, Church, and Morgan Wallen. Streaming from The Hollywood Bowl in Los Angeles, Dan and Shay performed their hit “10,000 Hours” with help from Justin Beiber. Their performance was absolutely captivating and melodic. Keith Urban also streamed in from Australia to sing his hit “When God Whispered Your Name,” which he dedicated to frontline workers and their families.

Charlie Pride, country music’s first black superstar, also made an appearance with up-and-coming star Jimmie Allen to perform one of his biggest hits “Kiss an Angel Good Morning.” In his CMA Lifetime Achievement Award acceptance speech, Pride spoke briefly about what it was like to reach as many people as he did through music. Sadly, Pride passed away on Dec. 12, just one month after receiving his Lifetime Achievement Award.

The CMA Entertainer of the Year Award went to Church. When the award was announced, Combs, a nominee for the same award, jumped out of his seat in celebration, cheering his friend on. In Church’s acceptance speech he stated, “ Politicians are about division, music is about unity.” He went on to say that music will continue to help unite the world and help shine light in dark places.

Carly Pearce and Lee Brice won Musical Event of the Year with their duet of  “I Hope Your Happy Now.” They had planned to perform the song together during the CMAs; however, Brice contracted COVID-19. Instead, Pearce took the stage with Lady A band member, Charles Kelly. They still absolutely destroyed the song and captivated the small, socially-distanced audience.

Overall, the CMAs were certainly the uplifting thing that country fans all around the world needed. In such dreary times, it was exciting to see members of the country community come together. It was also truly heart-warming to see the tributes to the superstars that passed, even if all of them were not acknowledged.