OPINION: Trump and his enablers must be held accountable for the insurrection they incited 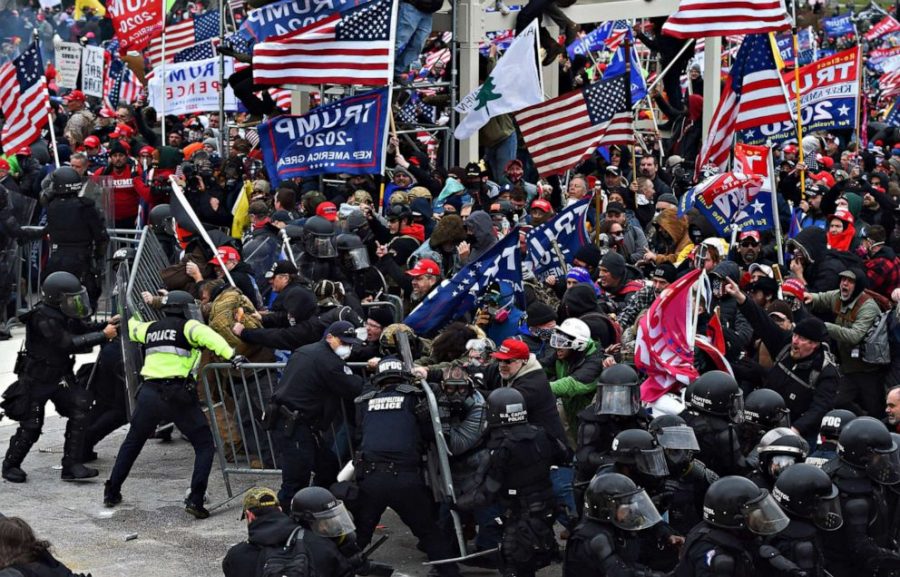 The date January 6, 2021, will go down as one of the most regrettable in American history. This is not because of foreign conflict or the beginnings of a new war, but the abhorrent behavior of soon-to-be former President Donald Trump and several thousands of his supporters. Trump knowingly incited a riot at the U.S. Capitol Building by encouraging his supporters to storm the building, and threaten members of Congress as they certified the results of the 2020 presidential election. And, he used his power to prevent law enforcement from taking control of the situation.

This attempted coup of the government was only carried out because of Trump’s refusal to accept the result of the election he lost to Democrat Joe Biden in November. Instead of accepting the loss, Trump has for the past two months repeatedly claimed that the election was stolen from him, and his cultish supporters foolishly believe him.

On the day of the riot as the electoral votes were being certified, Trump held a “Save America” rally near the White House. Previous to the rally Trump had tweeted, “Statistically impossible to have lost the 2020 Election. Big protest in D.C. on January 6th. Be there, will be wild!”

At the rally, he stirred up and incited the crowd by telling them, “We got to get rid of the weak Congresspeople, the ones that aren’t any good” and that they need to “fight like Hell, and if you don’t fight like Hell, you’re not going to have a country anymore.” The message was quite clear to his supporters that the certifying of the election had to be stopped.

Thousands of Trump supporters from the rally crowd then made the 2.3 mile trek to the Capitol Building to join several thousands other supporters already assembled there to do Trump’s dirty work. Once the siege of the Capitol began, it became clear that the Capitol Police Department was horribly unprepared to deal with the mob, which is strange considering they were well aware of the rally.

The Capitol Police Department has explained that they underestimated both the size and the violent nature of the mob. This despite being made aware of those very factors by the FBI which had been monitoring social media postings by Trump supporters leading up to Trump’s rally.

The Capitol Police Department is in charge of protecting one of the nation’s most significant buildings and the nation’s elected representatives who convene and work there. It’s failure on such a significant scale led to our national security being threatened.

Worse, numbers of the Capitol Police Department officers barely put up a fight against the mob with some even opening the doors to the Capitol Building for the insurrectionists. At least one of the officers even posed for a selfie with an insurrectionist.

When the violence truly got out of hand, our supposed Commander-In-Chief was relishing the assault on the Capitol Building as seen in video footage of he and his family doing so as they watched the events unfold on television back at the rally site near the White House. Furthermore, Trump rejected six requests to authorize the deployment of the National Guard to aid the Capitol and Washington D.C. police to stop the violence. It was not until Vice-President Mike Pence took charge and called the guard several hours later that they were deployed.

The true irony in this despicable breach of security is that when peaceful protests for Black Lives Matter (BLM) took place over the summer, Trump deployed military troops into cities where protests were most prevalent. During the D.C. BLM protests, the city was awash with the National Guard in full force, in riot gear, armed to the teeth.

During the summer social justice protests, Trump even tweeted, “when the looting starts, the shooting starts,” because he was such a “supporter” of strict law and order. Yet, when Trump supporters come storming in, there is barely a can of pepper spray to hold back upwards of 50,000 people. No one has to ask why.

Truthfully, Trump, as delusional, dishonest, and childish as he might be, did not work alone to start this riot. He has been aided and abetted by other members of his party. Senators Ted Cruz of Texas and Josh Hawley of Missouri and GOP House Minority Leader Kevin McCarthy of California, have been Trump’s point men in Congress in the attempt to overturn the election results based on groundless claims of massive voter fraud and election rigging.

And the rest of the GOP Congresspersons that have not spoken out against Trump’s baseless claims, and that is practically all of them, are just as culpable in the events of January 6. Current Senate Majority Leader Mitch McConnell, who has been doing Trump’s bidding for the past four years, practically merging the Executive Branch and the Senate side of the Legislative Branch, added fuel to the fire by neglecting to recognize President-Elect Joe Biden’s win until it was too late.

McConnell making a moving speech about the sanctity of certifying the election to protect democracy meant nothing when the mob of angry supporters was already making their way to the Capitol. Even after the act of terrorism that Trump encouraged, 147 Congressional Republicans objected to the certification of the electoral votes. They all have blood on their hands.

As this column is being posted, the House is meeting to debate and vote on Trump’s second inevitable impeachment in a 13-month period. While his first impeachment was carried out with little to no Republican sort, today’s vote is expected to have bipartisan support. There are even a handful of Republican senators who are suggesting that they will vote to convict Trump for his incitement of last week’s attempt to overthrow the nation’s democracy once the House impeachment reaches the Senate for a vote.

Any Congressperson that truly holds our democratic principles dear and is finally willing to put country over party should be voting for Trump’s impeachment and conviction.