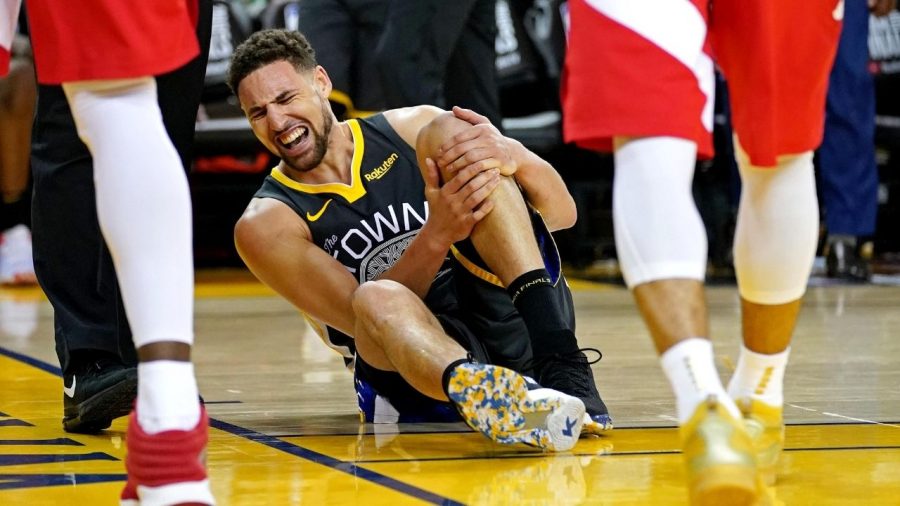 Golden State Warrior Klay Thompson suffered a torn achilles before the 2020-21 season even started, leading some to speculate that he was rushed back too soon from a torn ACL injury.

With 2020 in the rear view mirror, many would agree that it was an unusual and trying year. Back in March 2020, COVID-19 became a reality in our lives, affecting everyone in one way or another. Whether it was having to find a new job or having to give up a favorite pastime, we all had to change our way of living.

And it wasn’t much different for athletes. After an unexpected stoppage to all sports due to COVID-19 around mid-March, many athletes had to discover a new hobby for quarantine. Soccer player Alphonso Davies of Bayern Munich and football player Juju Smith-Schuster of the Pittsburgh Steelers are two examples of athletes who started a career in Tik-Tok to help them pass time throughout the lockdown. Basketball stars such as Lebron James from the Los Angeles Lakers and Giannis Antetokounmpo from the Milwaukee Bucks admitted to having enjoyed the time off with their family.

As fun as quarantine may have sounded for some of these athletes, after about a five-month break, major sports leagues were set to resume their seasons. The National Basketball Association (NBA) came back on July 30 to finish off its season and begin the playoffs. Major League Baseball (MLB) had its opening day on July 23 rather than the originally scheduled start date of March 26.

Soccer’s most well-known club tournament, the Champions League, returned August 7. Unlike other leagues, the National Football League (NFL) had its calendars set for a September 10 kick-off date, and it was able to stick to that date, albeit with a minor twist. Dissimilar to previous seasons, the NFL had shortened training camps and did not have a pre-season, and players not wanting to be put at risk of contracting the virus had the option of sitting out the season.

All leagues around the world have had very diverse seasons. The NFL not having a pre-season might not sound like much, but this had a major effect on the regular season. Due to the extremely shortened pre-season training camps, injuries were at an all-time high in the NFL this season. In a study conducted by Dr. Lyle Cain, an orthopaedic surgeon and sports medicine specialist, sports injuries are more likely to happen early in the season. With the shortened training camps and no pre-season games, players knew they were at risk going into these early season games.

Soft-tissue muscles, such as the achilles, are at a high-risk whenever going into a game with little preparation, and this season alone we have seen over 15 players suffer a torn achilles. This number is much higher than the previous years, which left people wondering if a proper off-season could’ve prevented some of these injuries.

Similar to the NFL, the NBA didn’t have much time to get ready for the 2020-21 season. The previous NBA season wrapped up when the Los Angeles Lakers defeated the Miami Heat in six games on October 11. Just 72 days later, the shortest off-season in major American sports history, teams were back on the court for action. This short period of time between seasons limits players from having the necessary time off to rest and recuperate their bodies as they have to maintain top physical shape in order to best avoid severe injuries when returning to action.

NBA health officials have made it clear that players would have to develop a fitter base of conditioning and strength to last the 72-game season, especially to prevent soft-tissue injuries that unconditioned players tend to suffer. Coming off a short off-season, the act of “load-managing” will become much more popular affecting this NBA season in multiple ways.

Load-management is a strategy used by NBA teams and players to monitor the physiological stress a player experiences when doing any amount of activities. Load-management has been heavily popularized in recent years by Los Angeles Clippers star Kawhi Leonard, and we have been seeing way more stars sit-out games, affecting game outcomes this season. On December 28, a much inferior opponent in the Memphis Grizzlies flew out to Brooklyn to play against a star-studded Nets team. However, Brooklyn sat their two superstar players Kyrie Irving and Kevin Durant, and the Grizzlies were able to pull off the upset victory. Other stars resting up a few games this year have been the Los Angeles Lakers’ Anthony Davis and the Washington Wizards’ Russell Westbrook, as well as many others.

Although a great way to reduce injuries, load-management will not keep players injury free. The NBA has seen its share of star players go down this season. Three time NBA champion, Golden State Warriors star Klay Thompson went down with a torn achilles before the season even started. Thompson had been recovering from a torn ACL, which he suffered in the 2019 NBA finals, when he finally got the green light by the Warriors medical staff to go play basketball again. Due to the short off-season and games starting on Dec.. 22, the Warriors tried to get Thompson back in shape as quickly as they could so he could be ready for the season, but he ended up tearing his achilles in a practice game and will be out for the remainder of the year.

European soccer has also had a hard time preventing injuries amid this pandemic. The English Premier League is arguably the most competitive soccer league in the world, and fans were more than happy when English soccer came back at the end of August. Although good for the fans, this wasn’t such good news for the players as they knew they would have to make up for the five months worth of games they missed.

Reigning England champions Liverpool F.C. made their comeback to the fields August 11, and between then and December 30, they have played an insane total of 28 games. This calculates to an average of 4.6 days between each game. As a result, Liverpool had 12 different injuries to 9 different players.

Former Liverpool, now FC Zenit defender, Dejan Lovren, took matters into his own hands when he went to Twitter to complain about the lack of care for the players health, “People wondering why there [are] so many injuries, it’s simple. Too many games, impossible to recover, when you know that this year is a weird one (Covid). No proper time off, (personally I had only 8 days off) no proper pre-season and [then] the crazy schedule!!”

The hope of any true sports fan is that teams can begin to better take care of their players, so that this year can be filled with just as much excitement in sports as last year, if not more.