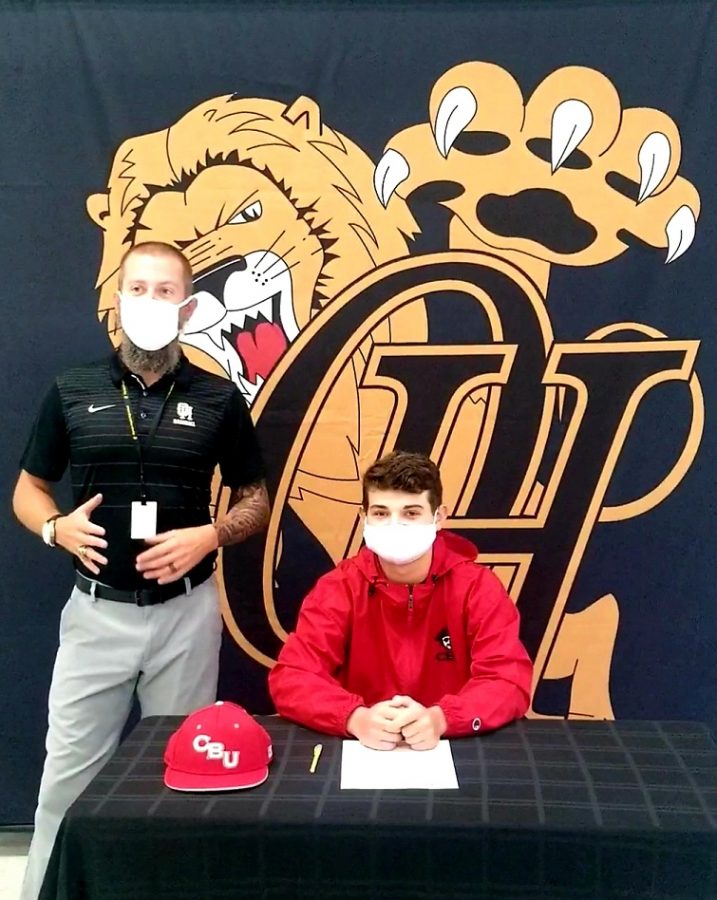 At Olympic Heights, we have many talented athletes who quietly go about their business of being a student/athlete while having a bright future ahead of them. These athletes have all worked very hard to get closer to reaching their dreams, and stories like this really influence others that are looking to do the same.

Senior Jake Neese of the OH baseball team is one such student/athlete. Jake, the Lions’ first baseman and sometimes pitcher, has been one of the most impactful players on the team. “I can say that he is one of the hardest working kids I have ever coached,” head baseball coach Casey Beck comments. “He is the type of kid you root for, the kind of kid you want to be associated with for life. I could not be prouder of this young man.”

Coach Beck is a great role model for his young athletes, and pushes them so that they know that the hard work will pay off. And, the hard work has paid off for Jake, as he accepted a scholarship to play baseball at Christian Brothers University (CBU), a Division II school in Memphis, Tenn.

Jake has helped represent what a true athlete can be at OH and has shown others that they also can pursue their dreams if they work hard for it. Jake started his OH baseball career on the JV team his freshman year and has played on the varsity team his sophomore and senior years. Neese hits around .300 and is a power hitter.

Jake, who holds a career batting average hovering around .300 but considers himself a power hitter,  took the offer to play at Chritian Brothers University (CBU) over four other offers from Florida schools. One major factor that played into Jake’s decision was that CBU is not close too home, allowing him to pursue his baseball career, while at the same time being out in the real world on his own and “learning what it’s like to be an adult.”

Another factor that influenced Jake’s choice is that the CBU team will be graduating two first basemen in 2021, opening up a possibility for more playing time, if not a starting role, in his freshman year. Also, both Jake and his parents were very impressed with CBU headcoach Lee Parks, now in his fifth year at the helm of the CBU team.

“My parents feel comfortable about sending me to CBU,” Jake comments, “and I am very excited and thankful for the opportunity.”

Jake has had plenty of success so far in his baseball career, and the OH family wishes him much more as he moves to the next level of play and the next chapter of his life.