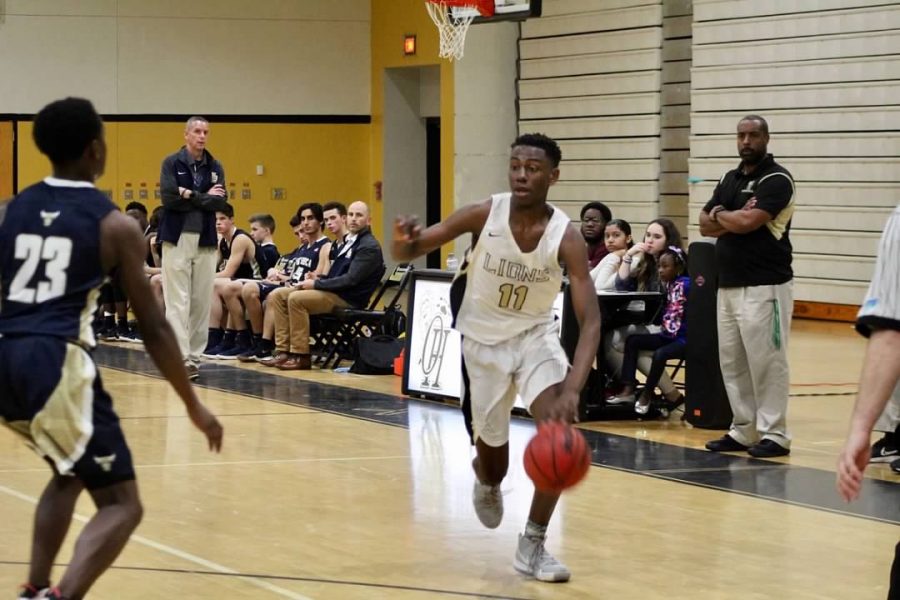 With a 66-58 loss to Dillard in the first round of the regional tournament, the Olympic Heights boys varsity basketball team’s best season in recent school history has come to a close.

Going into the season there was plenty of excitement surrounding the Olympic Heights Boys Varsity Basketball team. Last year’s record of 7-18 was not an indicator of the talent on the team going into the 2020-21 season.

The return of senior forward Micah Octave took the Lions to the next level with his elite on ball defense and offensive versatility. Octave led the Lions in total points, rebounds, steals, and blocks. Another impact player was senior guard Marc Steig, who was a second year starter for OH and played really well inside his point guard role. Steig led the team in assists per game with five and was the best volume shooter from three point range at 38 percent. As a team, the Lions took pride in their defense, averaging 15.2 steals per game and having held all but three teams to under 70 points.

The 2020-21 season, which saw the Lions go undefeated throughout the regular season, started with an 83-66 win over Park Vista at home. It was clear from the jump that the Cobras couldn’t run with OH. Octave led the Lions in scoring with 27 points and added 10 rebounds in the 17 point win.

The OH squad won their next three games by a total of 126 points, before getting tested by a solid Suncoast team. After being tied at 64 at the end of regulation, the Lions  put the game away in overtime with a 78-70 win. Steig posted 28 points in the win.

The Lions won their next four games with relative ease before taking on two formidable foes in the final two games of the regular season. In the Feb. 3 matchup with Royal Palm Beach, OH led by 18 at the end of the third quarter, but Royal Palm fought back in the fourth quarter. The Lions, however, were able to hold off the Royal Palm onslaught and ended up with a 79-70 win. Octave had 28 points and 12 rebounds and Caleb Mackrey added 19 points in the win.

OH faced off against Forest Hill on Feb. 5 in their regular season finale. Right away, OH showed they were the better team, posting a 17 point lead after the first quarter and never lost the lead. Octave, Steig, and Nick Peart each had over 20 points in the contest, and Steig added nine assists, leading the Lions to a 90-74 victory and an undefeated regular season with a 11-0 record in the pandemic-shortened season.

Taking that undefeated record and a boatload of confidence into the district tournament, the Lions easily dispatched Seminole Ridge in the first round of district tournament play with a 62-27 blowout win. Octave’s 26 points and four steals led the Lions in the victory.

Next, OH traveled to Martin County to face South Fork in the district tournament semi-finals. South Fork gave the Lions all they could handle through the first half, posting a 16 point halftime The Lions stormed back in the second half behind Octave’s 13 points and 14 rebounds to win the game 53-49 and a date with Martin County High School in the district championship game.

However, the Lions were off their game and fell flat in their first loss of the season in 62-39 loss, giving Martin Country the district title. As the district tournament runner-up, the Lions earned a regional tournament bid, having to travel to Fort Lauderdale to take on a tough Dillard squad.

Even though the Lions played much better in the regional tournament opening round game, Dillard proved to be too much for the OH squad. Behind Steig’s 18 points, the Lions came just short by a score of 66-58, bringing a most successful season to a close.

Despite the abrupt and disappointing end to the season, Head Coach Keith Mackrey has nothing but high praise for his team. “I am so proud of this group,” Mackrey told The Torch. “The majority of these guys were here when I took over three years ago. They were young and ready to be coached. They made it through the growing pains and the process of learning a new system. They reaped the benefits and had probably one of the best seasons that the school has ever had! I can’t say enough on how much I appreciate their dedication and hard work.”