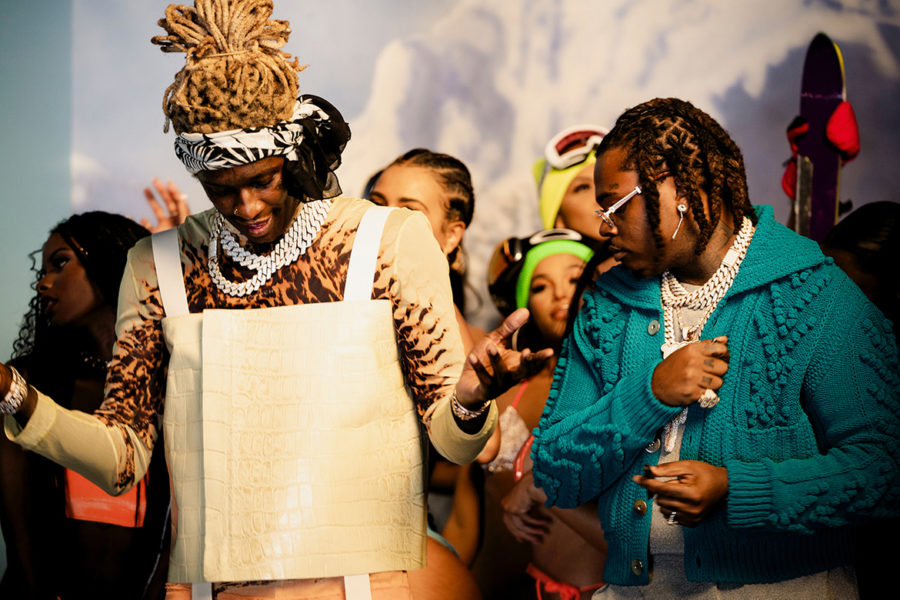 Slime Language 2, the recent Young Thug (left) and Gunna (right) release, is a must listen for rap fans.

After several months of anticipation, Young Thug and Gunna have released the follow-up to their 2018 compilation Slime Language with Slime Language 2 on the Young Stoner Life (YSL) record label. Young Thug assembles the hip-hop Avengers for this project with features from various superstars, ranging from Drake to Coi Leray. Given that it’s been years since the label’s last release, expectations were through the roof this time around.

Three singles marked the way and set the tone for the official release. Back in December, “Take It to Trial” by Young Thug and Gunna featuring label mate Yak Gotti was dropped. All three artists did their thing over the Wheezy produced beat, and it was a great track, both at the time and currently.

“GFU” was the second single. This time it was led by Yak Gotti and Sheck Wes featuring Yung Kayo. This song simply couldn’t produce the same buzz that the first single created as the song was decent at best. It was an underwhelming release, compared to how the first track performed.

Young Thug and Meek Mill re-collaborated on “That Go!” YSL artist T-Shyne was the sole feature on the track. Once fans heard this, the hype was through the roof for the album. Meek Mill begins the song very strongly and is followed by a very catchy hook by T-Shyne. Young Thug’s verse concludes the track, and it was one of Thug’s best to say the least.

Finally, YSL and the rest of the team announced on social media the album would be dropping on April 16.

When the day finally arrived, fans could not have been less disappointed. The intro track, “Slatty,” features Yak Gotti and Lil Duke. Young Thug begins the track in proper fashion, repeating the lyrics “Slatty, Slatt, Slatt, Slatt, Slatt,” indicating that this, in fact, is his slime language. The album’s title serves its purpose quite well here. The hook overpowers the rest of the song, but it’s still a great introduction for what’s to come.

Weeks prior to its official release, a snippet of “Ski” was posted to social media, which created a dancing challenge all over TikTok. The official track is very catchy. Young Thug and Gunna go back and forth, and it’s highly expected that this song will be a chart topper over time as the dancing trend will drastically increase the song’s popularity.

Fans had to have been extremely excited to find out that Travis Scott was a feature on “Diamonds Dancing.” This is definitely the best song on the entire release. Thug raps an amazing hook, Gunna creates a bridge for Scott, and then the Houston legend absolutely takes off and floats over the rest of the beat. Once Gunna raps the hook to conclude the song, listeners will likely be left amazed at what they had just heard. If this song doesn’t peak in the top 10 of the Billboard Hot 100, it will be surprising.

Hours before midnight, Young Thug went live on Instagram and previewed Drake’s feature on “Solid.” For the most part, this track is underwhelming. It isn’t a bad song; however, if an artist gets a Drake feature, they need to deliver. The title of the song fits the performance as the song is solid – not amazing, not trash. Fans will likely consume this track, propelling it to the top of the charts, but it simply isn’t that great.

After being released from prison, the hype behind Rowdy Rebel has been tremendous. Young Thug had to bring him in the studio to create “Came and Saw,” a highly needed collaboration between the two. Rowdy delivers a strong feature, and Thug’s verse compliments it well. This is definitely one of the best songs on the album, and it’s definitely a preview of what Rowdy has to offer in future releases.

Producer Wheezy’s beat on “Paid the Fine” allows Lil Baby and YTB Trench to deliver wavy features. It’s one of the more relaxing songs on the album. To be honest, for a Young Thug, Lil Baby, and Gunna collaboration, it isn’t that special. Compared to past songs, such as “Oh Okay” and “My Jeans,” this track doesn’t exactly exceed expectations for such a trio.

Young Thug and Lil Uzi Vert prove to fans once again that they are one of the hottest duos in hip-hop on “Proud of You.” This was a very anticipated snippet of Lil Uzi’s for quite some time, and now that fans have the entire song, they can enjoy what will likely be a fan favorite. It’s difficult to deny the chemistry behind Uzi and Thug’s songs, and “Proud of You” is a clear example of the capabilities of two of hip-hop’s favorites.

The feature list on “Warrior” should have excited fans enough to tune in. The song is one of the few without either Young Thug or Gunna, and instead is led by YSL members Lil Keed and T-Shyne along with Big Sean. Lil Keed has an appealing hook where he raps the same word, “warrior,” but, in Lil Keed fashion, makes it super memorable. T-Shyne follows up with a decent verse, proving that he can hang with the big dogs on feature heavy records. Big Sean’s verse is definitely a show stealer: his flow aligns perfectly with the beat as he shouts out the Golden State Warriors trio, DMX, and The Notorious B.I.G. This is undoubtedly one of the most underrated tracks on the project.

NAV and Lil Duke collaborate for the first time on “Pots N Pans.” Lil Duke’s hook is very good to say the least, but NAV’s verse carries the track in a big way. NAV has been delivering fire verses for months now as he attempts to quiet the haters. As he continues to rap as such, those haters become regular listeners, as is made abundantly clear on this track. If fans enjoy NAV’s music to some extent, they will definitely enjoy this song.

Three seconds into “Superstar,” fans likely checked their device to make sure they were listening to the right song. Future doesn’t sound like his normal self at all. His tone is similar to his verse on “King’s Dead,” and that song absolutely blew up. This is a very catchy track if given the chance. Listeners will want to skip to the next song but should try giving it a full shot first. It’s honestly one of the best releases from the entire album.

After Lil Keed and Gunna’s “Fox 5” collaboration successl, “Came Out” was a very exciting listen for most. Although it could not match what their previous song was, this was a fire release where Lil Keed does most of the ground work and is complimented by a classic Gunna verse. It’s fair to imagine Young Thug in the studio smiling while listening to his two apprentices doing their thing per usual.

As for the rest of the tracks on Slime Language 2, they are pretty forgettable. Even though Kid Cudi, Yung Bleu, and YNW Melly are among the features on the remaining releases, they weren’t nearly as memorable as the others mentioned. For the most part, the album provides a popular platform for the less known YSL artists to get their name out there.

Overall, the second release of the series Slime Language is an awesome experience for most listeners. Young Thug and Gunna shine on all of the songs that they are on and get unneeded assistance from various stars from the industry. As of April 2021, Slime Language 2 is definitely one of the top releases of the year and will likely be in the discussion for the top albums of the entire year come December.