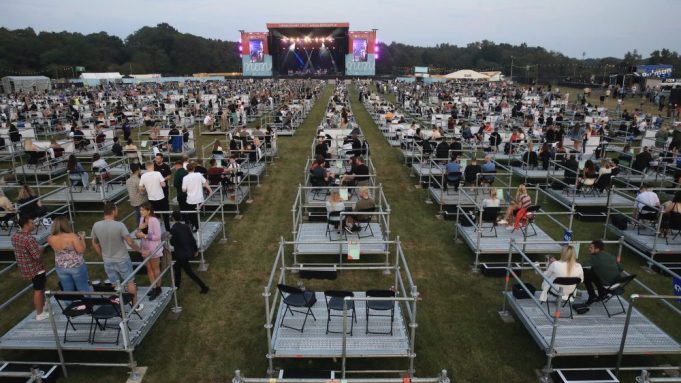 Pod seating at concerts is the latest step in a return to live-concert performances.

Like most industries during the pandemic, the music business was hit hard. Most concerts were cancelled and touring was brought to a stop. Most musicians’ lives revolve around the road and this changed drastically when quarantine hit.

One week there were an average of around 100 concerts a week being staged across the country; the next week there were none. This caused many artists to struggle. However, about a year into the pandemic and quarantine, the music industry found and is continuing to come up with new ways to safely perform their music for fans.

While it’s not the same, many artists, such as  Louis Tomlinson, Twenty One Pilots, and Adam Lambert have performed online concerts as a substitute for the real thing. Some artists have done complete concerts and just live-streamed it. Still others started to do Instagram Lives, performing two or three song shows and answering fan questions. Others started or added to YouTube channels. However, the online performances failed to even come close to the same experience as an actual live, in-person concert.

Then, taking a cue from the long-gone past popularity of drive-in movies, musicians and concert promoters began staging drive-in concerts. Drive- in concerts allow for artists to perform and make a living while keeping the audience safe. During a drive-in concert, the audience is  expected to stay in or near their cars and enjoy the music.

The performers are on a smaller stage, seemingly performing for hundreds of cars. Many artists have participated in this idea, including country legends such as Keith Urban and Garth Brooks. These drive in shows are specifically designed to accommodate social distancing. Many such venues allow for socially distanced tailgating spaces, negating the need for patrons to wear masks.

The drive-in concerts allow for more of the true concert feel as audience members can sing and dance along with live music, which is something a lot of people have missed out on over the past year. Drive-in concerts also allow audiences to somewhat feel the energy of the crowd and the performers, much like a normal concert before the pandemic.

More recently, as pandemic restrictions are being relaxed, more and more concerts are allowing for in-person attendance with pod-seating. Instead of purchasing individual tickets as in the past, concert goers can now purchase pod seating in groups of two, four, six, and sometimes eight with the pods being socially distanced.

Between the virtual concerts, the drive-in concerts and now the pod-seating concerts, the live music industry is slowly coming back to life. With vaccinations and the slowing spread of COVID-19, hopefully it won’t be too long before we are back to packed arenas and the concert going experience of the pre-pandemic days.