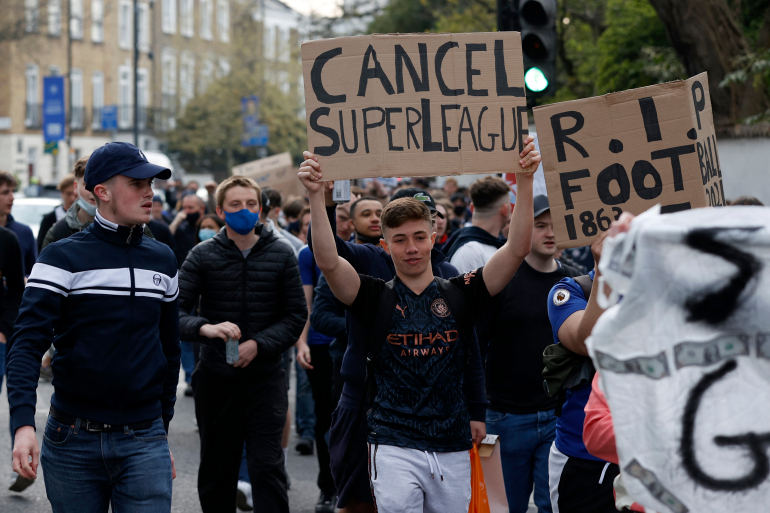 Fan outrage, such as this protest by Chelsea fans, caused nine of Super League teams to withdraw.

In mid-April news broke out that 12 of the biggest football teams in the world would be joining together to form what has been named the “European Super League.” This was a rumor that had been going on for years, but no one ever really believed it would happen. This time though it got closer than ever.

As soon as the ESL began releasing official statements, fans around the world became enraged with their respective clubs for partaking in such a league, destroying the foundations built by club owners hundreds of years ago. The announcement not only cast doubt on whether clubs would have been immediately kicked out of their current leagues and competitions, but also called into question the very future of the domestic leagues that have been football’s cornerstone for more than a century.

So what is the Super League? The concept of a super league has been around for decades, a huge league where only the most elite and rich teams in the world compete in order to make even more money through viewership. The most recent proposal for such a league was based around 12 teams that were truly the driving force behind getting this whole thing started.

The 12 teams are Real Madrid, Manchester United, Liverpool, Juventus, Barcelona and Atlético Madrid from Spain, Inter Milan and A.C. Milan from Italy, and the rest of the Premier League’s self-appointed Big Six: Manchester City, Chelsea, Tottenham and Arsenal. Other big name European teams such as Bayern Munich and Paris Saint Germain rejected the project up front, expressing no desire to join such a league that “threatened the basic fundamentals of the beautiful sport.”

The proposed Super League would have permanent members who face no risk of missing out on either the matches or the profits. The Super League would take away the ability for smaller clubs to earn their place in the competition which is the main reason many fans were upset by the most recent Super League proposal.

Teams that aren’t in the Super League would never be given to play in meaningful matches against the top teams from the Super League  thereby limiting the amount of money that can be earned from such matches through viewership and advertising revenue. There was even fear that the teams not in the Super League could face bankruptcy. “It’s not fair for these smaller teams because they will lose so much money that eventually they’ll be forced to just quit,” Olympic Heights senior Matheus Leoncini said.

Money is the main reason why the idea of a Super League was brought up, especially considering how much money football clubs lost during the pandemic. Each team in the Super League would earn around 400 Million Euros simply for joining the Super League and being committed to it. That number is astronomical compared to how much Bayern Munich earned for winning the Champions League last season.

That would be only the beginning though, clubs would make more than double the amount that they make now just on those broadcasting rights. While that sounds all good, it would mean every other team outside of the Super League would essentially have limited income which could eventually destroy the future of football and would not allow any new teams or new players to rise through the ranks and become world stars.

This is what so enraged fans, leading to widespread social media criticism and protests outside of club stadiums. Fans were so persistent in demanding that their clubs not join the Super League that in a matter of 72 hours, nine of the 12 clubs had pulled out of the deal and had issued apologies to their fans.

Manchester City were the first club to pull out of the Super League, followed by Chealsea, and then the rest. As of now, the only clubs still committed to the Super League are Barcelona, Juventus, and Real Madrid. As a three-team league is not a possibility, the European Super League proposal would appear to be all but dead.

“I’m glad that things have fallen through because this was well and truly going to make a lot of fans mad including myself if it had gone through.” OH student Pedro Moreira commented.