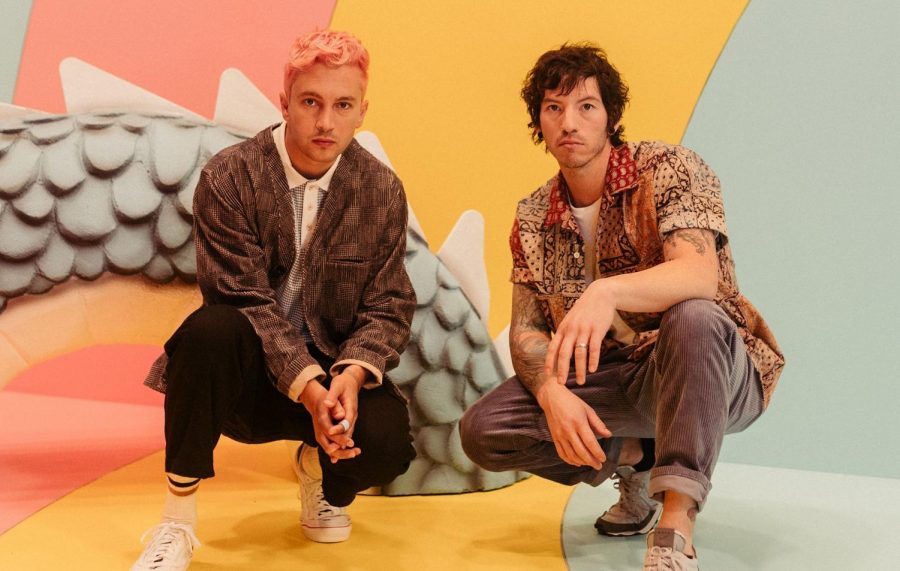 Twenty One Pilots' (Josh Dun [left] and Tyler Joseph) recent album Scaled and Icy ushers in a new era for the group.

On Friday, May 21, Twenty One Pilots ushered in a new era of alt-pop with their sixth studio album, Scaled and Icy. The musical duo, consisting of frontman Tyler Joseph and drummer Josh Dun, blessed fans with 11 new tracks. Scaled and Icy, a play on the phrase “scaled back and isolated,” provides a feel-good set of songs that contrasts their previous more dark album Trench.

Trench is a conceptual album of the journey of escaping from the fictional place “Dema,” which symbolizes the never ending battle with mental illness. Fans of Twenty One Pilots value the openness of lyricist Joseph on his struggles with mental illness. Scaled and Icy represents a shift into a better place while acknowledging that the struggle is ongoing. The contrast in tone and lyrics also conveys some themes about propaganda in the media.

The 2021 album was written by Joseph during the COVID-19 pandemic. The band released their quarantine single “Level of Concern” at the beginning of 2020, which went on to break the Guinness World Record for “longest music video” with their 4,264 hour livestream of the song.

Scaled and Icy is about bringing an escape to those who have struggled over the course of the pandemic. “I was actively trying to push against that natural inclination to go darker,” explained Joseph in an interview for Apple Music. “The idea of adding to the pressure of what’s going on in our world, it didn’t feel right.”

The set begins with the perfect opener, “Good Day.” This song is, on the surface, very bright and upbeat, while masking its darker meaning. Joseph told Apple how the song was meant to emulate a person denying grief and putting on a happy face. The slower bridge with the lyrics, “So I’ma sing my soul, I’ma sing my soul,” ties the song together in such a way that gets listeners swept up in a delighted mood for the rest of the album. This song is appreciable in establishing the contrast in tone and lyrics that will continue throughout the album.

The first single and third track on the album, “Shy Away,” was fans’ first peek into the new era of Twenty One Pilots’ music. Joseph sings how when one doesn’t pursue their goals, they “manifest a ceiling.” With its synthetic-pop beat, the song immediately presents an upbeat mood that listeners will want to bop their heads to.

The band had a livestream experience for the debut of the album in which Joseph did his famous scream-singing on the last chorus of “Shy Away,” which will be the highlight of future live performances. Twenty One Pilots also performed the song on May 23 at the 2021 Billboard Music Awards, the duo’s first live performance in about two years.

“Choker” is the second track on the album as well as the second single released prior to the album’s release. This song has a defining, optimistic rhythm accompanied by genius lyrics from Joseph. The track addresses mental health themes by dealing with “choking” under pressure, and the lyric “I see no volunteers to co-sign on my fears” is symbolic of the loneliness one feels suffering from depression. This song is definitely among the best of the set.

The “Choker” music video is very entertaining, with appearances from Jim, Josh Dun’s infamous golden retriever, and “Trash the Dragon,” the center of the album’s main artwork. “Trash” was a small figurine that Joseph kept on his desk during the writing process for the album. The figurine was a focal point for Joseph’s creativity during the pandemic, and it came to symbolize the creativity Joseph was trying to reconnect with by escaping “Dema.”

The last single released prior to the album is the fifth track, “Saturday.” A feel-good summer song, this bop is not a favorite, but still a great dancing song. The repetitive, anthem-like chorus is one worthy of having a place on any summer playlist. The livestream performance of the song was set it in a colorful party scene, which reflects the nature of the song perfectly.

Track four, “The Outside,” brings a unique style that also makes for a great summer song. Taking from a few different music styles like the rest of the songs, “The Outside” has a groovy beat accompanied by some electric guitar during the line “Or am I on the outside” in the chorus. The song brings a much welcome R&B vibe, and it is a catchy song for listeners to bop their heads to.

“Mulberry Street” and “Bounce Man,” the seventh and ninth tracks on the album, are also fun songs like “Saturday.” Joseph is a major Billy Joel fan, calling it his “feel good” music, and “Mulberry Street” takes massive inspiration from Joel’s “Big Man on Mulberry Street.” Joseph described to Apple how the title refers to a street in New York City, and that he wanted fans to imagine the feeling of being in a big city for the first time since the COVID-19 pandemic.

“Bounce Man” is less popular among fans, but still is a nice song to listen to when looking for a light tune. It is about someone leaving, or “bouncing,” after getting into trouble. The lyrics match the “bouncy” rhythm. While it is not a deeply meaningful song, it is still a nice, upbeat listen.

One of the coolest songs in the collection is the sixth track, “Never Take It.” This song has such a fresh vibe that no one can listen to it without wanting to sing along. This jam is about the media misinforming people and causing division, as seen by the awesome lyric, “They’re trying hard to weaponize you and I.” Dun’s excellent drumming shines as it does on the rest of the album, but “Never Take It” elevates it to a whole other level with the alt-rock style it channels.

The sweetest song on Scaled and Icy is the eighth track, “Formidable.” Likely written for Joseph’s wife, Jenna, or their daughter, Rosie, this song is full of love and awe for its subject. Joseph typically includes a love song in each album; “Smithereens” was Trench’s sweet spot, and “Tear in My Heart” was Blurryface’s, for example. “Formidable” is a gorgeous sentiment that is Beatlesesque in tune, making it a light, yet lovable tune and one of the album’s best.

The last two tracks on the album, “No Chances” and “Redecorate,” display a total tone shift from the previously more upbeat tracks. Reminiscent of the darker style of Trench, these two songs have quickly become fan favorites. “No Chances” has an intense, dark tone right out of the gate that is a shock to the system following the previously upbeat songs. It is a welcome surprise that reminds fans of the band’s roots.

“Redecorate” is an outstanding lyrical masterpiece and a fan favorite for obvious reasons. Joseph was sadly inspired by the death of a friend’s son, and how the family did not redecorate his bedroom, instead leaving it the same as it had been. The song closes the album on a very emotional note, and Joseph knocks it out of the park with the lyrics. Joseph told Apple, “It is a bit delicate, but it’s one of my favorite tracks, and it’s pretty powerful.”

It should be clear to any listeners that Scaled and Icy is the album to listen to this summer. There are too many great tunes to declare just one the best; “Choker,” “Never Take It,” “Formidable,” and “Redecorate” are definitely the cream of the flawless crop, however. This album has fans ecstatic for the new era of Twenty One Pilots’ music, and they cannot wait to see what Joseph and Dun will do next.