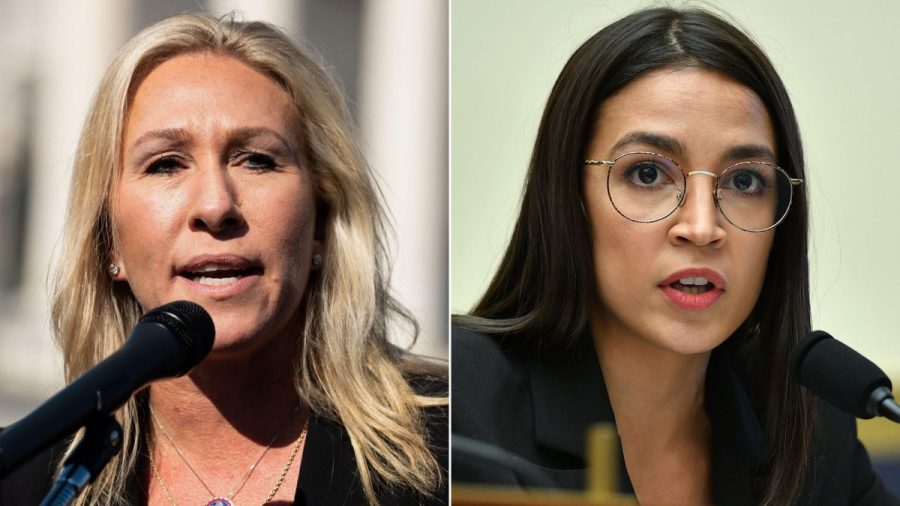 Over the past several elections, Americans have seen bipartisanship take a stronger foothold in the country, almost to the point where the country seems like two different countries rather than two different parties.

Outside of the House Chamber in the U.S. Capitol, Republican Representative Marjorie Taylor Greene (GA) verbally assaulted Democratic Representative Alexandria Ocasio-Cortez (NY), exhibiting how divided the parties have become. This catty, school-girl behavior from Greene is not only embarrassing and childish but sets a dangerous example for how people feel they can speak to minorities and people of color.

The interaction between the two occurred with Greene calling after Ocasio-Cortez saying, “Hey Alexandria” twice. This is already disrespectful in itself because while in their place of work, congress members refer to each other with the term “representative” and then the last name of that individual. Calling after her by her first name demonstrates that Greene does not recognize or respect Ocasio-Cortez’s position in congress.

To further emphasize Greene’s blatant display of disrespect, she begins to yell at Ocasio-Cortez calling her a “terrorist sympathizer” and telling her to defend her “radical socialist” beliefs. Greene continued her boorish behavior, yelling at Ocasio-Cortez, “You don’t care about the American people!” and “Why do you support terrorists and Antifa?”

Greene’s justification for her antics is that Ocasio-Cortez refuses to debate Greene on Ocasio-Cortez’s Green New Deal plan; yet, Greene admittedly hasn’t even read the entire proposal. This was just Greene’s sophomoric attempt at intimidating a Democratic member of Congress.

Unsurprisingly, this childlike and vile behavior does not come as a shock to many considering that Greene is known for it, and even advertises it herself. Before being elected into office, Greene posted a video to her Twitter account confronting gun control advocate and Marjory Stoneman Douglas shooting survivor David Hogg, calling him a coward and attempting to intimidate him by telling him that she was carrying a gun.

The fact that people voted her into office, and many people would still vote for her in the upcoming 2022 election, sends a message to the rest of the world that Americans condone intimidation and bullying those who hold differing ideologies.

Speaker of the House of Representatives, Nancy Pelosi believes that the incident should go to the Ethics Committee because of the “egregious” behavior displayed by Greene. “It’s so beyond the pale of anything that is in keeping with bringing honor to the House [of Representatives],” Pelosi said.

To Greene, the incident is not as serious as it is being made out to be because she claims to have wanted a public debate and she was being denied that. Greene even continues to name-call and pick at Ocasio-Cortez for not satisfying her wishes in the days following the incident, continually referring to her as a “chicken” and “pathetic.”

Ocasio-Cortez, however, is concerned about the wider context of Greene’s words and what they will mean for the tone it sets for the country if her behavior continues to go unchecked. “This isn’t even about how I feel,” Ocasio-Cortez commented. “It’s that I refuse to allow young women, people of color, people who are standing up for what they believe, to see this kind of intimidation attempt by a person who supports white supremacists in our nation’s capital.”

While it is good that Ocasio-Cortez chose the high road rather than stooping to Greene’s mean-girl level, the most troubling aspect of the entire situation is that no one in the Republican leadership called out Greene on her behavior and that there are so many Americans who also applaud Greene for her boorish and ignorant behavior.