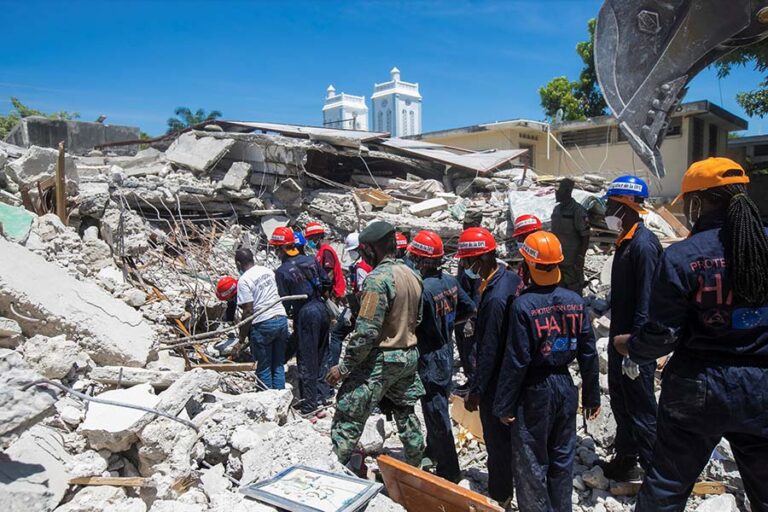 Search and rescue workers search the rubble for survivors amid the devastation of Haiti's Aug. 14, 2021, earthquake.

Although many Americans who live outside of California do not know what it is like to experience an earthquake, most realize that earthquakes can cause mass destruction and loss of life.

Haiti, still in recovery mode from the devastating earthquake of Jan. 12, 2010, was hit by another major earthquake (7.2 magnitude on the Richter Scale) leaving at least 2,200 dead, 12,200 injured, hundreds missing, and wide-spread devastation. Search and rescue are still digging through the rubble of collapsed buildings looking for survivors. Many seismologists agree that this earthquake is more powerful and devastating than the one that occurred in 2010.

Just days after the earthquake, tropical storm Grace swept across Haiti. Compounding matters for Haitians is that the tiny island nation was already suffering from widespread hunger resulting from drought and political and economic turmoil.  Years of political unrest culminated when Jovenel Moïse, Haiti’s president since 2017, was assassinated on July 7 of this year. Moïse was succeeded first by acting president Claude Joseph, and then 13 days later by current acting president Ariel Henry.

Despite aid pouring in from around the world, the lack of stability at the highest level of its government has severely hampered the response to the earthquake. To recover from such striking events, it takes a lot of money, planning, and time to help all the Haitians whose homes and businesses were destroyed in the earthquake. Unfortunately, the current Haitian leadership is ill-equipped to facilitate the recovery effort. This in a country where, according to Reuters news agency, two-thirds of the population make less than $2 per day.

“Haiti doesn’t coincide with places that are trying to offer assistance,” Olympic Heights science teacher Mr. Timothy Large explains. “It’s a problem because there’s lots of money being donated, but there’s a miscommunication with the distribution process and how the money is being used.”

In the meantime, while gang violence and government corruption run rampant in Haiti, there are still hundreds of thousands of Haitians homeless and on the streets. As donations continue to pour into relief effort agencies, Haitians are in real need of tents for both shelter and storage.

Olympic Heights student services secretary Ms. Brittni Arthur organized a relief drive shortly after the earthquake collecting toiletries and medical supplies to ship to Haiti. While that drive has ended, those wishing to help should be careful to make sure that they are donating to reputable agencies. Unfortunately, after disasters such as the recent Haiti earthquake, many scamming agencies pose as relief agencies.

According to Parade Magazine, some of the better agencies to which to donate are listed here. Click on the agency name to go to the website.