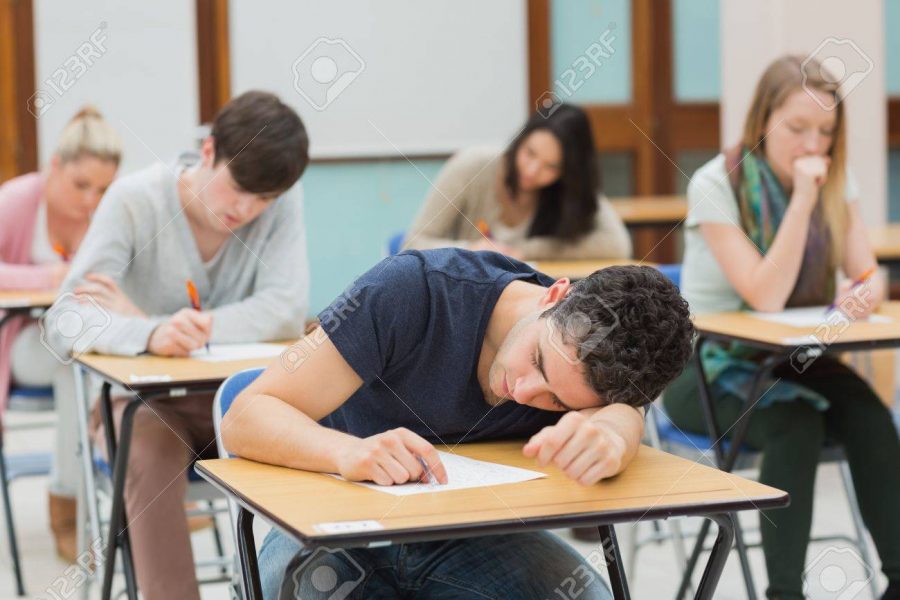 Lack of sleep can have a detrimental effect on how people function through their daily lives. People suffering from sleep deprivation will experience slowed thinking, reduced attention span, lack of energy, and many other issues. Sleep researchers advise getting as much sleep as possible every night to increase the brain’s ability to function properly.

Merriam-Webster explains that “sleep is made up of cycles of non-REM (rapid eye movement) sleep and REM sleep, and is usually considered essential to the restoration and recovery of vital bodily and mental functions.”

During non-REM (Rapid Eye Movement) sleep the brain waves are less active. Stage 1 sleep is when someone is slowly drifting from wakefulness. The brain, heart, and eyes slow down and muscles may twitch and people often become paralyzed. During Stage 2 sleep, people become less aware of their surroundings, the body temperature drops, eye movement stops, and breathing and heart rate becomes slower and steadier.

When someone is in Stage 3 sleep, deep, slow brain waves occur, indicating deep sleep is occurring. During Stage 3 sleep, the muscles are totally relaxed, the blood pressure drops, and breathing slows. Stage 4 sleep is the only stage where REM occurs. This is due to dreaming, which is most common in Stage 4 sleep, but can occur in other stages. The eyes often move around under the eyelids, often creating the effect that the eyes are watching the dream occur in real life, as dreams occur in real-time. Surprisingly, the brain waves closely mimic that of an awake brain. The cycle takes about 90 minutes total to complete.

Scientists recommend adults sleep for seven hours or more per every 24 hour period, while they recommend teens sleep for eight to ten hours, according to the Centers for Disease Control and Prevention (CDC) and The National Sleep Foundation.

Sleep is such a vital part of success because of what it does for the body. Dr. Seth Alper, Olympic Heights’ AICE Psychology teacher, explains, “Sleep acts as a recharge to your body’s battery and serves as a warning sign when not enough is received (as shown through tiredness, through sickness, and stress). The lack of sleep may influence your ability to process information, your vision, your health levels, and your mood.”

Many people stay awake for extensive amounts of time in order to do homework and study or work while the house is quiet at night. This has a harmful effect on their sleep cycle. Scientists do not know exactly what occurs deep within the brain during sleep, but they do know that some biological processes do occur.

According to Healthline, “the brain stores new information and gets rid of toxic waste, nerve cells communicate and reorganize (which supports healthy brain function), and the body repairs cells, restores energy, and releases molecules like hormones and proteins,” while someone is asleep.

For adults, the lack of sleep “will lead to increased stress, possible heart issues, lack of energy, lack of focus, and can often negatively impact one’s emotional wellbeing,” Alper explains. It can also make people more prone to strokes and obesity. Mrs. Kathleen Keithley, OH psychology teacher, says that sleep deprivation can have a negative impact on mental health, such as leading to depression and it can exacerbate pre-existing health issues.

For teenagers, the lack of sleep will have a damaging effect on their ability to succeed in school. Not only will teenagers have trouble focusing, but they have trouble recalling information properly or storing the information within the brain so that it can be accessed later, such as during an assignment, quiz, or test.

“I see this a lot. My students who get very little sleep don’t perform at the top of their game,” Keithley said. “They forget things, it’s harder to pay attention in class, and it is much harder for them to think critically. A lot of times this directly impacts their grades.”

Many students believe it is better to stay up late and study; however, it is more beneficial to get a good night’s sleep. It is more important to be able to focus during school than stay up late studying because if a student does not sleep, scientifically speaking, they will not perform at their best.

Some people have trouble falling asleep, staying asleep, or waking up. Doctors recommend going to sleep and waking up at the same time every day so that people keep a consistent sleep cycle. Doctors suggest turning off all screens about an hour before bedtime because the blue light emitted from electronic devices dramatically limits the amount of melatonin produced. Melatonin is the hormone that regulates the sleep-wake cycle. Since it is better to limit screen time before bed, people should read a book with dim light, color, draw, meditate, or do yoga.

Doctors recommend getting out of bed and doing something quiet, without picking up any electronic devices, in dim light when people wake up in the middle of the night and cannot fall back to sleep in 20 minutes. This acts as a  reset for the brain’s sleep system and can often make people tired again. Sleep experts say that when people begin to feel tired again they should get back in bed and try to fall asleep.

For people who have trouble getting out of bed or waking up in general, doctors suggest putting an alarm clock out of reach, which requires people to get out of the bed to turn it off. Doctors advise working out in the morning rather than at night, as this boosts metabolism for the day and does not get people pumped up right before bedtime. Doctors do not know everything about sleep, but they do know how important it is and are trying to make what they do know more accessible so that people can function at their best.