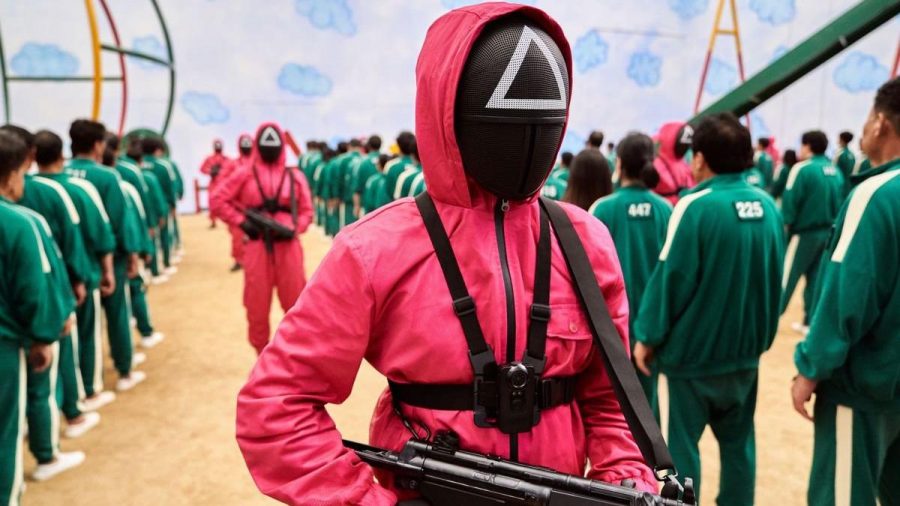 The macabre Squid Game is the product of director Hwang Dong-hyuk's creative imagination.

Filled with macabre, a new and extremely popular show, Squid Game, takes place in Seoul, the capital of South Korea. Hwang Dong-hyuk, the director of the show, originally released the show on Korean streaming services. The show was then distributed worldwide through Netflix on Sept. 17.

Less than a month after its initial release, Squid Game has become the most viewed show on Netflix. According to indiewire.com, “Netflix claimed on October 12 that Squid Game had ‘reached’ 111 million viewers, making it the biggest series launch in the streaming service’s history.”

The Squid Games start with around 450 adults in distressing financial situations being drafted to participate in the games that occur throughout the show. Every movement of the players is observed by strange people in red costumes and masks. These masked figures are also responsible for killing losing players of the games.

There is a leader of the masked figures, known as the “Front Man,” who wears a black mask and outfit. He believes that these adults deserve a second chance at life. Therefore, he created various games and has followers who carry out and enforce his rules.

As the players walk onto the playing field of their first game, ‘Red Light, Green Light,’ they are oblivious as to what will happen. A mechanized doll figure turns to face the players and calls the words “Green Light.” This is the players’ signal to move towards the finish line. However, if they keep moving when the doll calls “Red Light,” they are shot and killed. When this happens for the first time, the players are sent into a panic.

When the first game concludes, the surviving players return back to the lobby and wait for the following game to commence. The “Front Man” has also hung a massive ball from the roof of the lobby area. The ball contains a cash prize for successfully completing all of the games. As players win more games, the jackpot of money drastically increases.

This show explores the ideals of “man vs. man” along with ‘“man vs. self.” It explores how fundamental values and ideals can change with the state of one’s mental stability. The premise of the show proves that normal, amiable people can transform into savage animals when they are in desperate circumstances.

This show also has a mildly disturbing aspect of children’s games being transformed into deadly battles. “It shocked [me] to see what happened in some of the scenes,” OH sophomore Artyom Medved stated.

The quite contrasting and controversial themes of this show are the works of Dong-hyuk’s creative mind. “There’s an irony in our most beautiful and innocent memories being changed into the most horrifying reality,” he explains. Although this show’s plot is highly unrealistic; it does perceive humans as willing to do almost anything and risk their lives just to get money.