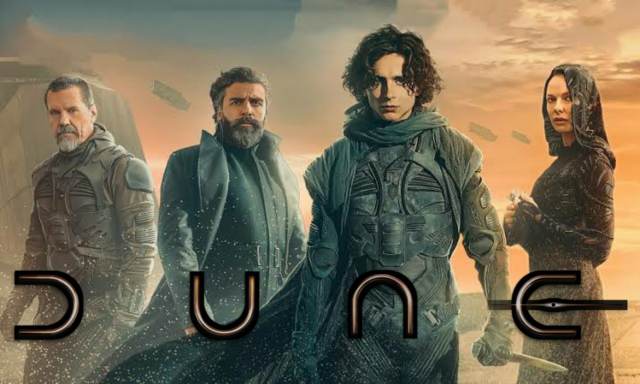 The $165 million dollar Dune has been met with mixed reviews.

The latest film version of Dune was released in October and since then has received mixed reviews. For many lovers of this classic sci-fi adventure based on the 1965 Frank Herbert book, the movie does a great job of capturing the mystical scenes Herbert so vividly details in his book. For others, the movie is a disappointment and does not live up to their expectations.

The cast does a great job of captivating the audience and enhancing the spirit of the characters. The film features some widely acclaimed actors such as Zendaya, Timothée Chalamet, Rebecca Ferguson, Oscar Isaac, and many more.

The story takes place on a deserted planet, Arrakis, which is known as Dune and is set in the year 10,191. The filmmakers make effective use of lighting, sets, and costuming to capture Herbert’s vision of the future.

“In the real stillsuit [a full body suit worn in the open desert to preserve the body’s moisture] of the book and in the film, there is a network of tubing that collects air from the outside through the nose piece while also collecting the absorbed body water, which goes through a filtering system…, and then the distilled, potable water also creates a cooling system around the whole body,” explains The Hollywood Reporter. “It is all mechanized by a pumping system that starts at the heels with the whole thing powered by the musculature and movements of the body.”

The film itself covers the themes of survival, trust, fear, and determination. “Overall, the plot was emotional and heartfelt as well as suspenseful,” Olympic Heights junior Nick Conklin said, sharing his thoughts on the movie. “I thought Dune was quite good, as Zendaya’s performance was excellent.”

However, others did not have the same opinion. Many felt that the promotion of the film was a bit misleading and did not match what was actually in the film. One prime example of this is the use of the actress Zendaya. In many of the posters and trailers for the movie, Zendaya is expressed as one of the main characters of the film, yet she is only on screen for about seven minutes out of the lengthy, two hours and 35-minute film.

OH junior Reed Benson thought Dune, “was boring because of the lack of Zendaya in the movie when they pitched it as her being a main character.” Many viewers shared similar thoughts and many agree that the movie felt quite tedious.

The sets and backgrounds used in the film to depict an intergalactic universe make the movie feel more creative and artistic. It makes the movie more coherent and draws the viewer’s eyes to the fantasy planets and settings shown throughout the cinematic feature.

As Dune has brought in around a whopping 300 million dollars at the box office, with a production budget of 165 million dollars, this movie is clearly a success. Most movies have mixed reviews, but this revenue shows just how much everyone was excited to see the movie when it was playing in theaters.

Overall, Dune is an adventurous and action-packed film with creative sets, costuming, and a fantastic, acclaimed cast. Although there have been mixed reviews, it is clear that director Denis Villeneuve had a strong vision in mind as he brings Frank Herbert’s novel into the 21st century with breathtaking visuals.