EDITORIAL: It’s time for Congress to reign in Big Tech 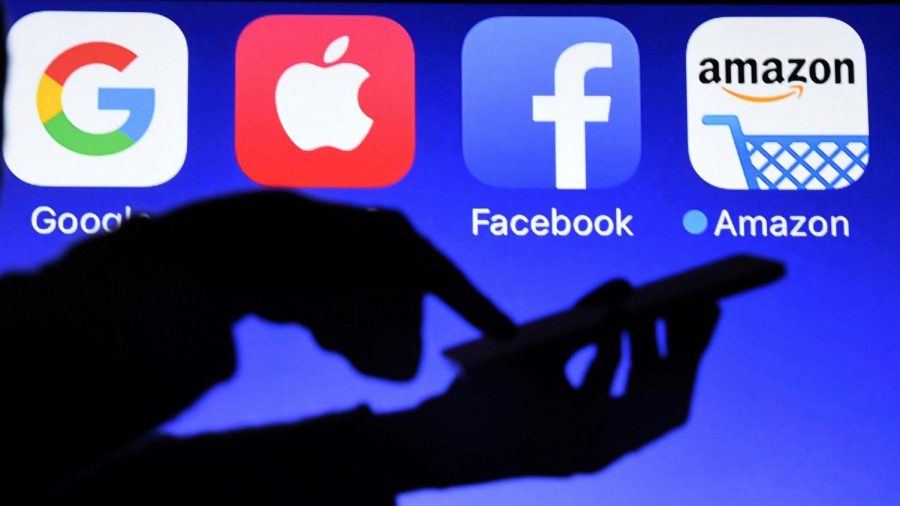 The Torch calls for Congress to curtail some of the special privileges Big Tech companies have been granted.

Tim Cook of Apple. Bill Gates of Microsoft. Sundar Pichai of Google. Mark Zuckerberg of Facebook and Meta Platforms Inc. Jeff Bezos of Amazon. Is it possible that these five men are responsible for the downfall of society and the uprise of the power of Big Tech?

“The phrase ‘Big Tech’ seems new to our lexicon, especially having gained traction during the previous administration through the 2020 general election,” stated The Times-Tribune. “It also seems somewhat ill-defined. The New York Times and financial corporation Bloomberg L.P. agree that it refers to Google, Apple, Facebook, Amazon, and Microsoft. Sometimes they interchange the label with ‘the Big Five.’” These five companies raked in roughly 441.8 billion dollars in 2020.

As these five companies are known as tech superpowers, they play a substantial role in the powers and abilities of Big Tech. Over the past few years, there has been a growing demand for more oversight and regulation of Big Tech via the government to ensure that these companies do not become extremely powerful and are being fair. The Torch echoes those demands.

The government needs to regulate Big Tech to prevent monopolies and stifle competition. However, social media platforms such as Instagram, Facebook, and Twitter should be able to control the content of their platforms by being able to remove posts or block the accounts of people who repeatedly post inappropriate or dangerous content.

The U.S. government has been attempting to take legal action against Big Tech companies to prevent any monopolization over the market and to ensure that Big Tech cannot control the mass information that is accessible to a free country. Antitrust laws have given the government the right to take this action. In June 2021, House lawmakers began considering a legislative overhaul to U.S. antitrust laws, which will aid in the attempt to reign in “the Big Five.”

The members of the House Judiciary Committee voted on six bills that would attempt to block tech superpowers from “prioritizing their products online, force them to break off parts of their businesses and generate more resources for the law enforcement agencies that police Silicon Valley,” according to The New York Times. The Committee took its first vote that June afternoon. Of the 41 members, 29 voted in favor of the legislation with 12 opposed.

Some social media platforms have become powerful enough to control the flow of the majority of information in a free society, and they are doing this aided and abetted by government policy, Section 230. Believing that these are private companies who are only exercising their First Amendment right is reductive framing that ignores that they do so in a privileged manner. They are immune to liabilities of the First Amendment, such as those that newspapers are subject to. Also, content moderation decisions occur at an extraordinarily unparalleled scale.

“Section 230 of the Communications Decency Act, which was passed in 1996, says an ‘interactive computer service’ can’t be treated as the publisher or speaker of third-party content,” says theverge.com. “This protects websites from lawsuits if a user posts something illegal, although there are exceptions for copyright violations, sex work-related material, and violations of federal criminal law.”

Section 230 shields Big Tech companies from lawsuits. However, it was never meant to be indestructible. The loopholes within Section 230 allow social media companies to do virtually whatever they want. Section 230 will make it extremely difficult to pass antitrust laws against Big Tech.

People are not forced to use these platforms and can boycott them if they feel that they are not being treated fairly. Although it may not be morally right, social media companies do have the right, as private companies, to control what is posted on the platform, block accounts, and delete posts. However, they should not have free rein and complete control over this.

That being said, social media platforms should have the right to remove posts or block accounts when someone repeatedly posts things that are offensive to the majority of people, such as something that is blatantly racist or stereotypical, something that is illegal, or something that includes violent or obscene acts.

Social media companies should be barred from removing posts that express personal opinions. If someone posts their opinion, which is right-leaning, and a liberal media company takes it down, this is the company exercising their current ability of content moderation at an extraordinarily unparalleled scale. The filtering of information that these companies partake in, on both sides of the political line, creates an uninformed American society.

At this point, these companies are violating the spirit of the First Amendment rights of anyone whose opinion doesn’t agree with theirs. By doing this, they are filtering out other points of view and other news. This prevents the American public from getting real, bipartisan news and making logical, sound decisions based on any and all information provided.

Social media platforms should be more cognizant of how they are treating their users and to what extent they captivate their attention. Facebook is known to captivate the attention of its users by giving them a feed that is more likely to make them angry than calm because causing a negative emotional reaction will captivate the users’ attention longer.

Snapchat has features that encourage users to use the app every day, thereby encouraging addiction. These features include what is called a “Snap Score” and “streaks.” According to indiatoday.in, “Snap Score indicates how active and social you are on Snapchat.”

By creating this feature, Snapchat has essentially designed a way to activate a feeling of reward, as the “Snap Score” climbs as one uses the app more. Teens often obsess over this number or compete with their peers to see who has the highest “Snap Score.” This causes teens to become addicted to a number when in reality, it is meaningless.

When someone partakes in keeping “streaks” with their friends, this means they send each other Snapchats at least once a day. This also creates a rewarding feeling for the teenage brain because the higher the number, the longer teens are in touch with their friends.

Teens become so addicted that they will often give their Snapchat passwords to friends when they do not have access to their accounts. They do this so that their friends can keep their streaks for them. Excessive social media use is harmful to teenagers, which shows that regulations on Big Tech may be beneficial to underdeveloped brains.

Not only should social media platforms be more careful with how they captivate the attention of their users and what feeds their users are allowed to see, but these companies also need to be held responsible for the lack of protection of personal information. According to techrepublic.com, “Most consumers (74%) feel they have little control over how their personal data is used.”

It seems that Big Tech companies have little to no regard for the privacy and safety of their users. For example, when someone views an ad on Instagram, then sees an ad for the same thing on Google; it is very apparent that these companies are exchanging their users’ private information. These companies publicly deny accusations of selling people’s information to other companies, but does the American public believe Big Tech?

When Facebook, Instagram, and Google ads are similar, this is because the services are learning what everyone’s individual interests are and sharing it with each other; by “personalizing the experience,” they are really just working together against the average American consumer. There should be a more accessible opt-out option so that people can have more control over their personal information and can have trust in these companies to protect that information.

The questions that American citizens and the U.S. government, whose job is to protect Americans, need to ask themselves are: Are we truly going to allow the power of Big Tech to determine the terms of free thought, speech, and behavior in the U.S.? Will Americans, a brave and independent people, speak through their representative self-government and strip down the Congressional privileges these companies no longer deserve?

The Torch believes they should.