Florida manatees dying off at an alarming rate 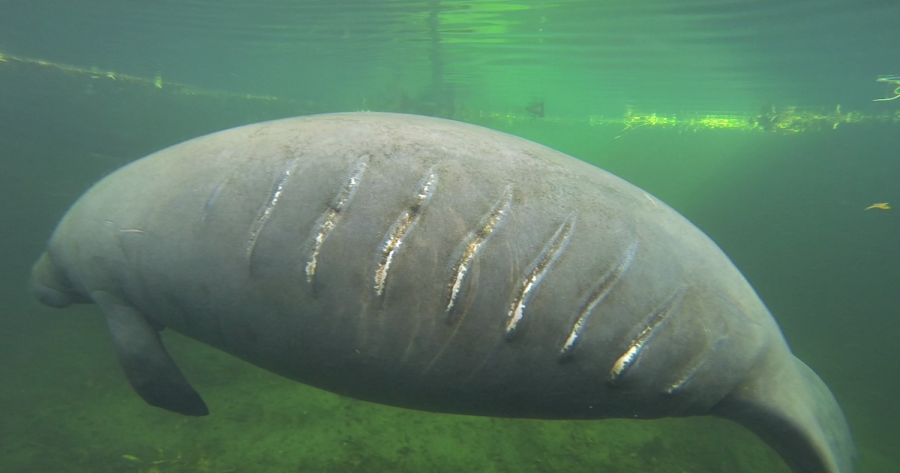 It is not uncommon to see manatees with scars from being hit by boat propellers. Not all manatees survive the encounter, which is one factor contributing to increasing death rate of the species.

The Florida manatee, which eats approximately 10 percent of their body weight every day, is experiencing a rapidly growing death rate due to a lack of available food in the form of water grasses, weeds, and algae. Adding to the problem is that manatees, being slow-moving creatures, are often hit by boats and barges, leading to more deaths.

These beloved animals are known as gentle giants. They can grow to be nine to 10 feet long and weigh about 1,000 pounds on average; however, some do grow to a more substantial size. Manatees are peaceful creatures and do not attack humans. However, the same can not be said for humans and their often unintentional actions that often kill manatees.

According to the U.S. Fish & Wildlife Service, approximately 866 West Indian manatees died in Florida in the first seven months of 2021. For such a small population, that is a vast number of manatees that died in less than a year.

“After being downlisted to vulnerable from endangered status in 2017, their numbers are plummeting once again,” said Ms. Heather Jewett, an AICE Marine Science teacher at Olympic Heights. “The current threats manatees face are all human-induced. These include toxic blue-green algae blooms, loss of seagrass, red tide, and boat propeller collisions.“

Manatees are often found with propeller marks raked across their backs, even if they are alive. It is estimated that over 65 manatees have been found dead this year from boat strikes alone. This does not include the number of manatees that have been injured. This may be due to people speeding through no-wake zones or slow-speed areas that are specifically designated for the well-being of manatees.

When these signs and areas are ignored, more and more manatees will continue to be killed. Manatees typically swim near the surface because they breathe oxygen, like humans. This is most likely a factor in the high death rate among manatees.

Other possible reasons for the high death toll in recent years are the red tide and algae blooms which have and are causing the death of the seagrass bed that the manatees feed on. Red tides and algae blooms are caused by runoff and pollution from land. The nutrient-filled runoff can cause high concentrations of nitrogen and phosphorus, which causes rapid blooming and toxic algae, causing manatees to starve.

Red tides release toxins and consume the dissolved oxygen in the water, which kills the seagrass along with other marine animals. This greatly affects the manatees in areas where red tides and algal blooms occur commonly, such as in south Florida where the West Indian manatee species is found.

Water pollution is a major issue in the world, as is negligence. These manatees are suffering and dying due to the reckless and ignorant behavior of humans. Jewett continued to say, “Until the state of Florida makes significant water quality improvements, this will unfortunately continue to happen and the cows of the sea may no longer be one of Florida’s claims to fame.”