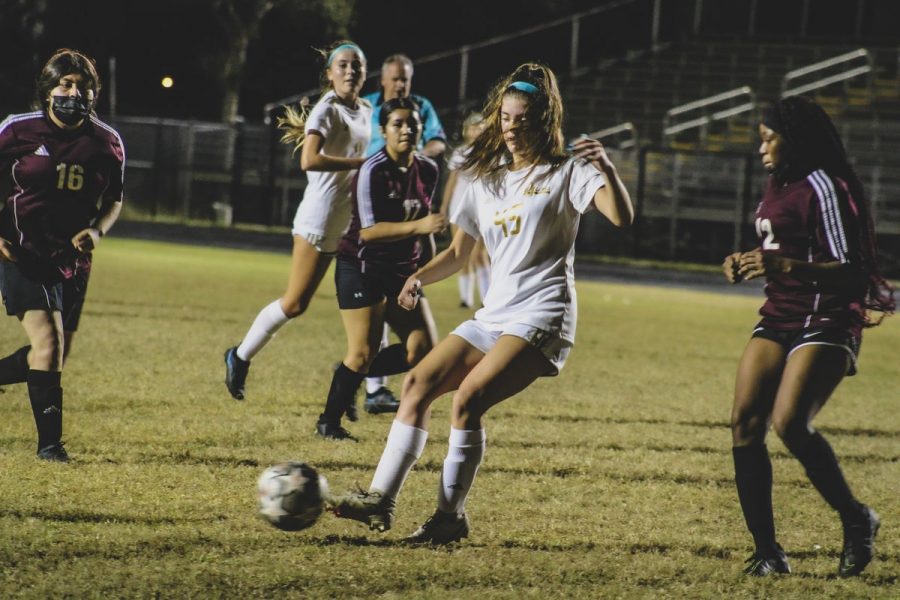 Olympic Heights junior forward Lindsey Osinoff (#45 in white) passes the ball in a game against Lake Worth. Osinoff leads the district in goals scored and points total.

The Olympic Heights girls soccer team is off to one of the best starts to a season in the program’s history, posting a 12-0-2 record through its first 14 games while out scoring its opponents 111 to 3 with 11 shutouts. The Lady Lions have not given up more than one goal per game and that has only been to three opponents.

Head Coach Jim Cappello explains, “We are just taking things one game at a time, but we are making the most of our chances each and every time we step on the field.” As a result, the team has realized success from their hard work, motivation, and strong team chemistry.

While stressing the team aspect, Cappello points to the amazing season sophomore defender Ava Cardaci is having. “All of [the players] have come out prepared and ready for this season, but one that has stood out is Sophomore Ava Cardaci,” Cappello commented. “She has worked on moving into the attack and currently has assisted 15 goals while scoring three herself. I think she has made the biggest stride.”

Cardaci has worked very hard to bring up her game to another level this year, stating that she used the offseason to work on “stamina, crossing the ball, and footwork.” It is clear that Cardaci was very motivated to show up with a strong start to the season, along with enjoying the feeling of the team treating each other like they are a family.

“Everyone on the team are good players individually, and we have been able to be successful with how well we bond together as a team,” Cardaci said, expanding on the idea of how important team chemistry is to the girls soccer team this year.

With this long list of big wins against these schools, Coach Cappello emphasized “our expectations are the same each year, to advance to the district finals and give ourselves an opportunity to reach regionals. This season however was projected to be a rebuilding year, but so far, we have exceeded those expectations to this point and hope to continue improving as we reach the district tournament.”

Other key contributors to the team’s success also are atop the stats list for District 6A D13. Junior forward Lindsey Osinoff leads the District with 59 points. She also leads the district in goals scored with 24 and in points per game at 4.2.

Osinoff says her personal goal for this season “is to do my best every game and push the team to winning districts and hopefully progressing farther than that.”

Following Osinoff on the points scored list are freshman forward Francesca Rojas (46), junior forward Valeria Schiavo (35), and junior midfielder Emily Graham (33). Clearly, Olympic Heights girls soccer is in full control of the district as they lead in the majority of the statistical categories.

Comparing this season to the 2020-21 season, Cappello explained, “With so many seniors graduating last year, and Covid having shortened our season I feel that the returning players were waiting for their opportunity to shine. Last season we graduated two girls with 50 goals, and that doesn’t leave much room for other forwards. Now with them gone, [this season’s team is] showing that they are the next generation of Lions Soccer.”

Despite the fantastic start to the season, Cappello stresses that there is not much of a difference in this season’s game plan compared to previous seasons, as the team continues to just focus on one game at a time.

There is no denying that this year’s squad has benefited from what some might call a “soft schedule” to start the season. According to MaxPreps, The Lady Lions have only played two teams with winning records in Seminole Ridge (9-3-2) and St. John Paul II Academy (3-2). The Lions tied Seminole Ridge 1-1 and beat St. John Paul II Academy 4-1. The Lions other tie was a 0-0 affair against Spanish River (3-4-3) on Friday, Dec. 17. Olympic Heights has yet to beat Spanish River in the two schools’ long rivalry.

Taking Seminole Ridge, St. John Paul II Academy, and Spanish River out of the equation, the combined win/loss record of the Lions other opponents is 11-71-2. Only two of those other opponents have more than one win on the season.

Cappello welcomes the questioning of his team’s schedule thus far, explaining, “Our schedule was arranged in such a way expecting a rebuilding year with losing so many to graduation and other reasons. I always schedule a lot of games, and use them as practices instead of scrimmaging against ourselves or junior varsity. These games are typically played by reserves to give them game experience; however, the goal this season would be for all players to earn confidence. It gives everyone a chance at “game experience,” and each and every player normally scores for us during the season.

“Also, winning, just as much as losing, is contagious and sometimes learning to win is hard to come by,” Cappello continues. “We are aware that winning hides mistakes, and we are a long way from where we want to be, but we feel that the second half of the schedule helps us in the next process of development towards hopefully qualifying for regionals.

“Last but not least, the girls themselves overall have come out better than expected.  We have a freshman (Francesca Rojas) that came in as a forward and has played better than we have had a freshman play in a long time and due to Covid some of the girls off the bench that were sitting behind seniors are now in position to make impacts in the games and they are taking the opportunities.  We know we have some bumps in the road coming up, but look forward to the challenge of trying to get to the district finals.”

Cappello points to the 1-1 tie against Seminole Ridge as an indicator of how good this year’s Lions team is compared to years past, commenting, “The best example of our growth with the schedule was being down to Seminole Ridge, a team that has beaten us in the regular season the past two seasons that we play almost the same time each year. They graduated one senior, so going into the match we figured for them to be a goal or two better than us.  With our plan, the girls had confidence to not panic and believe that they were going to score.  They never panicked, and set up several great scoring opportunities before they tied the game.”

With an eye on Wednesday’s matchup with the Bobcats at Boca Raton High at 6:00pm, Cappello and team feel they have the work in to be able to possibly notch an upset, setting themselves up for a strong finish as they head into postseason play.