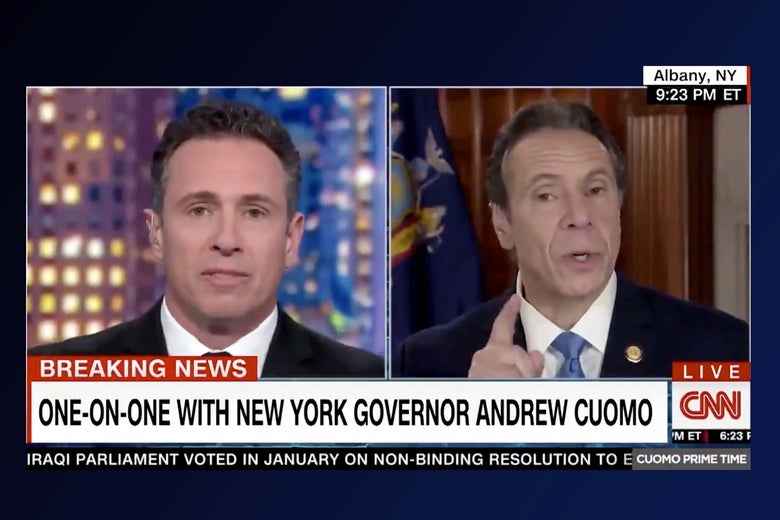 Former CNN news anchor and host of “Cuomo Prime Time,” Chris Cuomo, was fired by CNN after it was discovered that he used his position at CNN to help then New York Governor Andrew Cuomo, his brother, deal with 11 sexual harassment allegations.

Andrew Cuomo, a Democrat, was New York’s governor from 2011 until his resignation in late August of this year. Always popular within his party, he became one of the Democrats’ leading critics of Donald Trump during Trump’s term as president.

Then Gov. Cuomo was also being heralded for his leadership through the first wave of the COVID-19 pandemic in hard-hit New York state.

However, as later reported by The New Republic, it was revealed that Andrew Cuomo had been ordering his staff “to undercount COVID-19 deaths at nursing homes to bolster his image as a competent governor who was adept at facing crises.”

However, Andrew Cuomo’s popularity began to wane when a series of sexual harassment allegations against him began to come to light in Sept. 2020, accusing the sitting governor of unwanted groping, kissing, and sexual comments.

A subsequent investigative report from the office of New York Attorney General Letitia James detailed accounts from women accusing Andrew Cuomo of sexual harassment and groping, as well as claims that he created a “hostile work environment,” as The Wall Street Journal reported.

Fellow Democratic politicians such as New York senators Chuck Schumer and Kirsten Gillibrand have noted that Andrew Cuomo abandoned many of his allies on his way to the top of the political food chain, resulting in a lack of support when the sexual harassment allegations started to become public. One of Andrew Cuomo’s advisers told The New York Times that Andrew Cuomo “has burned so many bridges that he has left himself with virtually no path forward.”

One person Andrew Cuomo could turn to for help in fighting off the sexual harassment allegations is his younger brother, Chris Cuomo, former host of CNN’s “Cuomo Prime Time.”

Andrew Cuomo had often been a guest on his younger brother’s show before the sexual harassment scandal broke, most notably appearing to discuss his handling of the COVID-19 pandemic in the state of New York.

CNN first started allowing Chris Cuomo to interview his brother in March 2020. Chris Cuomo continued interviewing his brother on a more regular basis as the COVID-19 pandemic panned out. Andrew Cuomo’s regular appearances on “Cuomo Prime Time” boosted ratings for CNN as the brotherly banter was relatable to most Americans.

It could be argued that like all the prime time shows on 24-hour cable news networks such as CNN, Fox News, and MSNBC, “Cuomo Prime Time” was not a news reporting program but a political commentary show wherein the host and guests give their opinions on the news. These evening commentary shows are where the networks make their money.

Still, to many, Andrew Cuomo’s frequent appearances on “Cuomo Prime Time” came across as unethical, and CNN president Jeff Zucker came under criticism for allowing it in order to keep the show’s ratings elevated. Nevertheless, the appearance of Andrew and Chris Cuomo on air discussing their father Mario Cuomo, New York governor from 1983 to 1994, and bantering about Andrew Cuomo’s inclusion in People’s “Sexiest Man Alive” issue, “Cuomo Prime Time” seemed to have turned from a political commentary show into a reality TV show.

Then, came the sexual harassment allegations against Andrew Cuomo. While the governor’s appearances on his brother’s show stopped, Chris Cuomo did occasionally comment on the allegations made against his brother. From a journalistic perspective, this is inarguably unethical, as it creates a conflict of interest and damages the credibility of not only Chris Cuomo but CNN as a whole.

Chris Cuomo’s real problems began once it came to light that he had involved himself in his brother’s situation. As one of the most successful journalists at one of the largest news networks in the world, Chris Cuomo had many connections at his disposal which he used to advise his brother. Chris Cuomo was reported to have participated in strategy sessions with Andrew Cuomo’s team, and he gave his brother advice on how to respond to the criticism he was receiving.

For this breach of ethics and destruction of journalistic integrity, he was initially suspended indefinitely from CNN, pending an investigation. The breach of protocol was impossible to ignore, and Chris Cuomo was ultimately fired from CNN.

Other renowned news anchors denounced Chris Cuomo’s actions in using his position at CNN to aid his brother. CNN’s own Jake Tapper told The New York Times, “I cannot imagine a world in which anybody in journalism thinks that that was appropriate.”

CNN had little choice but to fire Chris Cuomo. He had crossed a line that obliterated any semblance of journalistic integrity. Still, CNN cannot walk away from the Cuomo affair without bearing the brunt of some of the responsibility of what Chris Cuomo did. By allowing Chris Cuomo to give his brother free access to millions of viewers on a regular basis in order to advance his own political agenda, CNN helped set the stage for what was to follow.