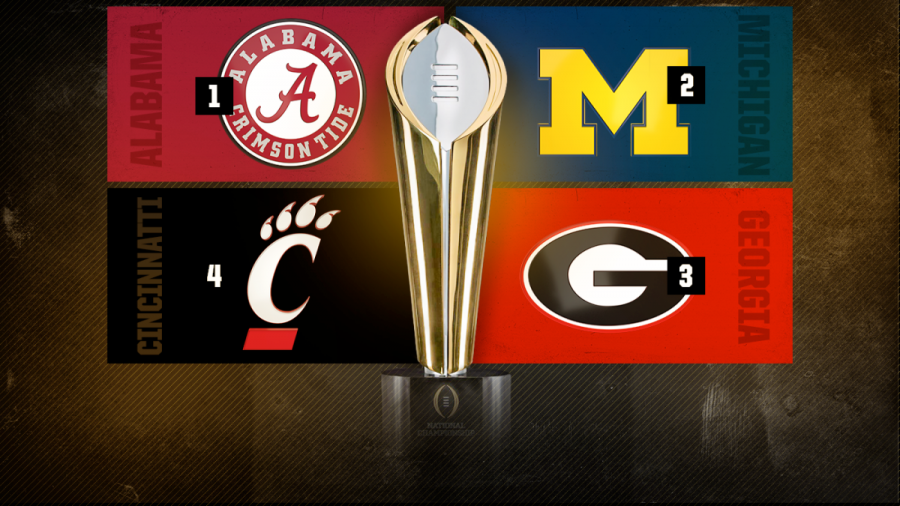 The 2021 College Football Playoffs start Friday, Dec. 31, with Alabama taking on Cincinnati in the Cotton Bowl at 3:30pm and Michigan facing Georgia in the Orange Bowl at 7:30pm.

Alabama, Michigan, Georgia, and Cincinnati. These are the four teams who remain in contention for college football’s 2021 National Championship. They represent the College Football Playoff teams and two of the six “New Year’s Six” bowl games. Here’s a breakdown of what each team brings to the table before the big game at Lucas Oil Stadium on January 10th.

Nick Saban’s squad is back in the driver’s seat of the College Football Playoffs for the second straight year. In the eight years since the CFP was established, Alabama has made the cut seven times, and five times as the number one seed. The frequent fliers have made it more than any other team. One might say the Tide has been rolling for a while now.

Things got a little dicey for the Tide midseason after a tough loss to an unranked Texas A&M team, but they’ve found their stride in the last few weeks. They’re entering this Cotton Bowl game on New Year’s Eve coming off an SEC Championship game win against 3rd ranked Georgia in which they embarrassed the nation’s top defense by scoring an astounding 41 points.

Quarterback Bryce Young just won the Heisman Trophy, the Maxwell Award for the most outstanding player, and the Davey O’Brien Award for the nation’s best quarterback. Wide receiver Jameson Williams might just be the best pass catcher in the 2022 NFL Draft, and linebacker Will Anderson, Jr. won the Bronko Nagurski Award for defensive player of the year. Anderson’s 15.5 sacks led the nation.

And of course, the Tide are led by the greatest coach college football has ever seen in Nick Saban. Alabama is no stranger to David vs. Goliath-like situations, and contrary to the classic tale, David rarely ever trumps the Goliath from Tuscaloosa.

Perhaps no other team ended the season as fired up as the Michigan Wolverines. It started with their pivotal win against Ohio State in the classic BIG10 rivalry game. Head coach Jim Harbaugh got his first-ever career win against the Buckeyes, and then led his team to a BIG10 Championship game slaughter of the Iowa Hawkeyes 42-3.

On the field, this team is led by senior defensive end Aidan Hutchinson. Hutchinson is a force on the defensive line and could potentially be the number one overall pick in April’s NFL draft. He was second in college football in sacks with 14, behind Alabama’s Anderson, with four of those sacks coming in his last two games. Hutchinson won the Ted Hendricks Award for defensive end of the year, the Lott IMPACT Trophy for the most outstanding defensive player, and the Lombardi Award for the Nation’s top player overall. Hutchinson is peaking at the right time as Michigan heads into their first appearance in the CFP.

Senior running back Hassan Haskins has been absolutely steaming on the ground with nine touchdowns in his last three games, and the offense as a whole has been running explosive play after explosive play thanks to the genius of offensive coordinator Josh Gattis. Gattis won the Frank Broyles Award for assistant coach of the year for a reason, as he played a big part in Michigan’s late-season playoff push.

It also doesn’t hurt that Michigan has the winner of the Lou Groza award for best collegiate place-kicker in Jake Moody. This Michigan team knows they’re different from Wolverines of the past, and statement by statement, they continue to prove their doubters wrong.

The 2021 Dawgs enforced their will on teams with punishing defense throughout the regular season, only allowing an average of 6.9 points per game. That number jumped to  9.5 after the loss to Alabama in the SEC Championship Game. The Georgia defense registered three shutouts and only gave up 10 or more points four times excluding the Alabama game. This unit finished second in yards allowed per game as well as fifth in sacks.

The Bulldogs are led by future NFL draftees Nakobe Dean and Jordan Davis. Dean is a projected first round pick who won the Dick Butkus award for the most outstanding linebacker. Davis is regarded as the best interior defensive lineman in the class, standing at a colossal 6 feet 6 inches at 340 pounds. He won the Outland Trophy for the most outstanding interior lineman as well as the Chuck Bednarik Award for defensive player of the year.

Offensively, this team was not outstanding, but there’s reason for optimism. Standout wide receiver George Pickens is back to full health. His presence on the outside is sure to make QB Stetson Bennett more comfortable. Georgia’s leading receiver this season was tight end Brock Bowers, with a lowly 791 yards. Kirby Smart is an excellent coach, who is a seasoned veteran and has CFP and, most importantly, National Championship experience. Finally, with a defense like this team has, any game is winnable for them.

SEC champion Alabama, BIG10 champion Michigan, SEC runner-up Georgia, and… Cincinnati? That’s right. The Cincinnati Bearcats, the American Athletic Conference champions, are the first “group of five” team to make the College Football Playoff in its short history, and rightfully so. Head Coach Luke Fickell won The Home Depot Award for Coach of the Year after leading his team to an undefeated 13-0 season. Given that Cincinnati put up quality wins against a ninth-ranked Notre Dame team and a 21st ranked Houston team, the CFP selection committee had no choice but to give the Bearcats a spot in the top four.

Cincinnati’s immense star power leads them to nothing but wins. Senior quarterback Desmond Ridder is a polished one. He was recruited by Luke Fickell, and has played every snap of his collegiate career under the Fickell regime. Ridder is being touted as one of the best QBs in the 2022 NFL draft class and just might be a first round pick for his ability to both pass and run the ball very effectively.

Alabama transfer junior running back Jerome Ford punishes teams with explosive plays on the ground, running for over 1,200 yards and 19 TDs this season. Defensively, Ahmad “Sauce” Gardner is a name that stands out. Not just because they call him Sauce, but because he is an excellent defensive back, one that will probably be a first-round draft pick. The Linebacker duo of Deshawn Pace and Joel Dublanko were great for the Bearcats this season with Pace leading the team in interceptions and Dublanko leading the team in tackles.

Cincinnati has already made history just by getting into the playoffs, but they aren’t done yet. Beating Alabama will be an uphill battle, but this team has continued to defy all odds and looks to continue that trend come Friday afternoon showdown with Alabama.