Spiderman: No Way Home the best Marvel film to date 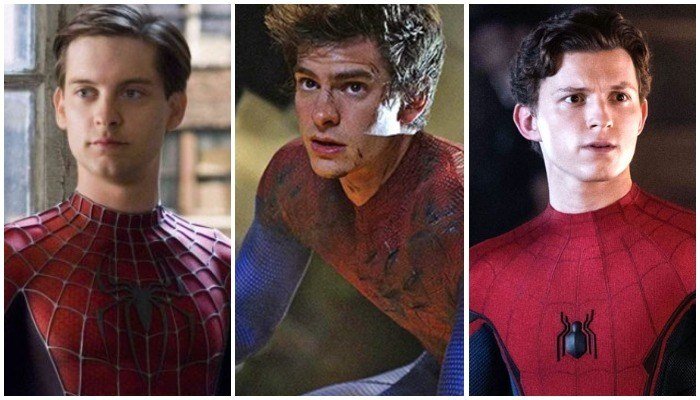 In Spiderman: No Way Home, viewers are treated to the three incarnations of Spiderman (from left): Tobey Maguire, Andrew Garfield, and Tom Holland.

Spider-Man: No Way Home has fans swinging out of their seats, screaming and crying, and leaving even more excited than they were when the film’s first trailer was dropped. Fans agree that there may be a new front-runner for the movie of the year, let alone the best Marvel movie to this date. As a result, Spider-Man: No Way Home is the first pandemic-era movie to hit over one billion dollars at the box office.

Spider-Man: No Way Home starts right where its predecessor ended, jumping right into the death of Mysterio and the reveal of Spiderman’s true identity. After he is revealed to be Peter Parker (Tom Holland), his entire life falls apart and his friends and family also have to bear some of the burden. The film very shortly delves into the trial for the murder of Mysterio, but then gives us something that nobody could’ve foreseen.

Daredevil is introduced into the Marvel Cinematic Universe (MCU) as we see Matt Murdock (Charlie Cox) acting as Parker’s lawyer. His cameo is cut short, but we are given a scene of him catching a flying brick that was thrown through the window. His cameo in this is intended to be more than just a funny scene, however. In Hawkeye, Marvel’s most recent show, Kingpin, who is Daredevil’s rival, was introduced.

This could mean one of two things, the canceled Daredevil show could be renewed, or we could be seeing Daredevil throughout many different Marvel projects such as Hawkeye or even The Multiverse of Madness.

During this period of being “the most famous person in the world,” Parker, MJ (Zendaya), and Ned (Jacob Batalon) are all awaiting responses to their college applications. Their main goal was to go to MIT, but if that didn’t work out, they planned to attend their backup schools. However, all three of them were denied admission to every school that they applied to due to “recent circumstances.”

This is what launches the main plot of the film in which Parker goes to meet Doctor Strange to ask him to make everyone forget that he was Spiderman. The spell fails horribly because Parker asks if everyone who knew who he was before could still remember him. This line is central to the rest of the movie because in the very next scene Parker comes face to face with Doc Ock, with the one and only Alfred Molina reprising his iconic role.

Willem Dafoe also reprises his role as the Green Goblin. Not too much later we also meet the Lizard (Rhys Ifans), Sandman (Thomas Haden Church), and Electro (Jamie Foxx). After capturing all the villains, Parker wants to save them from death in their universes which is not what Strange wants to deal with. Parker and Strange fight in the mirror dimension which treats the viewer to some very cool visuals that fans have not seen since the first Doctor Strange movie.

The movie could end at any point during this time, and it would still be an amazing movie, but it just continues to get better. One of the most notable performances comes from Dafoe. The way he changes from being the kind, innocent Norman Osborne to the evil villain Green Goblin is incredible.

Dafoe’s performance is the best as a villain since Heath Ledger played The Joker in The Dark Knight. His acting is at its best during the scene in which Parker attempts to help all the villains. He is able to fix Doc Ock’s claws so that he is now in control of them, but is unable to fix anyone else since Green Goblin destroys the place. Parker and the Goblin get into one of the greatest MCU fight scenes fans have ever seen, which ends with the death of Aunt May and the escape of all of the villains.

After May’s death, Ned and MJ have been trying to contact Parker for hours, but do not get a response. Somehow Ned is able to use the ring given to him by Parker after he took from Doctor Strange to make portals to find Parker. A portal opens and out comes a very familiar face, Andrew Garfield.

Ned opens another portal and out comes another familiar face, Tobey Maguire. At this point, the audience is jumping up and down, yelling, clapping out of pure happiness and excitement. The reaction from the audience was bigger than any reaction in Avengers: Endgame. All of those leaked pictures, theories, and rumors were true. This single scene turns Spider-Man: No Way Home into a masterpiece.

Garfield and Maguire find Holland and help him find his way again. They talk to him about their own tragedies with their Uncle Ben and for Garfield, it was Gwen Stacy. Holland says that the last thing May said to him was “With great power …“ and, in unison, both Garfield and Maguire finish with “comes great responsibility.” They get started on making cures for all of the villains.

This scene is one of the best scenes in the entire movie. All three Parkers talk about their own pasts, the things they share in common, and things that they learned by being Spiderman. One of the best things here is how Garfield and Maguire talk about how their best friends turned evil and tried to kill them, but they eventually died.

We finally reach the finale after almost two and a half hours, but who’s counting? All three Spidermen are in their suits and ready to face their old rivals. There isn’t more fans could ask for than seeing all of them swinging next to each other and then landing in their iconic positions and jumping to fight some of the best villains ever.

At the end of the incredible fight scene, Holland goes to finish off the Green Goblin as revenge for his Aunt May, but Maguire jumps in front of him and stops him. Both he and Garfield know that once he’s killed, he won’t stop. However, Maguire is stabbed by the Goblin after saving him. Holland realizes what he must do and gives Osborne his cure to get rid of the Green Goblin.

Doctor Strange comes back after most of the villains have been cured and realizes that he was wrong; however, the spell goes out of control once again and we see outlines of hundreds of iconic Spiderman villains and allies. Holland knows that he must make everyone forget who he is, even his best friend and his girlfriend.

One of the central plot points in the movie is how Parker wants Ned and MJ to live a normal life, but he more often than not needs their help, friendship, and love because without them and Aunt May, he has nobody. Parker always prioritizes his friends’ safety over everything else, especially in this movie, so when he has to tell them that they were going to forget who he was, it wasn’t easy.

It’s not very often that a movie will have viewers extremely excited, jump up and down, make them hate a villain, and also make them tear up. This movie succeeds in all of those areas. It is without a doubt the best Marvel movie and one of the best superhero movies ever.