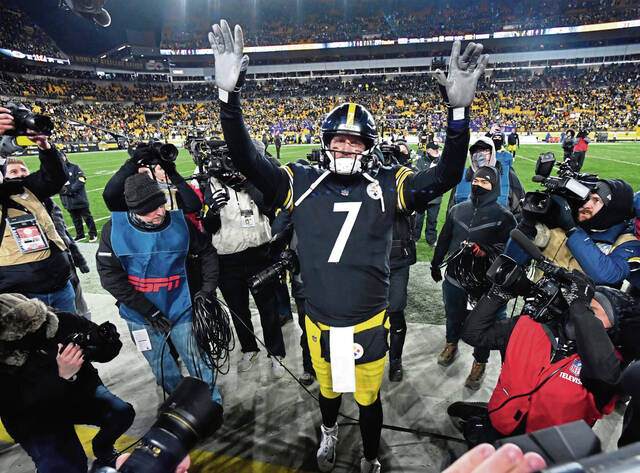 Pittsburgh Steelers quarterback Ben Roethlisberger will most likely be waving bye-bye to his career at the end of the Steelers wild card playoff game vs. the Kansas City Chiefs on Sunday.

Thirty-two teams entered the 2021 NFL season with aspirations of winning a championship, 14 teams  – 13 if you ask Steelers QB Ben Roethlisberger – remain in contention for Super Bowl LVI in Los Angeles. This year’s wild card weekend features six matchups that are sure to have NFL fans on the edge of their seats. Here’s what The Torch’s co-sports editors, Mason Silverstein and Brayden Schultz, are thinking as the race to the Lombardi Trophy truly begins.

(5) Las Vegas Raiders @ (4) Cincinnati Bengals (Sat., Jan. 15, 4:30pm) Line: CIN -5.5
Mason: In the first postseason game of their careers, Derek Carr and Joe Burrow will face each other in the first wildcard game. The key factor for the Bengals is the offensive line protecting Joe Burrow from the pass-rush of Maxx Crosby. The key factor for the Raiders in this game is stopping the connection between Joe Burrow and Ja’Marr Chase. The Bengals offense might have lost to the Browns in week 18, but they will continue their strong season at home this week. Prediction: Bengals 31  Raiders 21
Brayden: Fun Fact: no one has ever sent a text about the Bengals winning a playoff game. More specifically, the Bengals last won a playoff game on January 6, 1991, and the first text was not sent until December 3, 1992. However, this ridiculous streak might come to an end Saturday. Also, a 5-seed has beaten a 4-seed in the NFL playoffs every year for the past four years. The Raiders are coming in having won four straight games, including their SNF overtime thriller against the Chargers that thrust them into the playoffs. They love to play teams close, having won all four of those games by a combined 12 points. If the Bengals passing attack gets going early, this game can get ugly, but Raiders star pass-rusher Maxx Crosby keeping Joe Burrow under siege can push Las Vegas into round 2. Prediction: Raiders 26  Bengals 23

(6) New England Patriots @ (3) Buffalo Bills (Sat., Jan. 15, 8:15pm) Line: BUF -4.5
Mason: The Patriots and Bills have practiced all week in cold atmospheres, as the weather is predicted to be close to zero. The Bills have allowed Damien Harris to produce 100-yard performances in both matchups this season, so they must work on stopping the run. The Patriots’ offensive line needs to be able to hold down the Bills’ defense, who has recorded 19 sacks and 27 quarterback hits in the last four weeks of the season. The Bills will continue their four-game win streak against Mac Jones and the Patriots this week. Prediction: Bills 31  Patriots 17
Brayden: As @elitetakes on Twitter said, “I will be deciding my pick for Bills vs. Patriots ENTIRELY based on the Buffalo weather forecast.” It appears that the forecast will be cloudy with temperatures freezing below zero degrees. No rain is expected during game time, so perhaps Mac Jones will throw more than three passes this time. These teams split their season series, with the Bills getting the better of Bill Belichick’s bunch in their most recent battle. Now, at home, with playoff experience, against a rookie quarterback, on a four-game win-streak, I’m rolling with Bills Mafia in this game. Prediction: Bills 27  Patriots 20

(7) Philadelphia Eagles @ (2) Tampa Bay Buccaneers (Sun., Jan. 16, 1:00pm) Line: TB -8.5
Mason: The Eagles will make a playoff appearance against the Super Bowl 55 champs, but the Bucs will be without WR1 Chris Godwin. The Eagles must get in a good rhythm on offense early to have a chance at winning this game, or they will quickly fall behind. The Buccaneers have too many weapons on offense, leaving the Eagles with trouble on defense. Prediction: Buccaneers 38  Eagles 13
Brayden: It will be a dark and stormy day when the Eagles fly south to take on the reigning champs in their tropical kingdom of Tampa Bay. Philadelphia comes in after a demoralizing loss to their division rivals, the Cowboys, and the Bucs, despite winning three straight, looked very vulnerable in that game against the Jets two weeks ago. In what should be a run-heavy contest, the Bucs are getting back running back Leonard Fournette, who was fantastic in last year’s playoffs. I expect a sloppy, gritty, tough game, where Tom Brady emerges victorious. He tends to do that from time to time. Prediction: Buccaneers 24  Eagles 13

(6) San Francisco 49ers @ (3) Dallas Cowboys (Sun., Jan. 16, 4:30pm) Line: DAL -3
Mason: In one of the most exciting games of the wildcard round, two high-powered offenses will face off at AT&T Stadium. The Cowboys will have to learn how to stop George Kittle and Deebo Samuel, while the Niners need to focus on putting pressure on the quarterback, Dak Prescott. In a close game, the Niners will pull away with the upset.  Prediction: 49ers 38  Cowboys 35
Brayden: Twenty-seven years after their last playoff meeting in the 1995 NFC championship game, the 49ers-Cowboys playoff rivalry has been renewed. 49ers head coach Kyle Shanahan’s father Mike Shanahan was the offensive coordinator for the 49ers in the early 90s when the rivalry was at its peak. The Cowboys boast the #1 offense in football in total yards per game, along with the odds-on favorite for defensive rookie of the year, Micah Parsons. The 49ers have the wild card weapon in Deebo Samuel, who the Cowboys will have trouble neutralizing for all 60 minutes. I give the 49ers the edge in this one on the road. Prediction: 49ers 31 – Cowboys 28

(7) Pittsburgh Steelers @ (2) Kansas City Chiefs (Sun., Jan. 16, 8:15pm) Line: KC -12.5
Mason: It is hard to pick against the Chiefs in this game, as they beat the Steelers 36-10 earlier in the season. Pittsburgh will have to move the ball down the field, or they will not be able to compete with the high-scoring Chiefs. It will not be as big of a margin, but the Chiefs will come out on top in this game. Prediction: Chiefs 30  Steelers 24
Brayden: When your quarterback tells the media “We don’t have a chance,” to win in the playoffs, that’s probably not a good sign. The Chiefs just beat the Steelers 36-10 at home on December 26, and I expect similar results this Sunday night. Ben Roethlisberger’s career will end in a blowout, which is a sad way to go for the future Hall of Famer. Prediction: Chiefs 41  Steelers 16

(5) Arizona Cardinals @ (4) Los Angeles Rams (Mon., Jan. 17, 8:15pm) Line: LAR -4
Mason: In one of the most exciting matchups, Kyler Murray will face Matthew Stafford. The Cardinals will have to find a way to stop Cooper Kupp in the red zone, along with the rest of the Rams line of wide receivers. The Rams must keep Kyler Murray from escaping the pocket, as they must adjust their defense from being zone-heavy as Murray has killed zone coverages all season. The Rams will come out of the brawl with a win as they attempt to bring this high-powered team to the Super Bowl. Prediction: Rams 31  Cardinals 24
Brayden: The Cardinals seem to be following a pattern these last couple of years where Kyler Murray starts the season looking like the frontrunner for MVP. Then, he gets injured and he doesn’t come back looking quite like the same player he was pre-injury. Then people wonder if teams have “figured the Cardinals offense out” and the debate arises over whether they really are contenders or just pretenders. They come into this game in Los Angeles having lost four of their last five and losing the NFC West title to the Rams themselves. Speaking of the Rams, they’ve won four of their last five games, and boast a roster that includes three NFL first-team all-pro players. Cooper Kupp led the league in receiving yards, receptions, and touchdowns, and Jalen Ramsey and Aaron Donald are both widely regarded as the best in their respective positions. It’s Goliath vs. Goliath in this matchup, but one of them has to win, so I’m going with the home team. Prediction: Rams 33  Cardinals 26