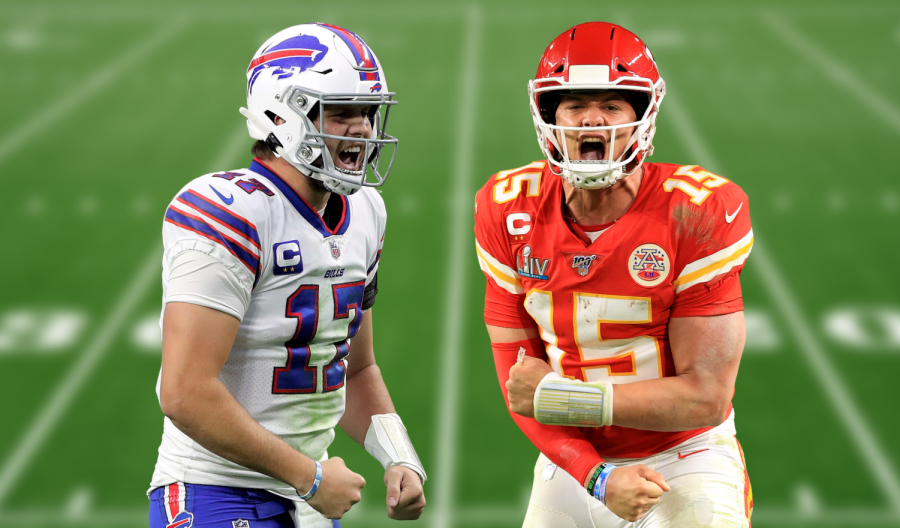 Quarterbacks Josh Allen of the Buffalo Bills (left) and Patrick Mahomes of the Kansas City Chiefs will lead their powerhouse offenses into the highly anticipated Sunday night showdown during the NFL's Divisional Playoffs round.

Fourteen teams have been dwindled down to just eight after the NFL’s Super Wild Card Weekend. The wild card round gave us four blowouts, the “Whistle Rule” game and Cowboys fans throwing garbage at officials post-game. With just four games this weekend, the matchups are tougher and the stakes are higher. Here’s who The Torch co-sports editors Mason Silverstein and Brayden Schultz believe will make the NFL’s final four:

(4) Cincinnati Bengals @ (1) Tennessee Titans (Sat., Jan. 22, 4:30pm)  Line: TEN -3.5
Mason: Joe Burrow will enter Tennessee after his first career playoff win, ending the Bengals postseason drought of 31 years. Derrick Henry will return this week, hungry to get back on the field after being injured in week 8. The key to a Tennessee win will be utilizing Derrick Henry by playing run heavy on offense. The Bengals defense will need to stop the run, along with the offensive line needing to protect Burrow and giving him time to throw the ball against a solid Titans defense. If Tennessee struggles to run the ball early, it might be hard to keep up with the Bengals offense. This is exactly why the Bengals will come away with a win in this game.  Prediction: Bengals 21 Titans 17

Brayden: The Titans are coming out of their bye week strong. Literally. Their 6’ 3”, 247-pound behemoth of a running back Derrick Henry is returning from a foot injury that prematurely ended his regular season in Week 8. Will he be the same guy he was then? It’s hard to say, but it’s definitely not a good idea to underestimate the former 2,000-yard rusher. I’ve seen him carry this team to victory before; it would not surprise me to see him do it again. The Bengals have been and continue to be America’s sweetheart, and it just might be their year. Their stars have been healthy all year; everyone on the team, the defense in particular, has exceeded offseason expectations. It just seems like everything has tended to fall in their favor this season: exhibit A being the whistle rule play in last week’s game. It’s possible that the Bengals could get lucky again, but I’ve underestimated the Titans enough this season to have learned my lesson. Fool me once, shame on you. Fool me twice, shame on me. Titans in a close one. Prediction: Titans 23  Bengals 20

(6) San Francisco 49ers @ (1) Green Bay Packers (Sat., Jan. 22, 8:15pm)  Line: GB – 5.5
Mason: Jimmy Garoppolo comes off a win from last week against the Cowboys, but currently has a strained shoulder and torn UCL in his thumb. While dealing with this, he will face the pressure of Kenny Clark and Za’darius Smith. Last week, Elijah Mitchell ran the ball 27 times for 96 yards, along with one touchdown. Between the threat of running the ball with Mitchell and the threat of Deebo Samuel running on the outside, it gives the Niners a great chance to confuse the Packers defense. But, it will be hard to stop the power of the Packers offense, especially with Devantae Adams recording 2,927 yards this season and 29 touchdowns. Prediction: Packers 34  49ers 23

Brayden: I’m going to cut right to the chase and announce that I am picking the upset in this game. Yes, the Packers are the number one seed at home and yes, Aaron Rodgers is the odds-on favorite to win MVP for the second year in a row. So why on Earth would I pick the 49ers? Well, these two teams played each other back in week 3, where the Packers came out victorious after a 37-second game winning drive led by, guess who, Aaron Rodgers. However, these teams are very different from the ones we saw in September. Things really started to turn around for the 49ers in week 10 after a convincing win against their division rival and current playoff team, the Los Angeles Rams. Since then, offensive and defensive coordinators Mike McDaniel and DeMeco Ryans, respectively, have really found their groove. The 49ers cruised in the second half of the season, winning eight of their last 10 games, including last week’s thriller against the Cowboys in the wild card round. There are four major differences between this game, and the week 3 game: 1) Elijah Mitchell – in Week 3, it was Trey Sermon who led the 49ers in rushing with a measly 31 yards due to an injury to Mitchell, the usual workhorse. Now, Mitchell is healthier than ever and has been huge for the 49ers on the ground. He rushed for 963 yards and five touchdowns in the regular season and chalked up another 96 yards and a touchdown last week in Dallas. The 49ers will look to lean on him this weekend in the run game. 2) Deebo Samuel – Samuel ran the ball just twice for zero yards in week 3. It was that week 10 game when Samuel really established himself as a threat carrying the ball out of the backfield. He’s a versatile player who Kyle Shanahan loves to use in a variety of ways. His elusiveness makes him tough to bring down whenever he has the ball in his hands. The 49ers are 7-0 this season when he gets at least five rushing attempts. Last week against the Cowboys, he had 10 carries for 72 yards and a touchdown. 3) Jauan Jennings – Jennings has become the number one receiver for QB Jimmy Garoppolo in situational-football. He’s caught 11 of 12 third down targets this season, earning the highest catch rate of any receiver on third down with at least 10 targets. Twenty-three of his 27 catches this season have gone for either first downs or touchdowns. This is a guy who did not play a single snap in week 3. The Packers have yet to face him. 4) George Kittle – Kittle led the 49ers with 92 receiving yards in Week 3. The usually fantastic tight end, arguably the best in the league, has been quiet over the last month. Since week 16, Kittle has not had over 30 receiving yards in a game. The 49ers will surely have to get him more involved if they want any chance at playing in the NFC championship game.  For those reasons and more, I’m taking the 49ers. Prediction: 49ers 33  Packers 30

(4) Los Angeles Rams @ (2) Tampa Bay Buccaneers (Sun., Jan. 23, 3:00pm) Line: TB -2.5
Mason: This season, quarterbacks have recorded an average of a 65 percent completion rate against the Tampa Bay defense. The Rams will attempt to get Cooper Kupp the ball early, as he comes off the best season of his career. On the other side of the ball, the Buccaneers will return after beating the Eagles 31-15, where Mike Evans had 117 yards on 9 receptions. If he can step up in this game, alongside Gronkowski, Tom Brady should have no issue scoring a lot of points on offense this week. Prediction: Buccaneers 31  Rams 24

Brayden: If you ask most Bucs bettors why they’re betting on the Bucs in this game, they’ll tell you it’s because “you don’t bet against Tom Brady in the playoffs.” Unfortunately, that’s exactly what I’m doing. Sean McVay is a mastermind on both sides of the football and he has his squad playing their best ball at the perfect time. The Bucs, despite blowing out the Eagles, got banged up last week on the offensive line. NFL first team all-pro RT Tristan Wirfs and pro-bowl C Ryan Jensen both left Sunday’s game early, and neither practiced Thursday. Backup OT Josh Wells is also on the injury report. Aaron Donald, Von Miller, and the rest of the Rams’ elite lineup of pass-rushers should have a much easier time putting pressure on the 44-year old QB. The Bucs lack depth at the wide receiver position with Chris Godwin being hurt and Antonio Brown getting released. Also, two key Tampa Bay defenders, Lavonte David and Sean Murphy-Bunting, have also made appearances on the injury report. The Buccaneers are primed to be upset this week. Prediction: Rams 29  Buccaneers 27

(3) Buffalo Bills @ (2) Kansas City Chiefs (Sun., Jan. 23, 6:30pm) Line: KC -1.5
Mason: Josh Allen had five touchdowns against the Patriots in the Wildcard Round, completing passes to nine different receivers. The Bills defense has been scary towards the end of the season, having three sacks and two interceptions last week. The most interesting matchup will be seeing how Patrick Mahomes can hold up against the Buffalo pressure. The Chiefs offense arguably has the best wide receiver and best tight end in the league. If Tyreek Hill and Travis Kelce get a lot of open space, it might be hard for the Buffalo defense to adjust. Although this might pose a problem for the Buffalo Bills, they will score enough on offense to cause the upset.  Prediction: Bills 42  Chiefs 41

Brayden: The Bills blew out Bill Belichick’s bunch in a battle that had the city of Buffalo buzzing. Josh Allen led his offense to the first “perfect game” in NFL history, where they didn’t punt, kick a field goal, or turn the ball over a single time. It was touchdown after touchdown for the Bills en-route to a 47-17 dismantling of the Patriots. Meanwhile, the Chiefs sent off hall-of-fame quarterback Ben Roethlisberger by scoring 21 points in the last six minutes of the first half on their way to a 42-21 destruction of the Pittsburgh Steelers. Now, these two teams, who combined for 89 points in the Wild Card Round, meet again for a rematch of last year’s AFC championship game, which sent the Chiefs to the Super Bowl via a 38-24 victory. With both teams at their strongest right now, I’m taking the Chiefs at home in a shootout. Prediction: Chiefs 37  Bills 31