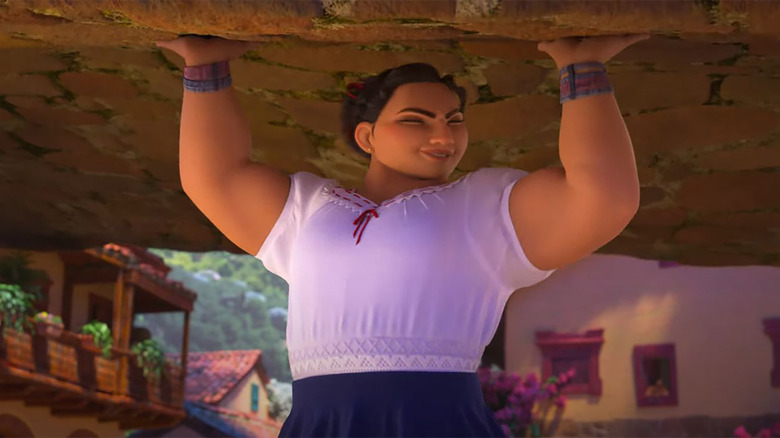 Many have made assumptions about the Encanto character Luisa based only on her appearance.

The Disney film Encanto, released in November 2021, centers around the Madrigal family and their magical house, specifically the character Mirabel. Every member of the family, not including those married into it, have a gift except for Mirabel.

Abuela is the candle holder, Tia Pepa controls the weather, Tio Bruno sees the future, and Julieta heals others with her food. Dolores can hear anything miles around, Isabela sprouts flowers, Luisa is strong, and Camil shapeshifts. Mirabel, however, possesses no such special gift.

The film starts with Mirabel explaining to the younger townspeople the gifts of La Familia Madrigal. This is where the audience learns that Mirabel wasn’t given a gift. Mirabel is seen as the odd one of the family, the black sheep. She tries everything she can to make up for her shortcoming, but she soon realizes her efforts will never be good enough for Abuela.

Encanto has received praise for the way it portrays the Hispanic family and culture. “Disney’s ‘Encanto’ has the Latine representation we’ve all been waiting for,” reads the Washington Square News’ headline for its review by copy editor Lorriane Olaya.

Each member of the Madrigal family experiences a certain trauma most commonly associated with a Hispanic home. This brings out multiple representations of Hispanic families. Additionally, the characters don’t all look the same, a characteristic found in many animated films featuring Hispanic characters. Each member of the Madrigal family has their own unique look with different skin tones, showing the diversity of the Hispanic ethnicity.

However, Disney’s best efforts aside, American white culture just couldn’t leave the Madrigal family characters be. Some re-representations of these characters on social media have undermined what Disney accomplished. Many TikTokers, including artists, have whitewashed the darker skin characters such as Isabela and Dolores.

Along with this, some members of the LGBTQ+ community have head-cannoned the sexuality of many of the characters, including Luisa, who is seen as the strong one and has everything put on her shoulders.

Luisa represents the struggles Hispanic women go through being part of a more masculine culture, struggles sometimes compounded by members of their own community. But because Luisa is strong in both her personality and physicality, many have assumed she is lesbian or trans. There are those in the LBGTQ+ community that have celebrated her character as such, even though there is nothing in the film to promote this notion.

Not only does this undermine her representation as a Hispanic woman, but it also brings up underlying issues of others over masculinizing trans women by our culture. Many female people of color encounter this stereotype. Luisa is meant to be a Hispanic woman who finds herself carrying her family’s weight. By the end of the film, she is seen as more feminine and relaxed.

Of course it is important for other minorities to be represented in the media but it is wrong to steal representation from another minority. People of all cultures find Encanto uplifting and appreciate Disney’s objective to represent more minorities. Still, those who are mis-representing the film’s characters on social media are white or lighter skinned.

OH sophomore Ana Mendez, who is troubled by this mis-representation, comments, “The world is full of diverse people of different races and different ethnic features- white isn’t the only race;, it is not the superior race.”

While white Hispanics exist, many Hispanic families consist of darker-skinned members. The film Encanto was not to better represent the white culture but the individuality and life of a Hispanic family. The film shows the main character breaking through the narrative others set for her, allowing her to express herself. It is important that more films like this are created for many more ethnicities and people of color.

It is also important that the audience members that don’t relate to the film are not stealing the representation of the film to feel better represented themselves.