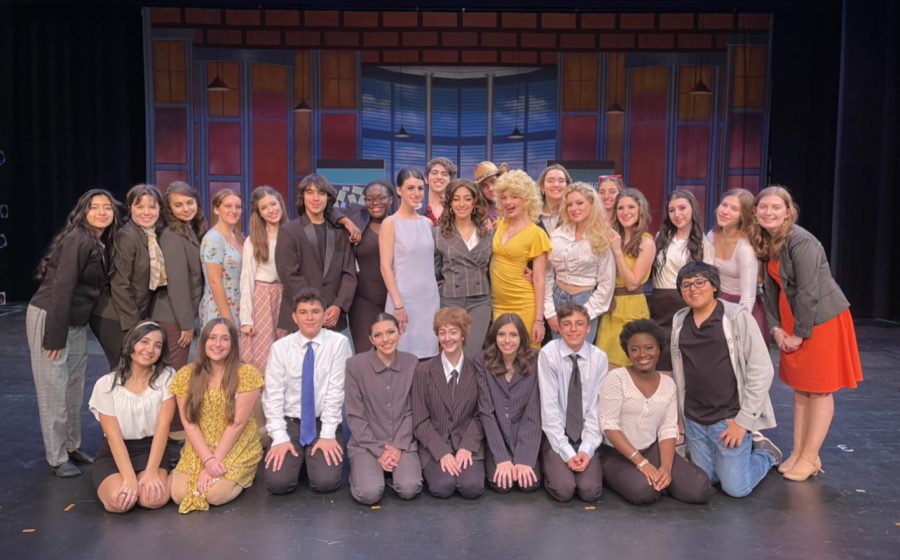 The cast of the Olympic Heights Theatre Department's production of the musical-comedy 9 to 5.

It was an eventful Valentine’s Day weekend for the Olympic Heights Theatre Department as it staged four performances of the musical-comedy 9 to 5, under the direction of Performing & Fine Arts Department Chair and Theatre Director, Ms. Kimberly Coyle.

9 to 5 is a 2008 play based on the 1980 film of the same name, with music and lyrics by Dolly Parton, and tells the story of three women, Doralee, Judy, and Violet, who work under a sexist, manipulative boss.

The hijinks begin when the women hang out after work one day and jokingly plan how they would get rid of their boss, Mr. Hart, in a dream world. The next day, when Violet makes Mr. Hart’s coffee, she accidentally mixes rat poison, confusing it with the sweetner box, into his drink. The boss is completely fine but is informed of what happened, leading the women to panic, kidnap, and tie him up at his house.

In his absence from the office, the ladies work together to transform their workplace into a safe, happy environment and a place that women feel welcome. In the end, the boss escapes and confronts the women.

Coincidentally, at the same time, Mr. Hart’s boss arrives to check in on how things are going. He informs both Hart and the three women that their leadership greatly improved the company. Their memos caused an increase in production for their company’s branch. The boss’s happiness with the women’s improvements leads to the promotion of Violet to the CEO of their office, removing their old boss for good.

The OH production of 9 to 5 was hilarious as the cast clearly put in a lot of work in rehearsals and on their own.  There was a lot of emotion put into their impressive performances. “The musical overall was excellent,” OH Junior Rebecca Lyon expressed. “The costuming and sets were amazing, and everyone made the show well by putting a lot of emotion into it.”

The three leading actors, OH seniors Lily Rosenthal, Jade Krickstein, and Isabelle El-Yateem, did an amazing job. Their performance most definitely showed the amount of work that they put into perfecting their performances. Their harmonies were beautiful and clear. They were most definitely the right choices for the characters as all of the ladies were extremely capable and impressive.

One of the several highlights of the show was Rosenthal’s  solo performance of “Get Out And Stay Out” in the second act. This song is about her character finally breaking free from her controlling ex-husband. Rosenthal used emotion and powerful vocals to convey her character’s feelings to the audience, evoking a thundering applause. This was especially heartwarming because according to Rosenthal, it was too hard for her to perform her freshman year, though clearly that has changed.

Another impressive aspect of the musical was Krickstien’s ability to both speak and sing in a convincing southern accent while playing her character Doralee.

The production even overcame what could have been a disastrous setback when an unforeseen event required a last minute casting change in the lead male role of Mr. Hart. However, senior Madi Sklar took the part of the egotistical boss and made it her own. She quickly memorized all of her lines, rehearsed the songs, and absolutely owned her hilarious solo “Here for You.” Sklar’s performance was truly comedic.

The OH Drama Department put on an impressive performance, showcasing each and every cast member’s talents. They effectively conveyed the musical feminist themes through a comical approach that had the whole audience laughing and cheering.