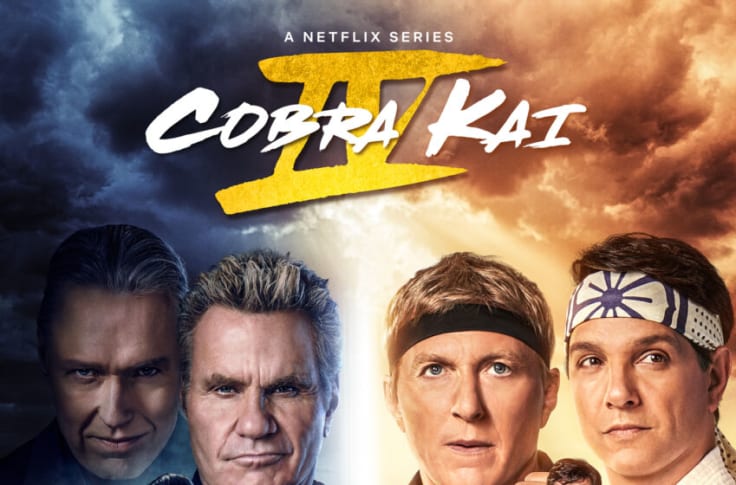 The number one most-watched show on Netflix is Cobra Kai, which released season four on Dec. 31, 2021. Over 73 million households spend over a whopping 120 million hours watching Cobra Kai in one week.

Season one of Cobra Kai aired May 2, 2018, but it did not catch on with as many viewers when it was first released. Due to the pandemic forcing people onto Netflix and other streaming services due to movie theaters being closed, the show started gaining traction.

The series shares some of the same actors as The Karate Kid, the 1984 film on which it is based. The director does a great job representing the roles that the actors played nearly forty years ago.

At the end of season three, John Kreese (Martin Kove), calls his friend with whom he ran the original Cobra Kai dojo to team up against Daniel LaRusso (Ralph Macchio) and Johnny Lawrence (William Zabka). LaRusso and Lawrence’s two dojos, Miyagi-Do and Eagle-Fang, team up. This teaming is necessary to compete in the All-Valley Karate Tournament against Cobra Kai.

In season four, LaRusso and Lawrence’s combined dojo has risen and fallen. The partners each return to their respective dojo to complete their mission to win the All-Valley. Also, in season three, the two former partners strike a deal with Kreese containing a challenge: whoever loses the tournament gives up their dojo.

With this in mind, Eagle-Fang and Miyagi-Do both are attempting to train their students for the tournament. Kreese’s phone call leads to his former partner, Terry Silver (Thomas Ian Griffith). After Kreese gets into Silver’s head, he leaves his luxurious lifestyle to teach the Cobra Kai students what it means to strike first and hard.

Although Silver and Kreese were once best friends and got along well, this was not the case this go-around. Silver becomes extremely aggravated when Kreese disrespects him in front of his students, so he seeks revenge against him. Now the All-Valley Tournament is underway. The trophy is up for grabs late in the tournament, but Miguel gets injured which leads to a loss to Cobra Kai in the Boys Final for Eagle-Fang. The Girl’s Final match comes down to Sam LaRusso versus Tory Nichols of Cobra Kai.

The girls’ fight is very close, but Tory let off an elbow that should have cost her a point deduction. Cobra Kai ends up winning the All-Valley Tournament. Silver then crosses over Kreese to make him the only sensei of Cobra Kai, which is how this season ends.

Overall, this season is extremely well-plotted and executed. There were lots of cliffhangers this season, such as the winner of the deal between Kreese and the other two dojos. On Rotten Tomatoes, the show has earned an impressive 94 percent rating.

Olympic Heights sophomore Jon Robson said that he was expecting Cobra Kai season four to be great and he wasn’t disappointed. OH sophomore Jake Greenberg agreed with Robson, stating that the whole show has left him stunned. Both Robson and Greenberg expect an even better season five, which is expected to release in late 2022.