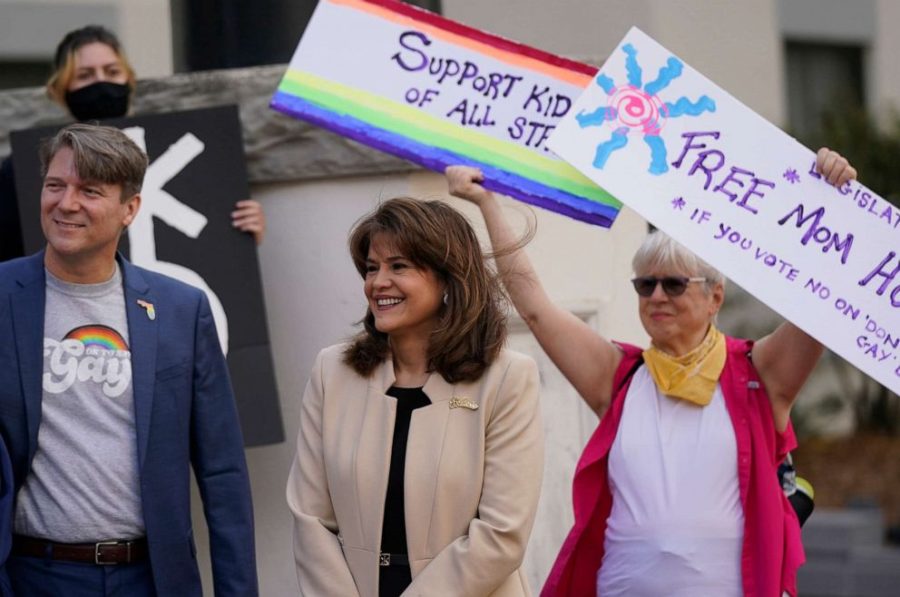 The Parental Rights in Education bill, dubbed the “Don’t Say Gay” bill by its opponents, has now passed both the Florida Senate and House and is headed to Gov. Ron DeSantis’ desk for his signature.

The legislation limits what can be taught in Florida’s public schools about sexual orientation and gender identity. Under the legislation, such lessons “may not occur in kindergarten through grade 3 or in a manner that is not age-appropriate or developmentally appropriate for students in accordance with state standards.”

DeSantis, who has indicated support for the bill but hasn’t explicitly committed to it, is expected to sign the bill, which would become law on July 1, 2022. LGBT+ advocates believe the bill will have a detrimental impact on students and the learning process. The bill also allows for parents to sue schools or teachers that engage in such lessons.

The bill is specific to students in kindergarten to third grade; however, it could be applied to higher grade level classes. It is unclear how this bill would affect high school classes.

The bill’s sponsors, Rep. Joe Harding (R-Williston) in the House and Sen. Dennis Baxley (R-Ocala) in the Senate, believe the bill is necessary because some Florida schools are counseling minor LGBT+ students without parental knowledge or consent. They cite a Tallahassee middle school where staff developed a “Transgender/Non-Conforming Student Support Plan” for a student as evidence.

“The staff asked the girl how she wanted to be identified, what pronouns to use when speaking about her, whether she wanted to use the girls or boys bathroom, and whether she felt more comfortable rooming with boys or girls on overnight trips,” reported The Daily Citizens. “The support plan ‘indicated that their daughter was ‘comfortable’ rooming overnight with either boys or girls’ and ‘said that her parents were not to be notified (emphasis in press release).’”

While it is understandable for the government to want to ensure parents are involved and know what is going on at school, this bill can also hinder the education of every child in the state, and put the mental, physical, and emotional well-being of the LGBT+ student at risk.

DeSantis has taken several openly anti-LGBT+ actions in the past, having stripped all LGBT+ programs in the state of funding. Additionally, DeSantis signed the Fairness in Women’s Sports Act on June 1, 2021, banning transgender females from participating in girls’ sports. Florida’s anti-LGBT+ governor has also vetoed counseling funds for survivors of the June 12, 2016, Pulse gay nightclub shooting in Orlando, which left 49 dead and 53 wounded.

DeSantis recently said that he doesn’t support “injecting these concepts about choosing your gender” at school. DeSantis explains that his goal is to educate. “At the end of the day, you know, my goal is to educate kids on the subjects — math, reading, science — all the things that are so important,” DeSantis said. “I don’t want the schools to kind of be a playground for ideological disputes or to try to inject,” WTSP Tampa reported.

DeSantis said at a press conference that the bill “says no sexual instruction in grades pre-K through three, and so how many parents want their kindergartners to have transgenderism or something injected into classroom instruction.”

Olympic Heights principal Ms. Kelly Burke has not received guidance from the School District of Palm Beach County regarding curriculum for classes, such as AICE Global Perspectives, which require the discussion of controversial topics or how this law will be enforced but admits it will be a difficult task.

Burke believes that the bill’s passing “will have a huge impact on LGBTQ students. Teachers have to build trusting relationships with students in order for them to be successful,” Burke explained. ”Students should not have to hide who they are or how they feel when they are at school. This should be a safe place for them.”

The School District of Palm Beach County has been considering sending a letter to state lawmakers addressing the school district’s displeasure with this bill and explaining to the state how this will affect the education of all students in Florida, and harm the emotional states of those students who identify as a part of the LGBT+ community.

According to WPTV West Palm Beach, “In the proposed letter to state lawmakers, Palm Beach County Superintendent Mike Burke and all seven school board members said they ‘stand firmly against any legislation that would compromise acceptance and respect for our students based on race, religion, ethnicity, disability, sexual orientation, gender identity, or any other demographic targeted for discriminatory exclusion.’ The letter continues to detail that they “must stand up for hate in every form and fashion.”

On Feb. 23, the School District of Palm Beach County conducted a unanimous vote to send a letter to the state denouncing this bill. “In the letter, leaders agreed HB 7 and SB 148 ‘represents censorship and would compromise an educator’s ability to teach honest LGBTQ history, Black history and the historic reasons behind gender and race discrimination. Together, these measures compromise the ability for a student to receive a comprehensive education,” WPEC West Palm Beach reported.

WPEC added, “According to the school district, in Palm Beach County schools, nearly 30% of lesbian, gay and bisexual Palm Beach County students were teased for their identities, 40% engaged in self-harm and nearly 35% considered suicide.”

If this bill is signed into law, it can prevent students from learning about something that has become normal in today’s society. Discussing the LGBT+ community in class can only help students become more well-rounded, accepting individuals. OH English teacher Ms. Deborah Posner explains that she wants her classroom to be a reflection of a compassionate world in which she has a desire to live.

Because of this, Posner exposes her students to realities that may not reflect the beliefs of the majority of her students but believes that this makes them more open-minded individuals. “Students have felt safe enough to come out to me and the whole class when they couldn’t even do so at home,” Posner explained. “That’s the world I want to live in, one where we all feel respected. The bill negates these goals and will only alienate people and create more divisiveness in an already too divided world.”

“The Florida government introducing a bill that bans teachers from discussing LGBT-related topics in schools isn’t just a violation of [transgender people’s] first amendment right to freedom of speech, but a downright dangerous move that could result in increased anxiety, depression, and suicidality in LGBT students,” a transgender School District of Palm Beach County class of 2018 graduate wishing to remain anonymous explained. “LGBT+ students often feel alone, and preventing discussion of LGBT-related topics at school will further that feeling of loneliness and perpetuate the idea that it is somehow shameful to be part of the LGBT community. This would be a disgraceful move for Florida.”

Education is how people learn to be kind to one another and not alienate someone just because they are different. Forbidding teachers from educating students about a topic many of them may deal with in their lives, whether they know someone who is a part of the LGBT+ community, or they themselves are, may make them feel like being different is not acceptable and that it is something they should be ashamed of. This can make a student uncomfortable in class, which is not conducive to learning.

LGBT+ advocates believe that precluding teachers from teaching students that they can be who they are without being ashamed of themselves will hinder student confidence building and growth into mature, responsible young adults. Without the education and support from teachers, some students may feel even more alienated.

OH AICE Psychology teacher Dr. Seth Alper believes that “the ‘social education’ of children can be hindered of understanding (but not agreeing with) different viewpoints” as a teacher-led discussion can help students discuss such a controversial topic in a civil manner. An in-class debate or discussion can help students understand other points of view which don’t necessarily align with their own.

Not only can prohibiting the discussion of the LGBT+ community in class hinder the social and emotional learning of students, but if this bill is passed, it can set all students up to fail. This is because some classes, such as AICE Global Perspectives, AICE General Paper, and AP Government and Politics require the discussion of current events and controversial topics, as the AICE and AP exam topics relate to current events.

OH AP Government and Politics teacher Ms. Chelsea Fink believes that this bill will prevent her students, and others, from being properly prepared for the AP exam. “Part of my curriculum as assigned by CollegeBoard is to cover the LGBT rights movement and many landmark Supreme Court cases that affect the LGBT+ community such as Obergefell v. Hodges (2015), Lawrence v. Texas (2003), Masterpiece Cakeshop v. Colorado Civil Rights Commission (2018) and others,” Fink explained. “Students in Florida who are forbidden from discussing or hearing about LGBT+ issues in Florida classrooms because of this bill will be at a disadvantage compared to their peers in other states who are allowed to engage in this material.”

As students struggle with figuring out who they are in the world, some also struggle with their gender identity or sexuality. LGBT+ advocates believe that having these imperative conversations in class can only serve to help students who need it most, while anti-LGBT individuals believe teachers should not discuss controversial topics, as it can be an uncomfortable topic for some students.