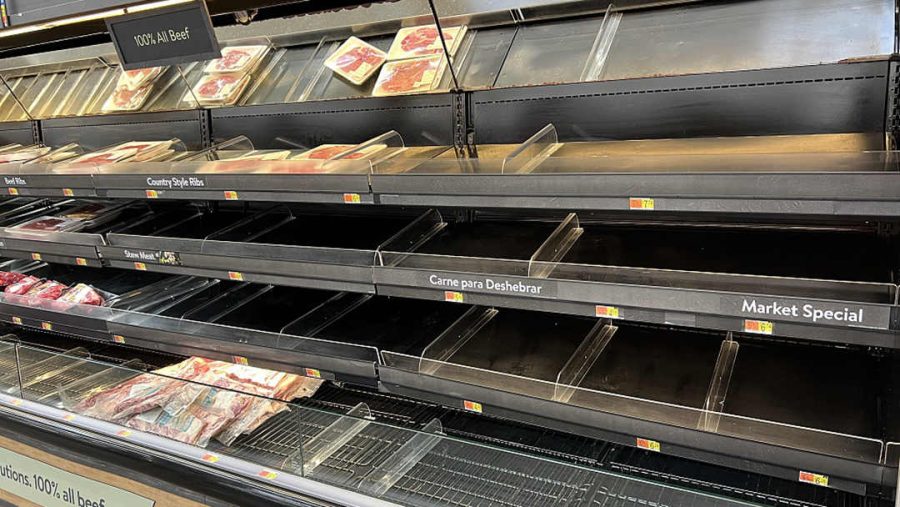 Grocery stores are struggling to keep their shelves stocked as a food shortage resulting from the Russian invasion of Ukraine compounds the shortage caused by the COVID-19 pandemic.

At a press conference following meetings of the North Atlantic Treaty Organization (NATO) and G7 leaders, President Joe Biden said to expect a food shortage, which he says will be “real.” The president expects the entire world to be short on food as Russia and Ukraine produce about a fourth of the world’s wheat and those two countries are at war.

“Since the Russian invasion of Ukraine last month, wheat prices have increased by 21 percent, barley by 33 percent and some fertilizers by 40 percent.” Currently, about 10 percent of the world’s population is hungry, and “economists, aid organizations, and government officials are warning of the repercussions: an increase in world hunger,” stated The New York Times.

As Americans have already seen a major increase in grocery store prices, they can only expect those prices to rise. The New York Times continues to explain that U.S. government data suggests that grocery store prices have risen more than 8 percent since February 2021, which is the largest increase in over 40 years. Economists predict that the war in Ukraine will further inflate prices around the world.

“Programs that help people with lower income to get food, such as soup kitchens, will have a harder time providing the same amount of food they used to provide,” says Olympic Heights junior Brenda Lage. “Also, some families might have to ration food so they don’t have to spend too much money.”

On March 11, the Ukrainian agriculture minister begged Ukraine’s allies for over 1,900 rail cars of fuel, claiming that the country’s farms have run out after supplies were diverted to the military. Without the fuel he claims is needed, Ukrainian farmers will be unable to plant or harvest. The farms are also struggling to find people to work, as millions have fled the country. Regardless of this need, the United Nations (UN) predicts that up to 30 percent of Ukraine’s farmland could become a war zone.

With an already unstable political climate in the U.S. and other countries around the world, the rising food prices could fuel even more political distress. Historically, food prices and political unrest have been correlated with one another. With global food markets already strained by the COVID-19 pandemic, economists predict the war’s economic fallout will be particularly painful.

“The effects on poorer countries will be more severe,” comments OH AICE Global Perspectives teacher Mr. Michael Taylor. “In places like sub-Saharan Africa, they are extremely reliant on imported food, and since they are too poor to buy from many, famine could be a consequence. Events like this are usually accompanied by conflict, and so one of the long term effects of this crisis could be war and violence.”

“‘This is compounding an already bad situation,’ Chris Barrett, an agricultural economist at Cornell University,” told foreignpolicy.com. “‘The real worry right now is that the perfect storm comes as we still are not out of the woods from all of the massive economic displacement caused by the pandemic.

When trying to solve this issue, Taylor recommends a slight degree of government interference. “Inflation is a natural consequence of free market economies,” Taylor says. “Many people are resistant to government interference in the economy but in times like this, history has proven that a degree of regulation can help steady prices. Prices rise because companies want to keep their profit margins high.”