Offense fails to capitalize as Lions fall to John I. Leonard 6-3 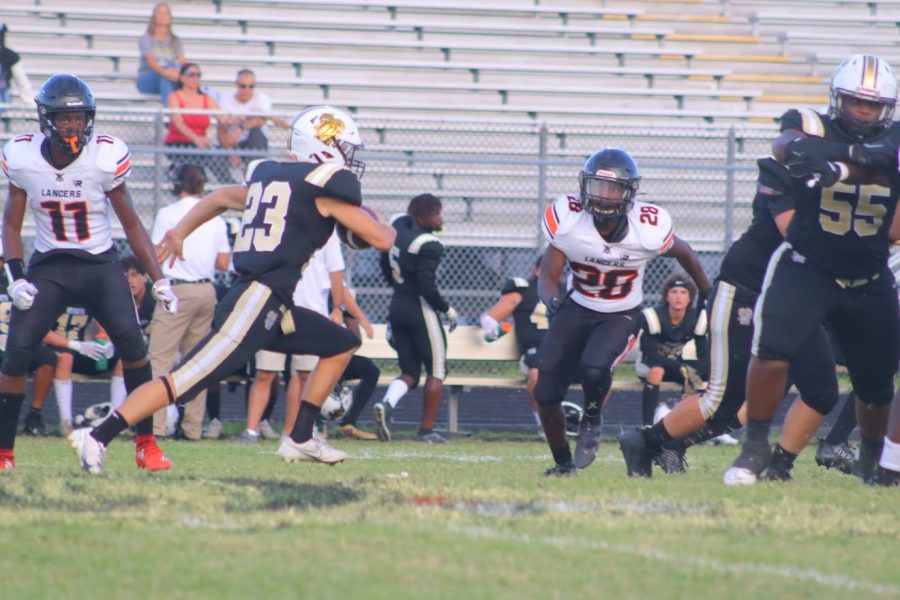 Lions running back Sean Lutin (#23) breaks into the John I. Leonard secondary in the 6-3 loss on Thursday, Sept. 1.

In what can only be described as an upset, the Olympic Heights football team was dealt a surprising loss by the John I. Leonard Lancers on Thursday, Sept. 1, losing 6-3. The loss, coming on the heels of a 14-12 win over Suncoast the week before, drops the Lions record to 1-1 on the young season.

All the scoring in the game came in the first quarter with the Lancers striking the first blow with a 67-yard drive on its opening possession to take a 6-0 lead. The point after attempt was blocked by Lions’ defensive end Parker Poloskey.

The Lions looked like they were going to answer on their next possession as they went on a 49-yard drive featuring two runs totaling 19 yards by running back Sean Lutin and a 17-yard pass from quarterback Shawn Key to receiver Griffin Welch to get the ball to the Leonard 5-yard line. But the drive stalled there with the Lions settling for 22-yard field goal by placekicker Braden Kimmel at the end of the first quarter. The 6-3 score would stand for the remainder of the game.

The OH defense was tenacious for the remainder of the game, stopping the Lancers’ offense on their next seven possessions, three stops coming on interceptions by safety Hunter Gilman, cornerback Bill Charles, and safety Javier Mucino.

The Lions’ offense was unable to capitalize, however, as mistakes and turnovers put a stop to drives that saw the Lions get into Lancer territory on five different possessions. The closest the Lions came to taking the lead was when they drove to the Lancer 15-yard line early in the fourth quarter, only to see that opportunity disappear when a Kay pass was intercepted by Leonard in the end zone.

The Lions will next face the Santaluces Chiefs in a home game on Thursday, Sept. 8. Kickoff is at 6:30pm.